Houseboats on the Prinsengracht, Amsterdam. Photo by Victoria Looseleaf.

Ah, Amsterdam, thy name is freedom, beauty and culture, with your denizens, the hearty and wonderful Dutch folk, making it all possible.

Freedom, of course, includes the many marijuana coffee shops and a, well, vibrant red-light district. Beauty is everywhere, with thousands of 16th, 17th and 18th century buildings adorning Holland’s capital, their resident gargoyles akin to lovable sentries. And, as for culture, it’s wildly kaleidoscopic, seeping, as it does, into one’s very soul at seemingly every turn.

Home to an astonishing 51 museums, this haute hamlet of less than a million boasts 206 Van Gogh and 22 Rembrandt paintings, including the latter’s famed “Night Watch.” Even more impressive, perhaps, are the 16,000 concerts and theatrical performances on view annually, amounting to a staggering 40-some a day, in theaters ranging from the majestic Concertgebouw to the uber-modern Muziektheater. The Concertgebouw, built in 1888 in Neo-Renaissance style, drew season ticket holder Audrey Hepburn, who lived in Amsterdam after World War II, with the venue continuing to attract sophisticated patrons today, your peripatetic scribe included. And it’s not every concert hall where I can do a Sunday brunch of quiche, shrimp croquettes and Dutch pancakes before listening to Mariss Jansons conduct his celebrated Royal Concertgebouw Orchestra!

Between performances, I like to cruise the canals, getting a duck’s-eye view of the elegantly narrow houses with their hoisting hooks, as well as many of the 2500 houseboats lining the bustling waterways. And since I once owned a houseboat-aptly named the Victoria L—which was moored on the Prinsengracht and served as my base of European operations when I was a concertizing harpist, I hold a special place in my heart for this amazing city, one, I might add, that also has fabulous shopping.

Now armed with fewer Euros due to our sinking dollar, I can still be found strolling the heart of the western canal belt known as the Nine Streets. Not far from the Royal Palace in Dam Square, the area teems with art galleries, boutiques, gift shops and cafes, including the quintessential Browns. Neighborhood watering holes named for their interiors’ dark wood–made more so by years of tobacco smoke—the Browns are perfect for après-spending and knocking back a beer and some hapjes—light snacks of cheese, olives, nuts and bitterballen (fried balls of meat and potato).

But being a frites addict, I need my fix of Holland’s crispy, crunchy thick fries in a paper cone. Topped with gobs of high-calorie mayo and found on nearly every beautiful block (as is another Dutch staple, herring), frites are my idea of culinary heaven.

On the hotel front, Amsterdam boasts accommodations for all size wallets. When flush, I make a beeline for the splendid Grand Hotel Amrath. A stone’s throw from Central Station, this former shipping house from 1913 is considered the first fully constructed building in the Amsterdam School Style. Converted to a fabulous five-star hotel in 2007, the 165-room Amrath still retains the romance of the ocean, its deluxe interiors aglow with polished woods, gleaming marble and elegant statuary.

At Central Station, I hop a train for the 45-minute ride to Den Haag, where balletic history was made when Anna Pavlova died there in 1931. While on tour in Holland’s political capital, Pavlova contracted pneumonia and, clutching her “Dying Swan” tutu, she expired in her room at the elegant Hotel Des Indes. A plaque commemorates the Russian ballerina, where once she, too, might have enjoyed a lunch of goose-liver, pigeon breasts and sweetbreads in the sumptuous, chandelier-festooned dining room.

In addition to Den Haag being home to the World Court, it’s where the acclaimed Netherlands Dance Theater began a half-century ago. This year, the three-week biannual Holland Dance Festival celebrated the troupe’s first 50 years, with NDT’s artistic director/choreographer, Jiri Kylian, passing the torch to America’s own Jim Vincent. (For my Dance Magazine review of the festival, click here.)

I’m also wild about Den Haag’s small-town, yet urbane vibe, which is evident in the fabulous 20-room Paleis Hotel. Situated on the walking/shopping street, Molenstraat, the beautifully appointed lodge is owned and operated by Elizabeth L. le Clercq-van Raalthen, who staffs it with exceedingly helpful—and gorgeous—girls. The Dutch fashion awards were also in town, prompting a visit to the wonderful Gemeentemuseum for a preview of its “Voici Paris! Haute Couture” exhibition (opening February 20-June 6, 2010). I also popped into a variety of pop-up stores where the hippest designers were showcasing their coolest creations. 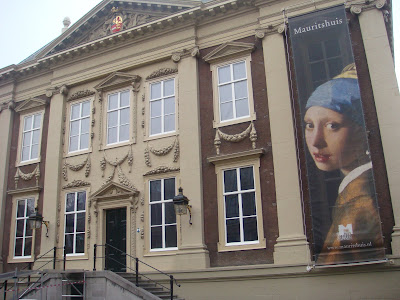 The Mauritshuis in Den Haag, home of Vermeer’s “Girl With a Pearl Earring.” Photo by Victoria Looseleaf.

Talk about cool: Den Haag’s Mauritshuis, a stately mansion housing a number of 17th century Dutch masterpieces, is home to Vermeer’s sublime “Girl With a Pearl Earring.” Gazing at the painting that’s inspired a book, a film and who knows what else, I learned that “The Girl” was not fashioned from one of Vermeer’s real-life models, but is, instead, a “tronie”—an imaginary head.

And since heads—or head shops—dot Amsterdam like so many daubs in a Seurat painting, I’m drawn back to the capital for a final infusion of coffee – and more art. Squeezing in return visits to the Reijksmuseum and the Van Gogh, I’m glad to be getting in gratis, thanks to my ‘I Amsterdam Card.’ A 24-, 48- or 72-hour card for travelers of all stripes, this is one of Europe’s best deals, providing discounts for restaurants, canal cruises, concerts and the like.

Alas, it’s time to bid adieu to Amsterdam. But I know it won’t be for long, as this is a city that never fails to delight, surprise and satisfy my Jones for living life large. 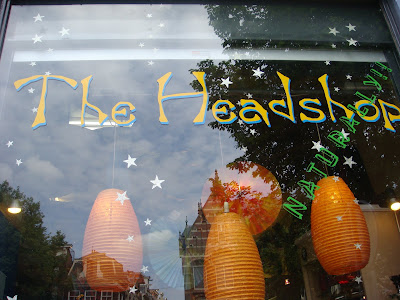 One of Amsterdam’s famed coffeshops. Photo by Victoria Looseleaf.