Dishing on Sex, Blood and Vampires with Alan Ball 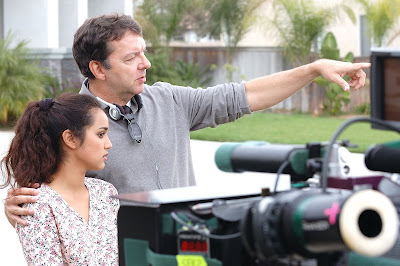 Director Alan Ball with Summer Bishil on the set of Towelhead.

Alan Ball’s plate is full. And so is his glass. Between taking generous sips of Orange Vitamin Water, Ball, the Academy-Award winning screenwriter of American Beauty who was nursing a cold, schmoozed with yours truly on a range of topics in a festive, feisty and far-reaching conversation at the Four Seasons in Beverly Hills. Ensconced in a suite to promote his big-screen directorial debut, Towelhead, his adaptation of Alicia Erian’s novel about a 13-year old Arab-American girl’s sexual awakening (starring newcomer Summer Bashil), as well as to dish on vampires, mortals and a lone telepathic waitress in his new HBO series, True Blood, Ball proved witty, uber-intelligent and – well – exceedingly open.

Indeed, though Ball discussed his decision to show a bloody tampon in all of its, er, glory, onscreen in Towelhead – the notoriously-titled movie that’s got people gabbing – your ink-stained wretch chose not to include this bit of menstrual patter in our interview. But check out what else Ball has to say – including bidding adieu to Six Feet Under, the HBO series that cemented Ball’s place in the pantheon of great television shows – in a series of interviews I did for KUSC-FM radio. Included are two Spotlight on the Arts (Translating the Story to Film and An Incendiary Title), as well as my Arts Alive, piece, a longer portrait of Ball, one of Hollywood’s truly original voices.