The Boys Are Slack 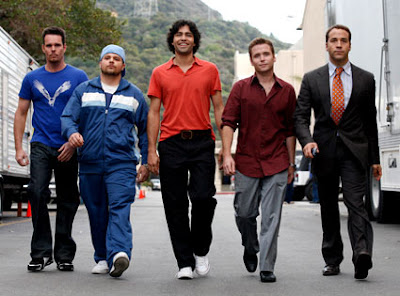 As I cannot justify to myself paying for both HBO and Showtime and I love Weeds, I’ve only recently switched back to HBO and begun watching Entourage again (since Weeds is over for now, though Entourage may have to go when Showtime’s Californication comes back on Sunday—yes, I realize you can rent these shows but then you have to WAIT). Here are a few observations on and puzzlements re The Boys after my hiatus:

1) Has Eric picked up Vince’s “whatever” attitude toward life and especially women (unless, with Vince, inexplicably, the woman is the bland Mandy Moore)? He seems to hook up, cancel dates, get mad without really getting mad, walk away, come back, and walk away again without ever getting flustered. (And why, by the way, are these gorgeous, complicated women so into E?) Suddenly, Turtle—who has a serious thing going on with Jamie-Lynn Sigler, playing herself (perhaps helped along by, in a case of life imitating art, the two actors becoming a couple)—is the one who seems mature. Turtle?

2) A mean-spiritedness still occasionally rears its ugly head on this show. Last season Drama made a reference, supposedly humorous, to what amounts to sexual abuse of a girlfriend during adolescence that I wasn’t sure I fully caught but didn’t want to think about too much. This season’s examples are less troubling but more obvious: the gang laughing about how Seth Rogen is “too ugly” to get the pretty girl (this went on for a while); one of Eric’s young lovelies asking, “Who’s the fossil?” of his 70ish female receptionist. (Eric did tell her not to be mean, but didn’t take the hint that perhaps this was a girl to be avoided.)

3) Most important, über-agent Ari may be the first shark to have jumped the shark. He used to be the best thing about the show, his rarely tamped-down rage and ambition providing the kinetic energy Vince’s crowd lacks. Now Jeremy Piven (is it the mercury poisoning?) has lost whatever elusive quality it was that made Ari’s Type Ultra-A personality funny, and without that his spewing, demanding, abrasive ways are only dark and grating—just ask Lloyd.