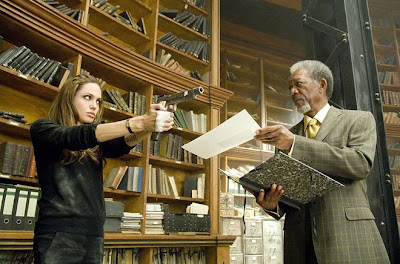 While much of the world awaits Angelina Jolie’s delivery of twins, here’s what I’ve been wondering: How does someone who, by all appearances, wants to save the planet one child at a time (and you’ve got to be very cynical not to commend that) decide to act in a movie like Wanted? I’m not talking about the critical value (O.K., there isn’t much) but rather the ethos of the film, which seems to say: Life is cheap. Right needs might. Nerds should pack heat (also knives and blunt instruments like computer keyboards). If you haven’t murdered someone today, you’re really lazy.

It’s not enough that director Timur Bekmambetov has a fetishistic thing for bullets, so that we have to watch them close up, in slo-mo, as they shatter glass, curve (care of the curvebullet shooter played by James McAvoy) around Jolie’s stunning face to merely tousle her hair—well, what would you do if you were that bullet?—and, mostly, tear through human heads with the attendant blood, sinew, and bone. (And the silver bullets are pretty, too, with carvings of various kinds. Objets d’art.) No, he wants to take cold-heartedness to a higher level, so that, for example, a simple bull’s-eye target for shooting practice won’t do; nor will grotesque pig carcasses. For this in-your-face flick, only real human bodies measure up—dead bodies, to be sure, but hung on meat hooks, huge iron hooks going right through them, one of them looking like your grandmother. I don’t know what to make of this. Are we to applaud the seriousness of the cabal—I mean, fraternity—of assassins (I see I’ve been avoiding getting into the absurd, incomplete, and derivative plot, which involves a monastery, an oracle loom, and suicide-bomber rats), who just want to be really good at what they do?

I had a hard enough time with Mr. & Mrs. Smith, in which, of course, Jolie starred with the future other half of Brangelina (O.K., maybe that one was fate) as spouses who, unbeknownst to each other at first, are assassins. Secret marital murderous thoughts notwithstanding, are we really supposed to delight in watching the Smiths try to hurt and kill each other? And then they come together against a common enemy at the end—isn’t it cute?—to create mayhem and your general blood-splattering, assault weapons blazing. (For some reason that I can’t remember—comic effect?—this last part takes place in a vacant home-improvement store.) The Times’ capsule TV-listing review called it “a goof and a drag.” Precisely, with the “drag” scale skimming the floor.

But Wanted, in which Jolie plays yet another foxy (oh funny, her name is Fox!) assassin (who is not only tattooed, natch, but branded), ventures quite a bit further in the offensiveness department, mainly with scenes involving the “training” of a new hit man (McAvoy). A lot of Wanted seems to revisit Fight Club. I say “seems to” because I avoided Fight Club (though by coincidence I have a coffee-cup bathrobe like the one Pitt—we’re still keeping it in the family—wears in the movie). I’ve got this peculiar aversion to people getting their faces smashed in; therefore, I had my eyes closed for about a quarter of Wanted. Indeed, the initiation shown in that film pretty much consists of torture—beatings, stabbings, etc. From what I’ve heard, the violence in Fight Club had an artistic point. (I realize this is also true of The Sopranos, but I always wondered about what that does to the audience—is it encouraging sadistic impulses, all of this violence as entertainment? Or at the least isn’t there something disconcerting about people having spaghetti parties for marathon watching of Tony & Co.’s craven acts?) But with Wanted (bad title, by the way), it seems to be the point.

I think we know that Jolie doesn’t need the money. Speaking of the Wanted role, she told Vanity Fair: “It’s about being physical and jumping and running and being violent, and instinctively I knew I needed to do that.” I guess for her it was just a goof. And that’s a drag.