A Day of Remembrance & Revelry

Posted on December 9, 2016 by Victoria Looseleaf 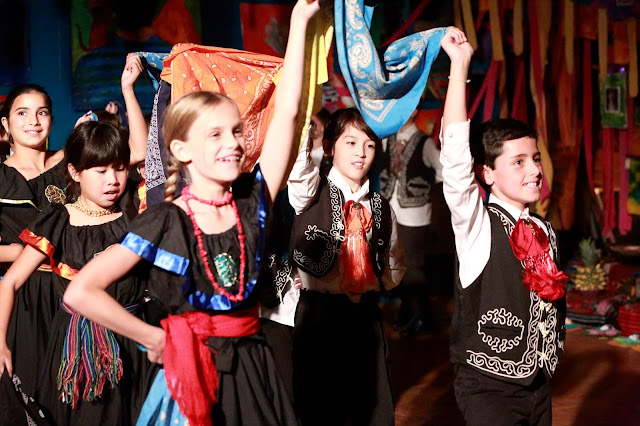 A giant bouquet of a celebration, one filled with music, dance, poetry and heartfelt joy, El Día de los Muertos Festival has been an annual tradition at Seven Arrows Elementary since the school’s founding in 1999 by Margarita Pagliai. With the lower school performance in the morning – kindergarteners, first and second graders (picture below) – and a pull-out-the-stops evening concert featuring third through sixth graders, as well as an array of teachers and proud singing and dancing parents, this traditional Latin American holiday is a unique blend of cultures that epitomizes the Seven Arrows’ philosophy. 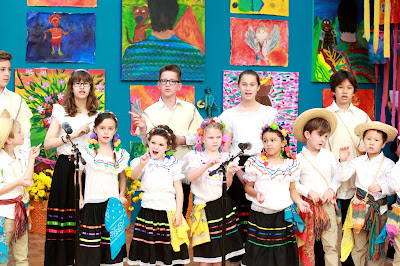 That credo is one that is deeply committed to exposing its students to the cultures and traditions of other countries through learning, participation and creation.

Explained Pagliai: “The reason for El Día de los Muertos is based from an anti-bias curriculum. We need to understand our roots and where we come from to be able to fly with our ideas. From a history point of view, it connects us to how the world is global. And this,” she added, “is a cornerstone of our education.”

Falling on November 2 (with Seven Arrows’ performances on November 4, 2016), this Día is one with deep spiritual connections to the souls who have passed away, as the living remember them in simple, yet profound ways, both honoring these lives, as well as acknowledging the fragility of life. 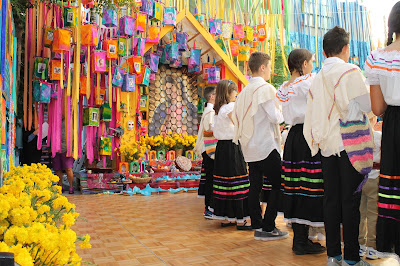 But it is far from somber, with the visual splendors rampant, adding to the festival’s allure: Celebrants are surrounded by grinning skulls, while the vibrant paintings, festooned baskets of marigolds and hanging kites (barilletes, thought to be messengers of peace), are nothing short of spectacular. The calaveritas (traditional Mexican sugar skulls), are also crowd-pleasers, and the many dozens of kaleidoscopically colorful costumes help give this celebration an extra dollop of dazzle. 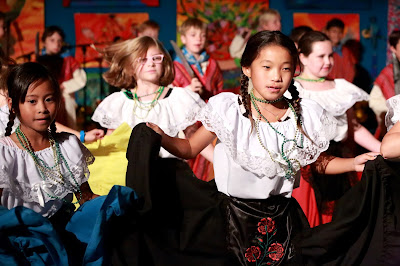 Elsa Chahin has been teaching Mexican dances at the school for this specific festival since 2005, when her son was in kindergarten. A former professional ballerina, the director of dance hails from Mexico, and has not only supplied the students with the gorgeous garb over the years, but has, through her teaching, instilled in her charges the importance and beauty of movement, at the same time piquing their interest and curiosity in other cultures.

“I bring the costumes from Mexico and they’re authentic from each region, as the steps are also authentic. Each state has a traditional costume and traditional music, and that also has different influences. Some have African, some have German and French, but most have Spanish ones.” 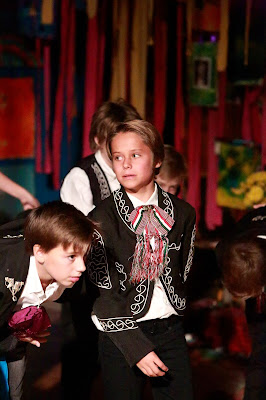 Pagliai pointed out that the brunt of these songs and dances are more than 200 years old and were handed down through the Spanish colonization around the world. “This celebration is also done in Central America and as far as the Philippines. [At Seven Arrows] there is a huge emphasis in learning about all of the countries in Latin America and their contributions.”

Pagliai added that the school, by having this annual celebration, “elevates the perception of what really the Latin culture is. We do it through the senses. Children understand and learn through the senses. As they wear the costumes, they see the textile and feel the geometry. When we teach traditions of other cultures, we teach the importance of family and connections with each other.

“Humans,” said Pagliai, “are social brains, and we need to connect.” 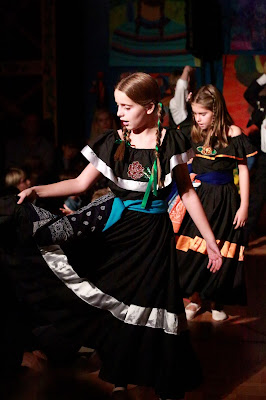 It is these connections that are very much in evidence during the performances. Mischa Posin opened both celebrations by playing Heitor Villa Lobos’ Constante on keyboards, with the evening celebration then featuring nine students performing the Salute to the Four Winds. Other highlights included an Offering to the Altar/Poems, with Stephan Moccio performing a piano improvisation and several students “communicating” with their ancestors with kites, the theme of this year’s festival.

Chahin explained that a committee of volunteers includes Clara Llano, who spearheads the making of the magnificent decorations, and a volunteer parent – architect Peter Fergin – who also helps build the supporting wooden structures, including the altar. 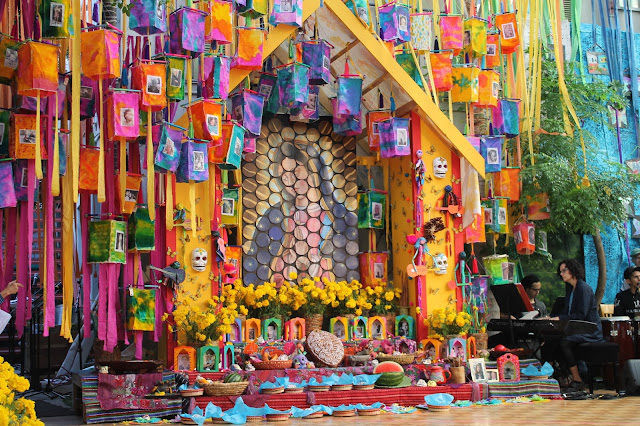 “The children create lanterns that hang around the altar, and they also bring photos of a loved one that has passed away and those decorate the candles. The idea is that our ancestors will come and visit that day to join in the celebration.

“Everything is very organized,” added Chahin, “and a week before the festival the committee starts creating the structures, and the day after they’re removed and not used again.” 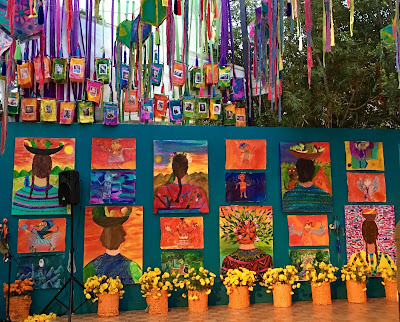 The profusion of explosively colored decorations is enhanced by student paintings, which were created in the school’s new north campus, across the street from Seven Arrows’ main facility, under the supervision of art teacher Clinton Bopps. The songs – rendered in Spanish – are the result of the combined efforts of Colin Simson’s music instruction and Beatriz Llano’s Spanish classes (photo by Victoria Looseleaf). 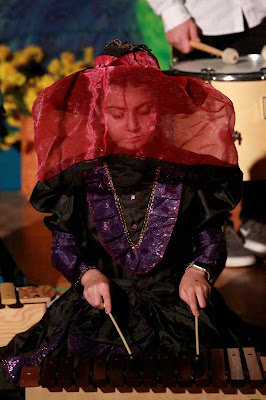 Andrés Ospina, Seven Arrows’ director of arts and environmental programs, explained that the festival “combines a solemn respect and an exuberant celebration for the lives of our ancestors. We believe,” he added, “that this is a much needed addition to the meaning of these children’s lives. Our dances, art projects, installations and music performances all deal with this in different sides of the spectrum, so that children feel, see and understand the whole meaning.”

The November night was balmy as the students sang and danced their hearts out, some shaking maracas, others sporting headdresses, long fringed dresses, fans, serapes and straw hats. There was, of course, the Jarabe Tapatío, the Mexican hat dance, as well as a number performed by fourth graders featuring capoeira, a Brazilian martial art form that combines elements of dance, acrobatics and music. 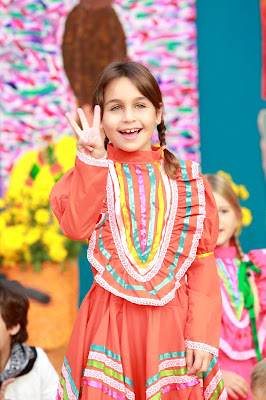 Several high points – among so many – were dances featuring mothers and sons (El Colás), and fathers and daughters (La Bruja), both for sixth grade students and their parents.

Chahin spoke about choreographing those beloved works: “In this culture we don’t have a lot of opportunities for children to dance with their parents. In Mexico, you have the quinceañera, so we decided to do a dance for the school’s 15th anniversary. It was originally for fathers and daughters that then evolved to have also the mothers with their sons. It’s very special for the parents, and many say that’s their favorite thing of the entire program.”

That this festival not only touches the heart, but is also a marvelous learning experience makes it truly exceptional.

Said Pagliai: “When we teach traditions of other cultures, we teach the importance of family. It’s also all about connecting with your soul and the acceptance of what you cannot control – death – and keeping those you loved spiritually inside you. Most of all, it is a way for children to learn stories about their ancestors.” 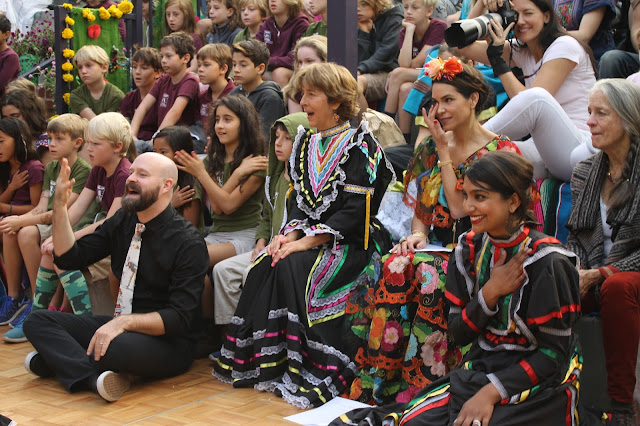 All photos, except Looseleaf’s, are by Ramona Trent and Tanya Barcessat.