Posted on January 2, 2017 by Victoria Looseleaf 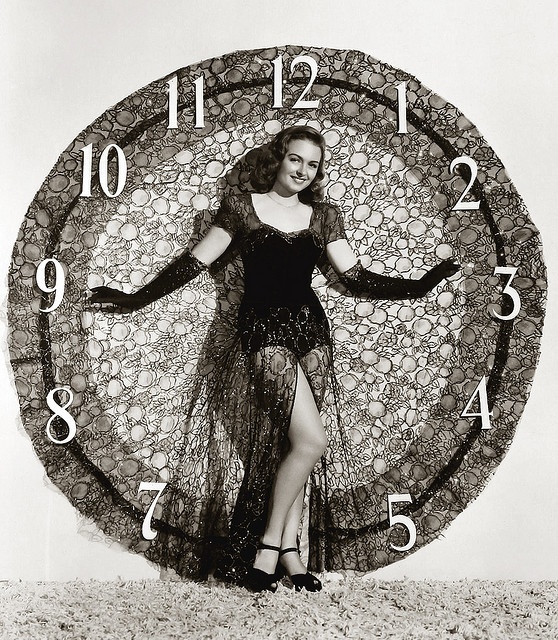 If it weren’t for the unfathomable results of the 2016 election – with the winner henceforth referred to as “he whose name shall not be spoken” – this year actually did have a number of marvelous and significant highs. But with the pall cast over the land – indeed, over most parts of the world – it is sometimes hard to be optimistic in the face of moral bankruptcy, divisiveness, greed, fascism, and, well, the list, unfortunately, goes on.

That is precisely why the arts are needed now more than ever. And it is the arts – dance, music, visual, literary, anything that feeds one’s soul – that gave 2016 a beautiful sheen and raison d’être. 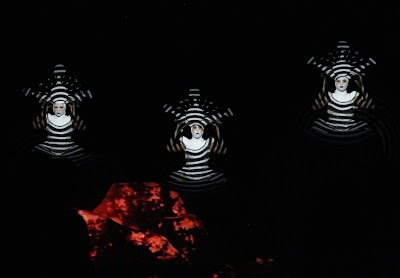 Here, then, is our list of the best the arts had to offer – in no particular order. For the lovers of Terpsichore, please click here for our Fjord Review. 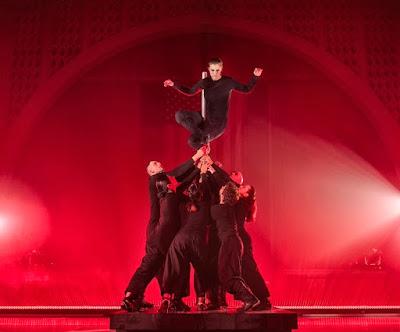 That said, though, we again applaud Jacques Heim and his troupe, DIAVOLO | Architecture in Motion™, on Ibuki, The Veterans Project, Phase One, and look forward to Phase 2 in the coming year (photo, right, George Simian). WIFE – Jasmine Albuquerque, Kristen Leahy and Nina McNeely – also blew us away, with its indelible imagery still bringing a measure of mental respite (photo above, Lou Becker).

One of our favorite spaces is REDCAT, where we spend so much time that it sometimes feels like our second home. Of the many memorable performances we saw there last year was Isabelle Schad’s nude solo, Der Bau (The Burrow). Choreographed by her and Laurent Goldring, the work featured the fearless German wrestling with fabric while also conjuring visceral tableaux as she deployed task-oriented moves as if possessed. 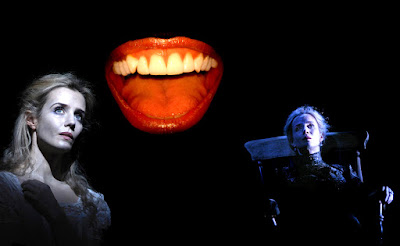 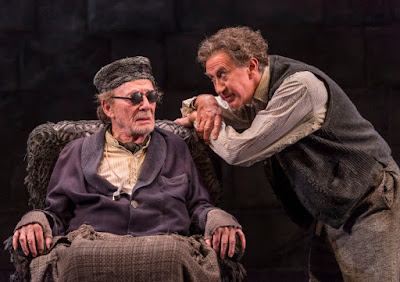 Beckett also didn’t get any better than Endgame, with Alan Mandell, Barry McGovern, James Greene and Charlotte Rae raising the roof off the Kirk Douglas Theatre in this Center Theatre Group production directed by a then 88-year old Mandell. 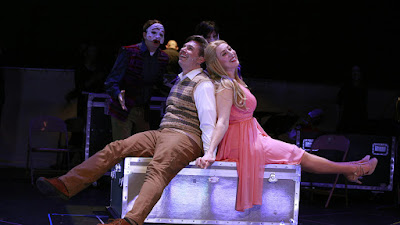 Good opera also abounded this year (click here for our KCET Artbound story on opera in unusual spaces), with Long Beach Opera presenting Leonard Bernstein’s Candide, helmed by one of our favorites, David Schweizer. The divine soprano Jamie Chamberlin assayed the glittery and gay heights of Cunegonde with ease, making us look forward to hearing – and seeing – more of this gifted singing actress in 2017, notably in LBO’s American premiere of The Perfect American. A fictionalized account of Walt Disney’s final days, the opera by Philip Glass features, among others, Chamberlin in the roles of Hazel George/Nurse, March 12 and 18 (photo above, with Todd Strange). 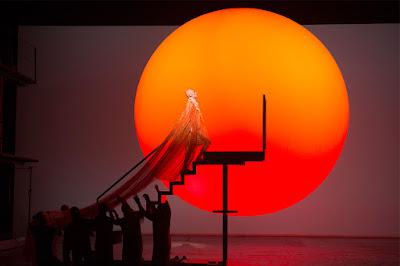 Being a major minimalist, we can never have too much Glass, and Los Angeles Opera’s production of his 1984 work, Akhnaten, was an aural and visual spectacle. Another performance that was spiritually redeeming was the Los Angeles Philharmonic’s rendering of Arvo Pärt’s Miserere (the Estonian composer is the world’s reigning holy minimalist), which was paired with Mozart’s mournful Requiem. Conducted by Gustavo Dudamel, the program was the first of the Phil’s Mozart & Pärt Festival

And speaking of the Dude, he conducted a revelatory staging of Bernstein’s iconic West Side Story at the Hollywood Bowl last summer, still our favorite City of Angels’ outdoor venue. 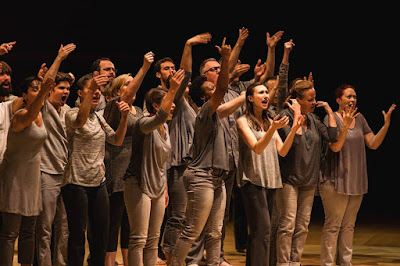 Needless to say, we took spirituality wherever we could find it, and we struck gold with the Los Angeles Master Chorale’s presentation of Lagrime di San Pietro (Tears of St. Peter). Talk about being high on the redemptive scale! The 21-madrigal cycle composed by Orlando di Lasso in 1594, was led by the always stellar Grant Gershon. The premiere featured 21 singers in a passionate staging by the brilliant Peter Sellars (click here for our KCET Artbound interview with Sellars).

And we could never let a year go by without seeing the fabulous John Fleck, who, along with six other actors, including Shannon Holt and Annabelle Gurwitch, made David Greenspan’s Go Back To Where You Are worthwhile. Directed by Bart DeLorenzo, the play ran through July and August at the Odyssey Theatre. 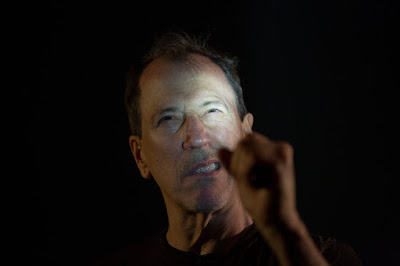 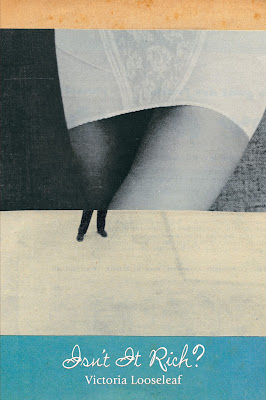 Then there was the dramatized staging of our book, Isn’t It Rich? After giving several readings around town in various series, including Library Girl, Whisky and Poetry, Tongue and Groove, A.G. Geiger and Beyond Baroque – shout-outs to Susan Hayden, Kim Ohanneson, Conrad Romo, Michael Delgado and Richard Modiano, respectively – we were over the moon with two semi-staged performances at Diavolo Studio in mid-October. (cover art, Katrien De Blauwer) 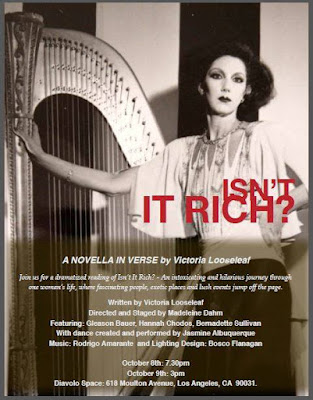 Beautifully directed by Madeleine Dahm and featuring actors Hannah Chodos, Gleason Bauer and Bernadette Sullivan, as well as dance by Jasmine Albuquerque and set to the music of Rodrigo Amarante, our book came alive in ways we could never have imagined.

We look forward to a full-fledged theatrical run this year at one of L.A.’s venues, so please stay tuned. In a nutshell, Isn’t It Rich? is the 21st century’s Vagina Monologues – minus the politics but not the sex. 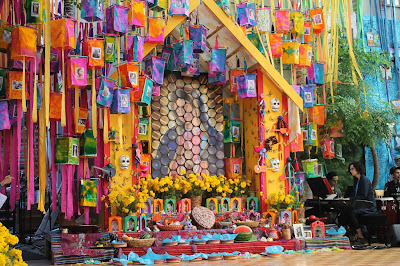 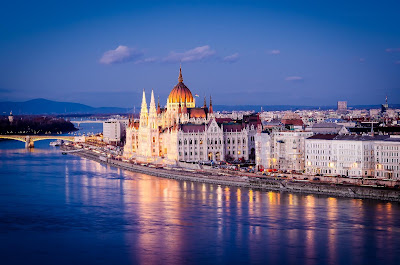 We also would like to mention that in 2016 we became a Pikler® chronicler, editing a book and several articles based on the infant and toddler care methods of the late pediatrician Emmi Pikler of Budapest, Hungary. This project is ongoing and is being done with Pikler/Lóczy USA president, Chahin and Anna Tardos, Pikler’s daughter. 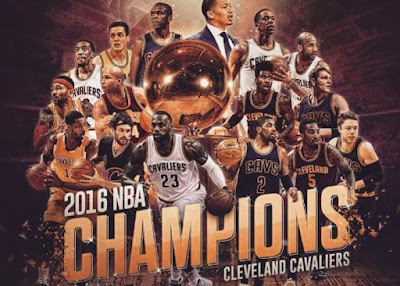 We would be remiss if we didn’t mention our very own basketball stars, the Cleveland Cavaliers, who took home their first championship in 52 years. It was also cool to see Beyoncé and Jay-Z at one of the games, because we love Queen Bey, especially her genius work, Formation from the equally staggering Lemonade. We were feeling great about the World Series, as well, which went seven games, but we didn’t begrudge the Cubs their win against our hometown Cleveland Indians, figuring we would have a lot to celebrate on November 9.

But how wrong we were, which brings us to the close of a year that was filled, sadly, with many deaths. Included were music megastars – Prince, David Bowie, Leonard Cohen, Maurice White – as well as classical musicians Pierre Boulez and Nikolaus Harnoncourt. Then there was a host of beloved actors, from Gene Wilder, Garry Shandling, Gary Marshall and Alan Rickman to Zsa Zsa Gabor and Carrie Fisher and Debbie Reynolds (click here for our remembrance of the mother/daughter icons who died within one day of each other).

We also mourn the passing of humanitarian Elie Wiesel, playwright Edward Albee, architect Zaha Hadid and activist Tom Hayden, as well as the one and only Muhammad Ali. It was a jolt, too, when theater impresario Gordon Davidson died in early October, having just chatted with him and his beautiful wife Judi at the Ahmanson Theatre. It was there that we attended opening night of the Tony award-winning play, A View From the Bridge, by Arthur Miller. Directed by Ivo van Hove, this was a production that also fascinated. 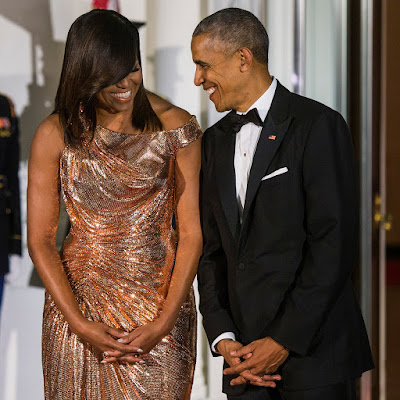 Possibly our saddest goodbye, though, will be to Michelle and Barack Obama, who were beacons of democracy – and more – in the last eight years. Who knows when we might see their like again…

But what we do know is that we’ll make the most of a new year. To paraphrase Lady MacBeth, “Out damned 2016, out”…as we say hello to the beginning of a beautiful 2017, one filled with love, peace, joy, health, hope, prosperity and art. Oh, yeah, and lots of champagne. 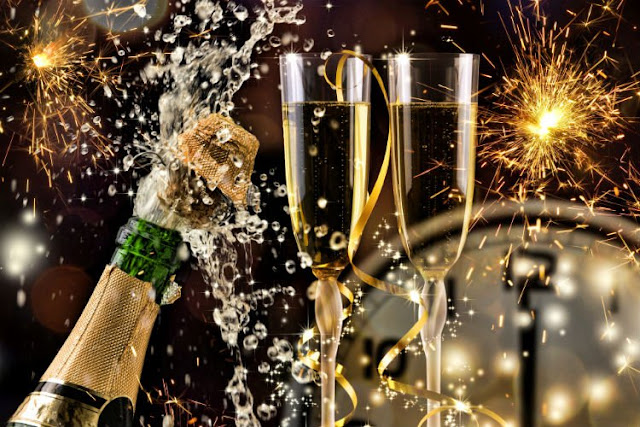