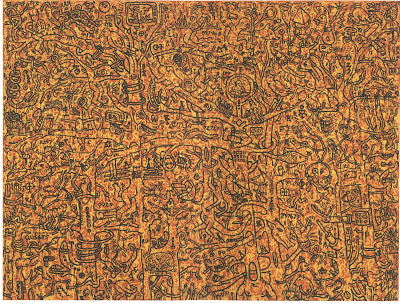 Above: Keith Haring’s “The Last Rainforest” © The Estate of Keith Haring. Below: Director Christina Clausen at Soho House. 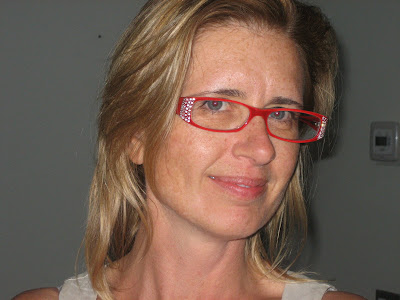 The Universe of Keith Haring
Directed by Christina Clausen
90 minutes
From Italy, France

Last Saturday evening, I attended a screening of Christina Clausen’s film The Universe of Keith Haring at the Soho House in NYC’s Meatpacking District, along with fellow bloggers Robert Rosen and Julio Malone, who’d met Clausen at a recent Tribeca Film Festival event. (The movie premiered at the festival on April 30.)

I had happened to overhear about a week ago, right before a T.F.F. screening of Squeezebox!, the novelist Jay McInerney talking about the ubiquity of Haring’s work in New York in the 80s, how you could hardly walk out of your building without seeing some freshly painted Haring figures on a wall, on somebody’s jacket, on a subway platform. I remember that too, especially, for some reason, his Christmas-greeting Madonna (the Jewish one, though Haring was friends with the other) and Child. I recall walking into the Christopher Street subway station and suddenly coming upon the deceptively simple curving lines that suggested a veil, a woman’s face, and the baby she was holding, all surrounded by Haring’s signature little lines, a bit like rays but more about kinetic energy—nearly every one of his creations, no matter how bizarre, seemed to be jumping for joy.

And there’s a lot of joy in Clausen’s film. Many people loved the wiry, bespectacled Haring, including his supportive family—he had grown up in the Norman Rockwell-esque Kutztown, Pennsylvania, but came into his own in New York—and close friends such as DJ Junior Vasquez and fellow artists Kenny Scharf and Yoko Ono. Haring was very much of his time, diving into the early-80s swirling underground scene of sex (the Baths), clubs (Paradise Garage and Club 57), and rock ’n’ roll (the B-52s). Through interviews, film footage—when Haring spray-paints a mural on a wall in record time, you can almost see those kinetic lines shooting out from his own body—and narration by Haring himself (courtesy of his biographer, John Gruen), Clausen does indeed capture his universe, even as it changed with the advent of AIDS. AIDS, of course, claimed Haring in 1990; he would have been 50 on May 4.

Over champagne at the cocktail reception that followed the screening, in a little bar area next to the theater, Clausen confided to a few of us her concern that the reaction to the screening seemed “cold.” But we assured her that instead the audience appeared to be stunned by Haring’s death (Scharf nearly breaks down when speaking of it)—no matter that we knew the fact of it—after getting to know him in this way. I asked Clausen, who is Danish but lives in Rome, if she’d ever met Haring. She said she hadn’t thought so when she decided to do the film, but while going through photographs for it she realized that as a high-school student she had once seen him. At a Copenhagen museum, where he’d come to do a mural, she locked eyes with him, in a way that she now feels was meaningful.

Who knows if that encounter planted the seed for Clausen’s film? I’m just glad to have had the opportunity to wander into Keith Haring’s poly-wondrous universe, even though I feel I’ve been there before.