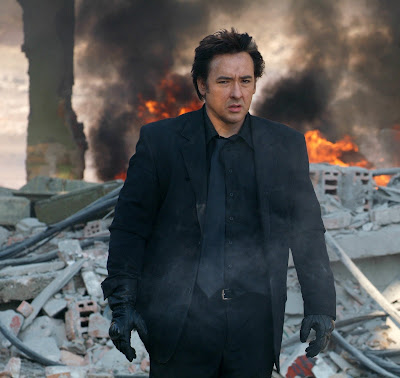 Hauser (John Cusack) walks through the troubled land of Turaqistan.

I wouldn’t say that War, Inc. is the best political satire since Dr. Strangelove—it’s too ragged and meandering for that. But in the same way that the Kubrick classic was able to provoke laughter at the notion of nuclear annihilation in the grim aftermath of the Kennedy assassination (and with the Cuban missile crisis still fresh in everybody’s mind), War, Inc. performs a miracle of its own: It fires off a barrage of one-liners and sight gags about prosthetic limbs, torture devices, and beheading videos that demonstrate the much overlooked comic potential of the endless War on Terror and the cabal of criminals who’ve transformed the United States of America into an outlaw nation.

Set in the Green Zone of a country called Turaqistan, in the very near future, War, Inc. shows us what the world might be like if the entire US government and military were completely under the control of multinational corporations.

Hauser (John Cusack) is a charming CIA hit man who settles his troubled conscience with straight shots of hallucinogenic hot sauce as he goes about the business of trying to assassinate a Middle Eastern oil minister (Lubomir Neikov) in town for a Brand USA trade show. Natalie Hegalhuzen (Marisa Tomei) is a lefty freelance journalist on assignment for The Atlantic, determined to write an honest appraisal of the situation in Turaqistan. Marsha Dillon (Joan Cusack) is a foul-mouthed government operative who functions as Hauser’s office assistant. Yonica Babyyeah (Hilary Duff) is a Britney Spears-like pop singer slated to perform at the trade show and to marry one of the dancers in her posse. The former vice president (Dan Aykroyd) is a corporate CEO who likes to teleconference while moving his bowels. And Walken (Ben Kingsley) is Hauser’s Strangelovian CIA boss.

There’s a lot going on in this movie—often subtly, in the background. You’ve really got to pay attention. But is it entertaining? That all depends on how funny you find the notion of a chorus line of Turaqistani amputees dancing at a trade show to demonstrate the latest in prosthetic-limb technology.

I didn’t think I could laugh at such a thing. But I did.