Posted on November 23, 2011 by Victoria Looseleaf 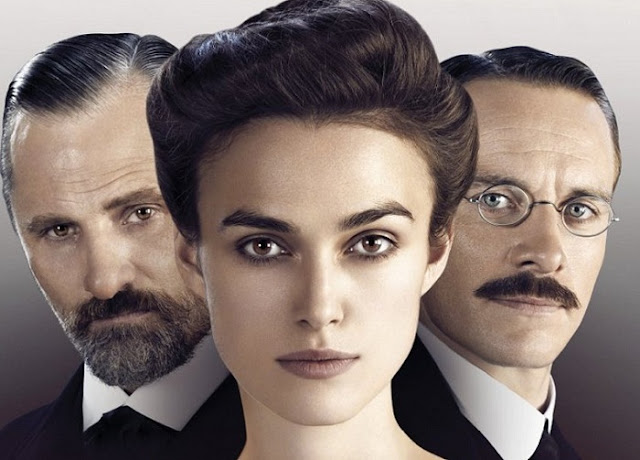 Whatever his method – indeed, methods – we love David Cronenberg. At least as a filmmaker, since his foray into opera with 2008’s The Fly (LA Opera), was a swat-worthy misfire. His latest flick, A Dangerous Method (bad title, but whaddya gonna do), is based on a true story about Carl Jung (an Oscar-worthy performance by the eminent Michael Fassbender), a psychiatrist who takes on the case of an unbalanced, 18-year old Russian hysteric, Sabina Spielrein (a courageous Keira Knightley). Jung’s treatment is derived from his master, none other than the father of shrinkdom, Sigmund Freud (Viggo Mortensen, in a surprising performance that is sardonic, astute and cigar-chomping).

Depicting a series of occurrences from 1907 to the eve of World War I, the film, written by Oscar-winner Christopher Hampton (Dangerous Liaisons), is based on his play, The Talking Cure, which actually stems from John Kerr’s book, A Most Dangerous Method. (Whew…) Chronicling the, er, maleable relationships of this doctor-patient triangle and sumptuously shot by Peter Suschitzky in Cologne and Vienna (the latter standing in for Zürich, a town we visited last summer – click here for our coverage of the Swiss burg), Method almost makes madness look enticing – or at least the after-effects of said condition, especially as portrayed by the anorexically gorgeous Knightley. 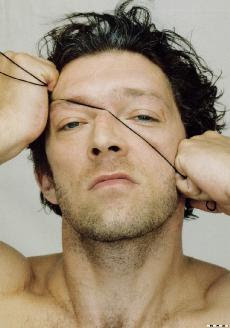 Enter analyst Otto Gross (the eternally intriguing Vincent Cassel, so good at being bad, even in Black Swan – click here for some of our BS coverage), who is sent to Jung by Freud to stir things up, id-wise. And since Otto is nothing if not pure id, sex rears its slithery head, causing ripples in Jung’s pristine marriage to the aristocratic Emma (Sarah Gadon). If it all sounds too Freudian, well, that’s because it is…hellooo! 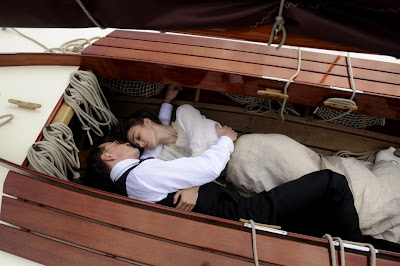 Will Jung bed Sabina…in a boat? On the floor? Will Freud? What about the Oedipal thing between the two doctors? And what about Sabina and Freud being Jewish to Jung’s steely Protestant? Does sex hurt or help? Will Sabina become a therapist in her own right? Who’s snorting coke? Do we care? And how is Howard Shore’s music? (Hint: Here it works just fine.) 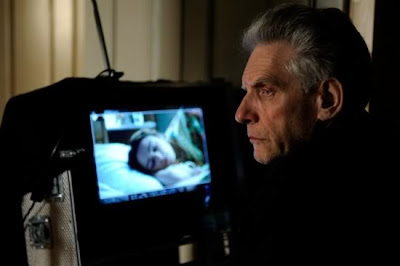 When these questions are tackled by someone of Cronenberg’s stature (we loved Dead Ringers, Naked Lunch, Eastern Promises, and the list goes on), we can’t help but care. Add Denise Cronenberg’s glorious period costumes to enhance the proceedings, and A Dangerous Method is an elegant and intellectual ride, intriguingly shot through with flashes of Cronenbergian dread. This head-trip of a film may be an acquired taste, but it’s one we’ll be savoring again. 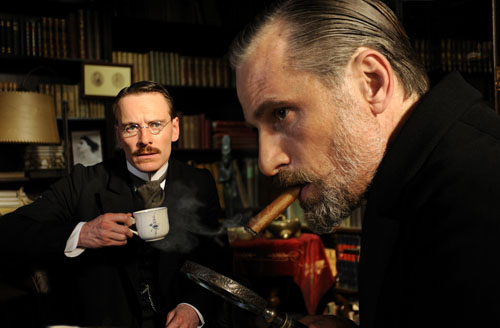 From left: Michael Fassbender as Carl Jung and Viggo Mortensen as the fatherly Sigmund Freud.