Barack in a Bottle 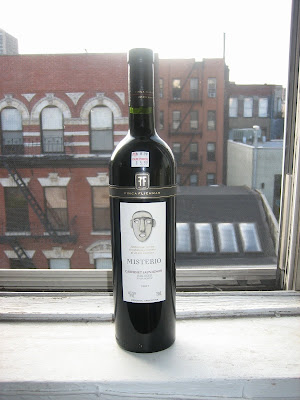 Hey, it’s summer. So let’s take a little wine break—and how about some politics with that Cab?

Remember Obama’s reaction to a hieroglyph in an Egyptian pyramid a few weeks ago—“That looks like me! Look at those ears!” (See video below.) We could almost hear him saying the same thing at NYC’s Warehouse Wines & Spirits recently when we spied the mask-like symbol of “silent wisdom” on the label of an Argentinean Cabernet Sauvignon. (Click photo to see it close up.) The wine, called Misterio, sounds a bit like Obama himself in the description on the back: “friendly … easy but sophisticated, full of mystery”—or maybe mystique? A strange slogan, however, also on the back, could be a bit discouraging for someone with such an ambitious agenda: “Working in silence … for years.” (Note to Barack: Ever consider ear piercings? Note to readers: It’s not bad, with a punt taller than you’d expect for $5.99 [at WW&S]! Note to selves: Send case to White House!)