Posted on February 10, 2012 by Victoria Looseleaf He was the tortured artist in every sense: misunderstood, broke (he was supported by his brother), and afflicted with what was then diagnosed as non-convulsive epilepsy – invisible fits believed to occur in the brain. He was, of course, Vincent Van Gogh, Dutch artist extraordinaire. And though he was unrecognized in his short lifetime (he died at age 37 in 1890), his works have yielded numerous masterpieces that have gone on to command record prices. 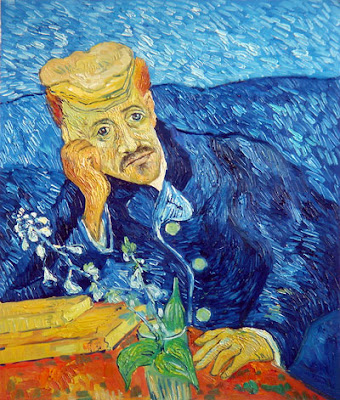 In 1990, the artist’s melancholy character study, Portrait of Dr. Gachet (right), was sold for $82.5 million, then the highest auction price ever paid for a work of art. That sum seems almost a pittance, though, compared to what went on last year when Paul Cézanne’s The Card Players sold for more than $250 million.

But way before the art market exploded, there was the incredible journey of the tormented Dutchman that ended in suicide. Or did it? In their beautifully written new biography, Van Gogh: The Life (Random House), authors Steven Naifeh and Gregory White Smith provide an astonishingly detailed tour through the artist’s personal, professional and sociological universe, concluding with their theory of Van Gogh’s death. Indeed, the tome is north of 900 pages and is so epic it required more than 5,000 typewritten pages of footnotes, conveniently located on the online site, Vangoghbiography.com.

The authors, in no rush to complete their saga, took a decade to write it (as they did with their previous book, Jackson Pollock: An American Saga, which won a Puliltzer Prize in 1991 and then went on to become an Academy Award winning film starring Ed Harris and Marcia Gay Harden; click here for our interview with Harden for her Tony-winning turn in God of Carnage). 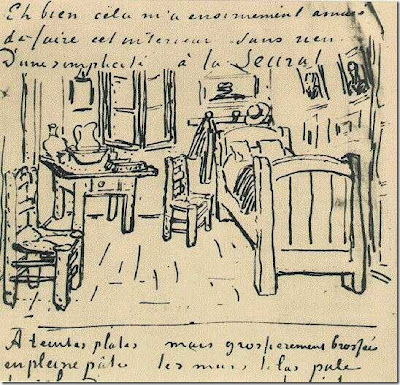 No slouches in the research department, the authors drew heavily on archival material from Amsterdam’s Van Gogh Museum, as well as culling from a new, six-volume edition of Van Gogh’s letters, (about 900 freshly translated, annotated epistles), itself 15 years in the making and published in 2009. Thus were the authors able to convincingly portraying the complete Van Gogh: from his inner life and drinking bouts – which were legion – to his manic ups and downs, ultimately diagnosed during the artist’s final stay at the hospital in Arles by 23-year old intern, ­Dr. Félix Rey. Naifeh and Smith also chronicle the painter’s creative process and the complex relationship he had with his adored brother Theo. 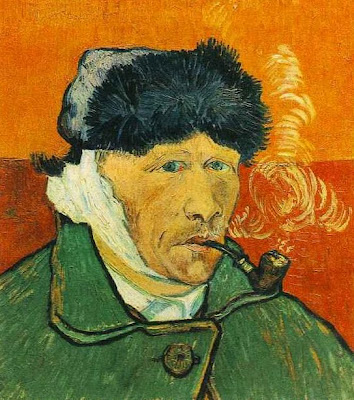 So, we’re just sayin’: This book should be required reading for anyone heeding an artistic calling (and for those who simply crave great bios), as the authors somehow seem to put us inside the head of Vincent Van Gogh, which, is not always, well, a pretty picture. (Lopping off his own ear is decidedly not pretty, but a documented fact, with the artist himself having depicted the ravaged results in a self-portrait, one in which what’s left of the organ is swathed in bandages, right.)

As to WWVD – what would Vincent have done, were he mentally afflicted in the 21st century – this subject is not addressed. But we believe that had he endured, say, electroshock therapy, or been prescribed a heavy pill-taking regimen, his paintings would have been bereft of violent colors, his brush strokes less brash, his subject matter more impressionistically rendered, that is to say, his art would have been more typical of the era: watery, pointillistic, perfumed. And don’t get us wrong: We have much affection for the ever soigné Renoir, a lily-loving Monet and the Tahitian-bent Paul Gauguin (seen below as portrayed by Anthony Quinn to Kirk Douglas’ Van Gogh in Lust for Life), whose stormy relationship with the artist is also scrupulously documented in the book, it’s just that their stories aren’t stormy or tragic. 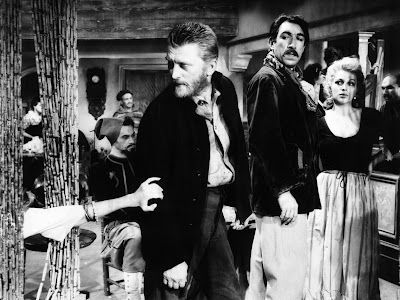 While there have been numerous Van Gogh biographies – not to mention Robert Altman’s brilliant 1990 flick, Vincent and Theo, and the above-mentioned Lust for Life, Vincente Minnelli’s 1956 mawkish melodrama, with Kirk Douglas not up to thespian snuff as Vinnie, his New York accent so far gone it needs a GPS – Smith and Naifeh propose a new theory on the artist’s death, which, to date has been attributed to a self-inflicted gunshot wound to his stomach.

Not so, say the authors whose alternate theory took root from rumors first heard by art historian John Rewald in the 1930s during a visit to Auvers, the small French town where Van Gogh died. The bullet, the authors posit, was actually fired elsewhere in town by the bullying teen, Rene Secretan, who, with his friends, used to harass the eccentric painter. The authors suggest that some kind of encounter took place between Vincent and the boys on the day of the shooting. “Once the gun in Rene’s rucksack was produced,” they write, “anything could have happened — intentional or accidental — between a reckless teenager with fantasies of the Wild West, an inebriated artist who knew nothing about guns, and an antiquated pistol with a tendency to malfunction.”

Aha! This seems plausible to us, although the Van Gogh Museum says it does not accept the murder theory. Still: We loved this book and relished reading it, not only because we’ve been Van Gogh fans forever and have also been to many of the locations in the book (read our reportage on Den Hague, Amsterdam and the unpronounceable beach town, Scheveningen), but because it is exquisitely written, hugely authoritative and luminously layered, completely capturing the alchemy between art and life. 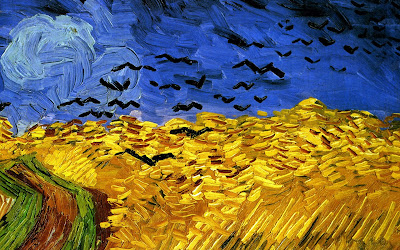 Oh, yes: The images are spectacular, too, with Van Gogh’s output prodigious (more than 900 paintings and 1,000+ drawings). From his earliest sketches and letters to his most famous works – Sunflowers, Irises, Starry Night and Wheat Field with Crows – all accompanied by descriptions as to how they were executed, the life of an unassailably authentic artist is revealed. 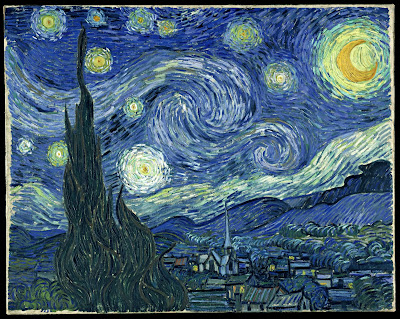 As Naifeh and Smith write: In the end, only art consoled. “My aim in life is to make pictures and drawings, as many and as well as I can,’ he wrote; ‘then, at the end of my life, I hope to pass away, looking back with love and tender regret, and thinking, ‘Oh, the pictures I might have made!’” 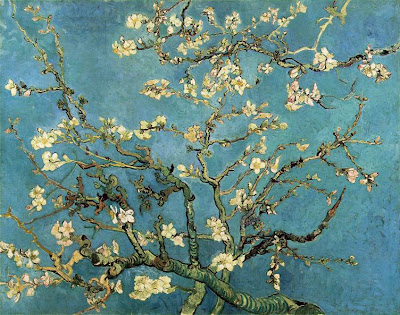 Finally: For those going to the East Coast any time between now and May 6, the Philadelphia Museum of Art has a fabulous exhibition, Van Gogh Up Close, which examines the artist’s relationship to nature and focuses on his years in France (1886-1890). To quote the New York Times, “the natural landscape inspired some of his most implacably innovative paintings, roiled of surface, ablaze with color and steeped in feeling. They are blunt, irresistible instruments for seeing.” 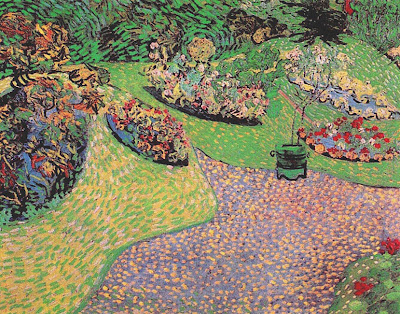 The show of 45 paintings,  organized by Philadelphia curators Joseph J. Rishel and Jennifer A. Thomson, who worked with art historian/ National Gallery of Canada curator, Anabelle Kienle, is a must-see for the serious Van Gogh devotee. Among the works are the exquisite, Almond Blossom, from 1890 (above), as well as the stunning Garden in Auvers (left, also from around 1890). The latter painting is making its first foray to the States, at least as far as anyone remembers. Make sure, too, that you purchase a copy of the Musuem’s sumptuous catalogue. The informative text and handsome photos will help deepen your Van Gogh experience, one blade of grass, one iris, and one tree trunk at a time.