Posted on July 8, 2011 by Victoria Looseleaf 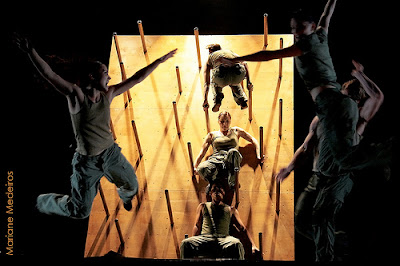 It’s no secret that Diavolo, founded in 1992 by French-born Jacques Heim (his grandfather, also named Jacques Heim, was a couturier who co-invented the bikini and dressed Edith Piaf, among other notables), is Los Angeles’ most popular dance troupe. Popular in the sense that this is the troupe’s 12th year of international touring and that when the company does perform on its home turf (which is rare), audiences go wild. 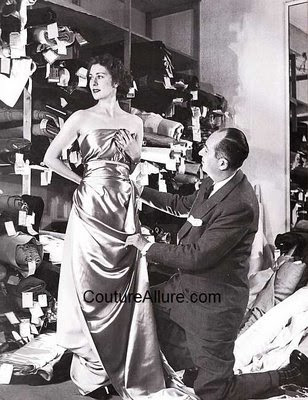 Couturier Jacques Heim draping one of his evening gowns on a model.

This was in evidence at the Watercourt at California Plaza as part of Grand Performances’ annual summer concerts. (Kudos, too, to Michael Alexander and crew on GP’s 25th anniversary!) On an evening shared with Columbian-based Noruz, Diavolo offered a mixed bill of five oldies (two recreated this year, one in 2009), and a glimpse of a new work, Cubicle, whose set could have come from The Container Store (this is a good thing…).

Heim, enamored with geometric shapes and structures and their infinite possibilities, will be expanding this 4-cube work to nine cubes, but for now, the enticing piece proved a wonderful commentary on the workplace, being boxed into spaces (literally, with performers squeezing their gorgeous bodies into small squares), and the need to trust. But trust is in the DNA of 13-member Diavolo, as these flying, whirling, acrobatic dancers must rely on one another to partner, catch (oh, those death-defying swan dives) and play off of each other in neo-clown mode. 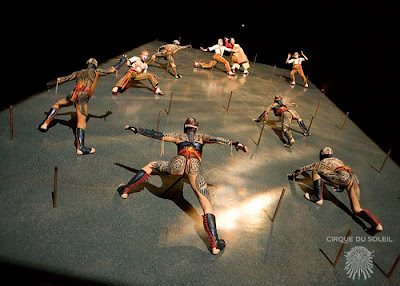 Two who clowned around were Garrett Wolf and Jones Welsh in Apex, a romp, in and out of the water that characterizes this urban performance space in downtown Los Angeles. Monkeying around with ladders, the duo, jostling with each other and the climbing devices, is reminiscent of erstwhile Cirque du Soleil jester David Shiner and his antics. But of course Heim is no stranger to Cirque, having choreographed the billion-dollar company’s most artistically creative show, KA, the permanent Vegas production helmed by Robert Lepage at the MGM Grand. (Naturally, I did write about Heim and Ka for Dance Magazine in 2005, but in order to read that article now, one has to pony up a few bucks to Amazon, of which I get nada, nil, not a cent, so…grr…) 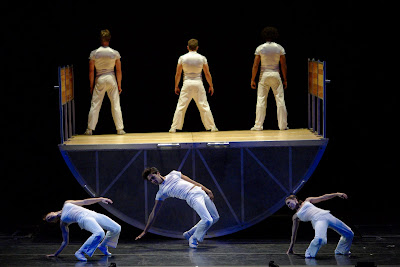 Diavolo dancers with the rocking structure of Trajectoire

But I digress: As this concert was a “tasting menu” of small Diavolo works – sans huge structures such as the boat of Trajectoire or the massive cubes and pyramids from Foreign Bodies and Fearful Symmetries (click here to read my Los Angeles Times “diary” from 2007, the troupe’s first appearance with the Los Angeles Philharmonic at the Bowl, and click here for my New York Times story on the second work of the trilogy, performed to John Adams’ music, from 2010), set pieces were minimal. In Origin, Jennifer Huffman did a fearless solo on top of, around and under a sleek sculpture of a nude woman, while Bench, from 2009 allowed seven dancers to frolic with and manipulate a small, yes, bench, to the music of Bach. 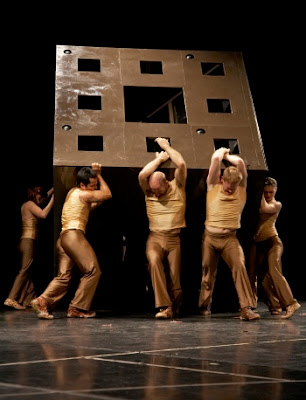 Talk about the world on your shoulders: Foreign Bodies

Bookending Diavolo’s concert were über-athletic performances of Cage (1995), which featured the troupe wrestling with a jungle gym-type prop and AWOL, a 1992 work revisited by Heim two years ago. And not to worry: If you missed the Grand Performances appearances (the troupe is also there July 8), here’s great news. Angelenos will have another chance to see Diavolo in October, when they will be in residency at the Los Angeles Music Center for the creation of a new piece inspired by the movement of skateboarding. Then, on February 2, 2012, Diavolo will debut at the spectacular new Valley Performing Arts Center. For the iconoclastic troupe once described as “the dance bridge to the 21st century” (by yours truly, actually, in the L.A. Times; click here for my1996 review), Diavolo has proven to be an even mightier force in the new millennium.