Diavolo Does It Again

Posted on February 2, 2012 by Victoria Looseleaf 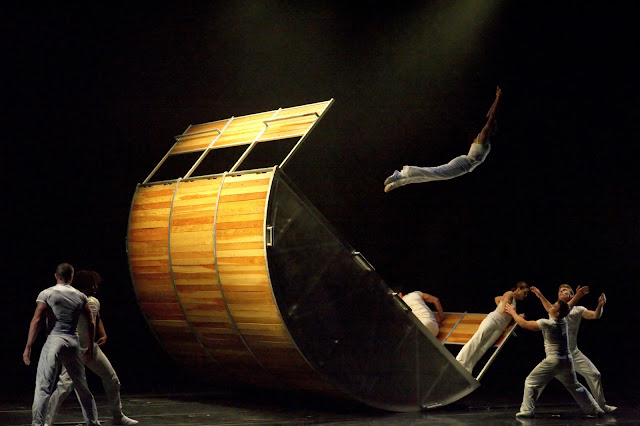 …and this time in its home town. It’s been too long since Diavolo, one of Los Angeles’ premiere dance troupes, performed in Southern California. Founded in 1992 by artistic director Jacques Heim, the company did strut some of its signature hyper-physical stuff last July at the Watercourt at California Plaza as part of Grand Performances’ annual summer concerts. But the troupe shared a bill and its offerings were more akin to a tasting menu. (Click here to read about that program, which also has beaucoup de links to Diavolo’s history and our myriad writings about the company.) 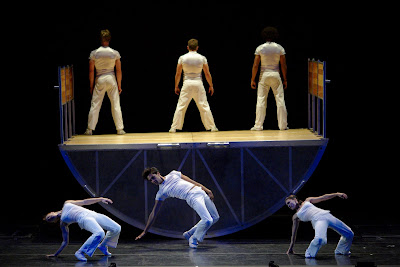 Wait no more, Angelenos: Tonight the troupe takes to the stage of the new Valley Performing Arts Center in Northridge (we haven’t been there yet and have only heard good things, its 405-adjacent location aside); and on March 22, Diavolo heads to Irvine and the Barclay Theatre as part of its 17-city, four month tour. 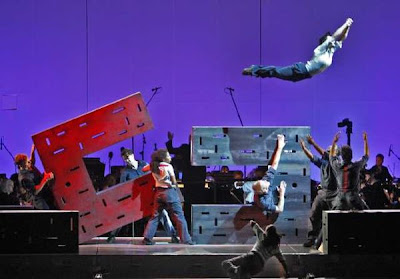 On the programs are two favorite works: the rollicking boat number, Trajectoire (above) and Fearful Symmetries (left). Reviewing the 1999 premiere of the former for the L.A. Times, we wrote that it was “more Dramamine than drama.” As Heim is constantly tweaking, revising and editing, Trajectoire has since been elevated to classic status. So, too, has Fearful Symmetries. Since its 2010 premiere at the Hollywood Bowl, with Bramwell Tovey conducting the Los Angeles Philharmonic in the music of John Adams (click here for our New York Times story), this jaw-droppingly stunning work has proven enormously popular.

We admit it: Just as we’re addicted to Downton Abbey (click here for our musings on our TV DOC – drug of choice), we’re hooked on Diavolo, albeit we have been for a lot longer. Indeed, happy 20-year anniversary, Diavolo. We look forward to next year when you return to the Hollywood Bowl with the final installment of your collaboration/trilogy with the L.A. Philharmonic, “Fluid Infinities,” set to the music of Philip Glass. (Click here for some of our recent Phil coverage, cuz we’re crazy about Gustavo Dudamel, aka, The Dude, who’s appearing on Sesame Street February 6.)

And for more about Diavolo’s fiendishly busy touring sked, click here to read our current Dance Magazine news story on these fearless artists who continue pushing the boundaries of dance, dreams and death-defying moves.