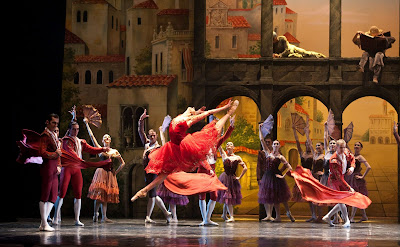 It’s bad enough having to schlep to Orange County from The Leaf’s City of Angels’ digs, but getting stuck in a construction zone on the way back is murderous. Which isn’t why I was all riled up about Eifman Ballet of St. Petersburg’s frenzied production of Don Quixote, or Fantasies of the Madman, choreographed by Boris Eifman in 1994 and revised last year. (How’s that for a run-on sentence?) Actually, The Leaf loved his Anna Karenina, and the 60-some dancers are quite spectacular, if skinny to the point of being heroin chic, but Don Q is one of my least favorite ballets, no matter who does it or how many fouettés the prima manages to toss off. (Hint: it’s usually 32, though our Kitri didn’t come close to that number in the Big Orange. But hey – who’s counting?)

That Eifman chose to set his ballet in a nuthouse was certainly his prerogative, but some, er, restraint(s) were in order. Whatever! As I seem to be the L.A. Times go-to gal for covering performances at the recently re-christened Segerstrom Center for the Arts, I was happy just to have made it back safely and ultimately pound out my thoughts. Click here for my review. (Note: This critique could possibly have the most film references per paragraph of any I’ve ever written.)

P.S. And for those wanting a dose of the Facial Flex, The Leaf is still pondering her sudden internet stardom thanks to the Huffington Post. (I never thought I’d be saying that!) In any case, more to come. Until then, here’s my idea of a baby ballerina. Aww! 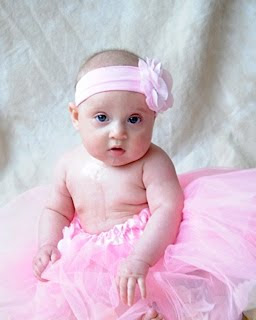