Posted on January 12, 2012 by Victoria Looseleaf 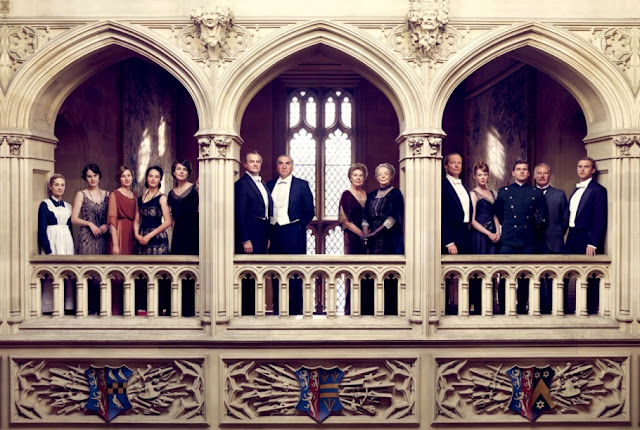 Okay, so we arrived a tad late to the party, the feast that is Downton Abbey, the series that won six Emmys last year and will probably clean up at the Globes this weekend. But we’re in full-throttle mode now. Devouring most of Season 1 over Christmas weekend and catching the final episode after we came back from San Francisco in early January, we’re now spreading the gospel. (We recently hooked Mr. Looseleaf on the series, which is tres cool, cuz we can now iChat about all of the brouhaha erupting at the fictional estate of Downton Abbey.) 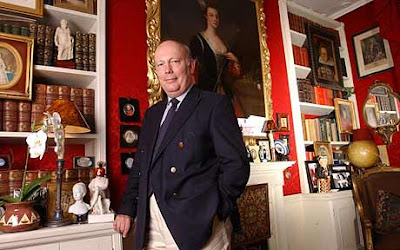 For those not in the loop, DA is a public television series chronicling the aristocratic Crawleys, set during the late Edwardian era, beginning with the news of the Titanic’s sinking. Originally created and written as a mini-series (four eps of 90 minutes each), by the fabulous Julian Fellowes (left, he won a Best Screenplay Oscar for the late Robert Altman-directed 2001 film, Gosford Park), DA is a guilty pleasure…and then some. 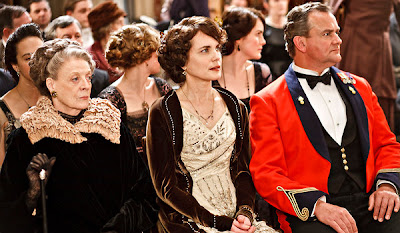 Featuring a stellar ensemble cast (hello, Maggie Smith, dowager divine, who delivers her zingers with such style we can’t help but laugh out loud), deliriously gorgeous costumes and scenery, and clever plot lines, DA is a frothy, intriguing foray into a fantasy kind of life, i.e., Twitterless, that now seems eons ago.

In a nutshell: The series revolves around Lord and Lady Grantham (Hugh Bonneville and Elizabeth McGovern as Cora, his American-born heiress wife, respectively); the Lord’s redoubtable mother, the Dowager Countess (Smith); and three eligible daughters, none of whom, however, are able to inherit the estate due to an antiquated British law known as an ‘entail.’ Enter then third cousin Matthew Crawley (Dan Stevens), a middle-class barrister, and his mother Isobel (Penelope Wilton), ready to ascend to the manor, er, unborn. 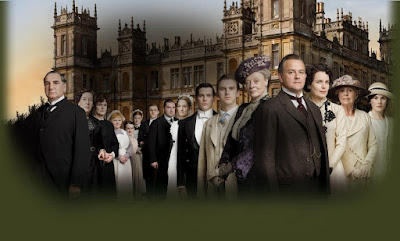 The high jinx of this high-bred family are paralleled by a hierarchy of servants with their own machinations, including affairs, ambitions and what-have-yous. And while the Crawleys, in that veddy, veddy British fashion, keep their feelings from one another, they have no compunctions about unburdening themselves to their trusted maids and valets. (Who needs a therapist, hah!) 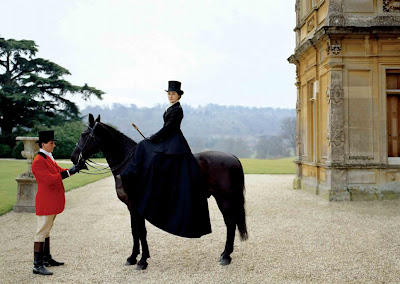 The class system is, of course, on unbridled view, with the help, generally loyal to the family to a fault, remaining unshakeable with regards to any standard-loosening. The view is also one of hard-core Romanticism, especially that evoked by the Crawleys’ first-born, Lady Mary (Michelle Dockery), a morass of feelings, rebelliousness and darkness, her delicate beauty scorching the small screen, even when she rides with the hounds (left). 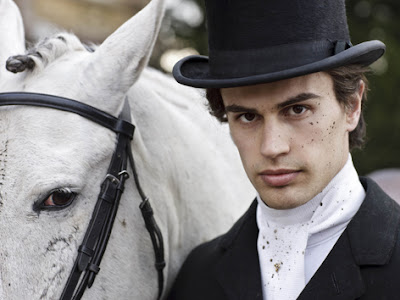 So: Will she or will she not marry cousin Matthew, solving the inheritance issue? Or will she have – gasp – a one-night stand with the handsome Turk, Kemal Pamuk (Theo James, right, with mud on his face, which should be the worst that fate doles out to him), an event that will come back to haunt the family in Season 2. (That season, which began last Sunday, opens in 1916, with the two-hour episode drenched in the blood and horrors of World War I.)

And what would romantic intrigue be without any homosexual under(over) tones. Cue evil footman Thomas (Rob James-Collier), while the downstairs love factor also becomes heated: Lord G’s valet, the lame Bates (Brendan Coyle), and Lady’s maid Anna (Joanne Froggatt, below), exchange words of love and darting looks, although the deed remains unconsummated, with Season 2 bringing melodramatic surprises for this pair. 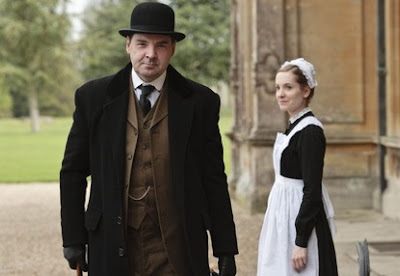 Who knew, as well, that middle daughter, spinster Lady Edith (Laura Carmichael), could be as conniving as Iago, while the youngest, Lady Sybil (Jessica Brown-Findlay, below left), a feminist, is the first to embrace a changing England (and her chauffeur), because others seem to be in denial or, worse yet, not even notice the future hurtling towards them.

Ultimately, though, we must ask ourselves why we care about British aristocracy. For one reason, we at The Report are mad about Englishmen, lordly or not (click here for our Ricky Gervais coverage; here for Ben Whishaw; here for Keith Richards; here for Julian Barnes; and coming soon, Gary Oldman and Colin Firth). For another, the American idea of aristocracy, say, the Kennedys, has seemed to morph into an obsession with, ugh, celebrities, and face it: Beyoncé, J. Lo, etal, cannot hold a candle to the DA characters whose aura of magical mystery, both haute and low, will forever have a hold on us, no matter how far removed from finely polished flatware we find ourselves. 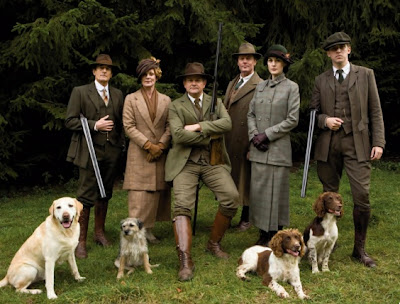 Finally, Downton Abbey, a dream of a series, makes for great water cooler conversation (not that we go into an office, our water cooler being a Brita filter), and since Boardwalk Empire and Homeland have both finished their respective seasons (click here for our coverage of BE and here for the Claire Danes/Damian Lewis show), and it’s been years since The Sopranos was on HBO, Sunday nights are once again providing our favorite escape. Something akin to Godiva chocolates, truffles and foie gras – though the California ban against the forced-fed goose liver delicacy will soon take effect – Downton Abbey, class with sass, has thrust us once again into a golden age of television.

THIS JUST IN: Riding the Downton Abbey bullet train, the beloved actor/hoofer/New Age goddess, Ms. Shirley MacLaine, will be joining the lords and ladies of the realm next season. (Click here for info on Shirley being honored with the AFI Lifetime Achievement award this June.) DA has cast the Oscar-winning thespian to play Martha Levinson, the American mother of Lady Grantham. And even our favorite news dude, Brian Williams, was excited about this casting coup, which should make for plenty of fireworks between MacLaine and the Dowager Countess. The third season begins shooting next month and is expected to have its premiere in Britain in September, meaning we Yankees won’t get it until January 2013. Our only question: Will Shirley be asked to cut a rug, or at least strut her still spunky stuff in some cool fashion? We hope so, as evidenced in this clip, choreographed by the inimitable Alan Johnson. (Thanks Dance Magazine EIC, Wendy Perron, for finding the clip!)