Eugene Onegin: Living Unhappily Ever After

Posted on September 21, 2011 by Victoria Looseleaf 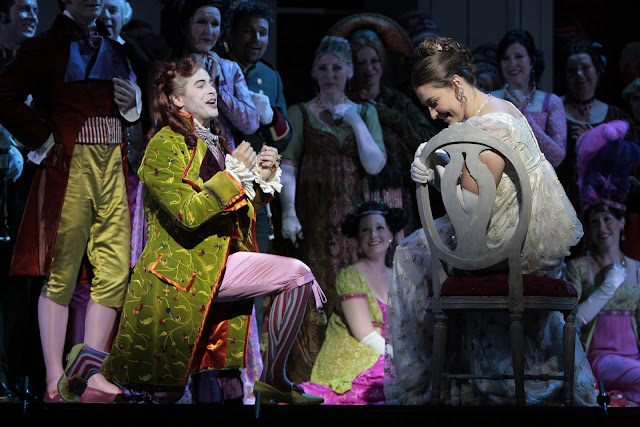 Audience fashion faux pas abounded, and the curtain came clunking down – not once, but twice – on opening night of Los Angeles Opera’s 26th season. Funny that, as the curtain also “lurched” when Plácido Domingo sang Otello a quarter century ago to inaugurate the opera company that’s served as a kind of ground zero for the performing arts in the City of Angels (the LA Philharmonic, notwithstanding, though that they are now standing in Walt Disney Concert Hall has also helped put our erstwhile cow town on the cultural map).

The production was Tchaikovsky‘s Eugene Onegin – a company first, but one imported from London’s Royal Opera – whose original director, Stephen Pimlott, died in 2007. (It’s not quite as bad as Mel Gussow, a New York Times writer who penned an obituary of Elizabeth Taylor when she died in March, six years after he himself croaked …click here to read that and click here for The Report’s coverage of La Liz). Pimlott’s duties had been passed on to Francesca Gilpin, who did a crack job on LA Opera’s The Turn of the Screw last season (click here for our coverage), which she handled with skill in this mounting, if not scintillatingly so.

Full Disclosure: We at The Report did love the first act scrim featuring a painting of a crouching male nude, which, we believe, is a symbol of Tchaikovsky’s own tormented soul – gay, libidinous, repressed and/or otherwise. 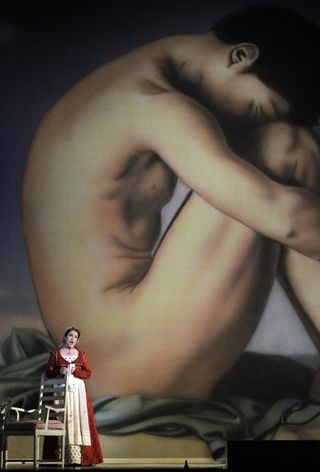 As for plot, it’s typical operatic fare, with Onegin (baritone Dalibor Jenis), rejecting girly girl Tatiana (soprano Oksana Dyka), before killing his best friend Lensky (tenor Vsevolod Grivnov) in a pistol-packing duel. Eventually seeing the folly of his ways when he encounters Tatiana in the last act, Onegin realizes he really does/did love her. Alas: Tatiana is now a Princess, having married an older titled dude, and though she, too, loves Onegin, she won’t abdicate her metaphorical throne, choosing, instead, to abide by society’s dictums that insist she stand by her man. And about that famous Act I letter scene (the story is based on Alexander Pushkin’s verse novel), Dyka delivered what is one of opera’s longest arias in a good, if not goosebump-evoking performance.

Oh, and speaking of duels, we gotta say: We love ‘em and wish they were still de rigeur, au courant, en vogue, cuz there are several persons we can think of whom we would be shooting, with glee, we might add, given the opportunity. But then that’s another story…or two. 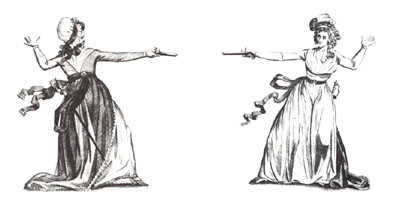 Back to Onegin: To have nary a star belter on opening night is a bit puzzling, although the aforementioned warblers –  all making their LA Opera debuts – acquitted themselves just fine, including the sprightly mezzo Ekaterina Semenchuk as Tatiana’s sister, Olga. So, too, were small parts, presented with diligence: Bass James Creswell (Prince Gremin), was an LA Opera Young Artist a decade ago, so it was nice to hear him in full, er, flower; mezzo Ronnita Nicole Miler assayed Tatiana’s nurse, Filipievna, with verve; and Margaret Thompson (pictured above with the nude), also passed mezzo muster as Tatiana’s mother, Larina.

Ultimately, though, it’s Tchaikovsky’s music that thrills. And with Maestro James Conlon giving his customary all in the pit, the Russian’s lush melodies, rich harmonies and enticing rhythms quickened the pulse and opened the heart, temporarily taking us away from the workaday world we know and transporting us somewhere else…far, far away. Whatever Conlon’s on, we at The Report want some, as the energy, passion and stamina needed to make music as he does, boggle the mind. 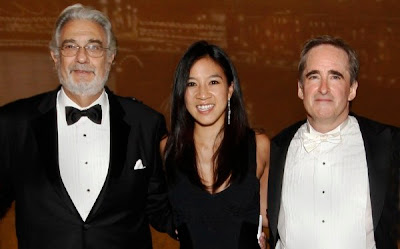 As for danceable tunes (this production is being touted as “From the composer of “Swan Lake” and “Nutcracker” – oy…so click here to read our Black Swan coverage), the original choreography is credited to Linda Dobell, with the Finn Ulrika Hallberg doing her best on what effectively ends up being a very crowded stage: Anthony McDonald’s set includes a rural tableau as well as a “river” which, when frozen, becomes a pond for Hans Brinker types  (erstwhile Olympic skater Michelle Kwan, seen above with Domingo and Conlon, was in the house; so much for attracting glitz to the opening night of the so-called fall season). McDonald also designed the costumes, which were lavish and luxe, but occasionally looked as if they could have come from Hoarders, the pile-up quotient too much for the room. A pity, as the dancers barely had space enough to sashay in the ballroom waltz scene, with the area looking more crowded than a Tokyo subway at rush hour, albeit better lighted, courtesy of Peter Mumford’s original design.

Speaking of dancers, we at The Report recommend Eugene Onegin the ballet, which is in the repertory of more than 20 ballet troupes, including Boris Eifman Ballet, Stuttgart Ballet and National Ballet of Canada, with choreographers such as John Cranko and Eifman (click here to read our take on his Don Quixote, including our review for the LA Times), putting their imprimatur on the story where, simply put, everybody lives unhappily ever after.

In short: If not exactly overwhelmingly sumptuous, this Onegin was far from bloodless and could very well improve with age. 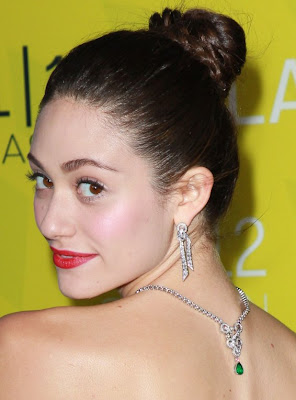 Finally: What’s a gala opening night without a gala party? The pre-performance soiree, chaired by actor Emmy Rossum, was closed to The Report, but the after-party, which went for broke – at least as far as the “talent” was concerned – welcomed us. Dare we mention that the serving dames looked like, well, working girls imported from Brighton Beach. (We don’t watch Lifetime TV’s reality show, Russian Dolls, but we’re familiar with their ilk, one that’s been featured in shows such as our favorite, The Sopranos. Who can forget the one-legged FICA-favoring bookkeeper, Svetlana, or Tony Soprano’s hard-drinking galpal, Irina.) 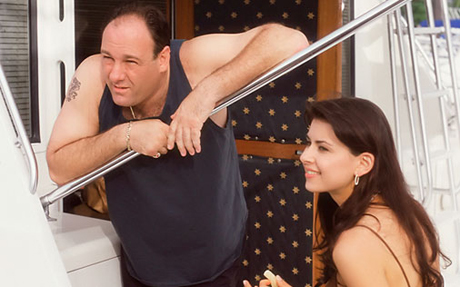 Whatever: The glorious gala gals were dressed in all-white, serving up piroges, White Russians and fig-infused vodka drinks, all to the sounds of a 12-piece cover band, also white-clad. Everything was white, actually, as a way of paying homage to Russia’s famous White Nights Festival – which, unfortunately, happens to be in June. Still, seeing a fetching babe dancing around the room wearing a huge, dessert-laden table was kinda cool – or beyond kitsch, in any case.

“Do we eat off of her skirt,” we wanted to know, wondering, as well, where the Hopak-kicking Cossacks and caviar were. Ah: Just another night on the town for the hard-working scribes of The Looseleaf Report.