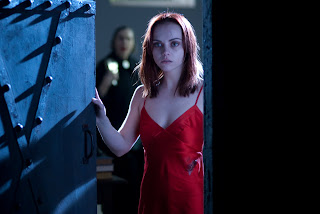 I might just as well have called this review “Necrophiliac’s Delight,” because that’s what this queasy, creepy film is—a cinematic work designed to sexually excite those among us who are turned on by the idea of making love to a beautiful young corpse. And that exquisite corpse—or is it?—is played by Christina Ricci, who parades around a mortuary in the fetching red satin slip that she died in, though she also spends a great deal of time completely nude, and the camera does not shy away from lingering over her pert, dead nipples. So if your idea of a dream lover is a very pale Ms. Ricci laid out on an embalming slab, and you’re not put off by that rather unbecoming gash in her forehead, then After.Life is the movie of your dreams.

Let’s not even talk about the nonsensical plot, beyond saying that Ricci’s character, Anna Taylor, is killed in a car crash after a fight with her boyfriend Paul Conran (Justin Long)—who brings to mind David Schwimmer as Ross (minus the whining)—and her body is turned over to a sinister, Twilight Zone–style funeral director, Eliot Deacon (Liam Neeson), who possess the ability to talk to the dead (or does he?). There’s another Twilight Zone–ish touch, as well—the old dead-person-calling-on-the-telephone routine. Add a pinch of Roger Corman’s take on Edgar Allan Poe’s “The Fall of the House of Usher,” and I think you’ve got the picture.

All of which is not to say that After.Life is without merit. Writer-director Agnieszka Wojtowicz-Vosloo did a fine job creating the macabre funeral parlor atmosphere—this is definitely not the cozy family world of Six Feet Under—and the film did indeed creep the hell out of me, until it began to grow tedious. But in terms of plot and logic and sheer compellingness, it doesn’t come close to modern horror classics like The Others or The Sixth Sense, both of which I enjoyed without reservation. But I will say that if I’d seen this film when I was eight, as I was when I saw The House of Usher, I’d have had nightmares for at least the next year.