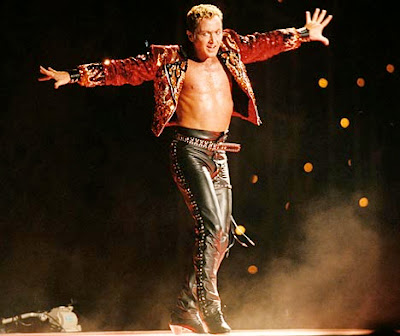 It’s safe to say that that Michael Flatley did for Irish step-dancing what the late Jane Russell did for the push-up bra. (With gravity eventually bringing them both down – though Ms. Russell actually passed away recently at 89 from a respiratory-related illness). 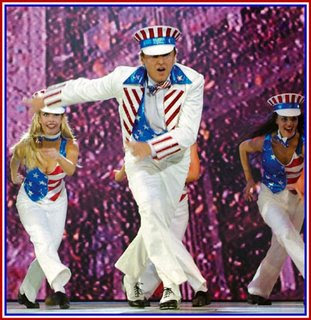 Undeniably, Chicago-born Flatley can hoof, and seeing him live was worth the schlep to Anaheim for The Leaf (read my 2005 Los Angeles Times review here). It seems, though, that in 2006, the King of the stiff-torsoed/manic leg dance was felled by a mysterious virus, leaving him unable to walk, much less strut around onstage like a preening peacock in between bouts of executing fusillade-style footwork, reportedly 35 taps a second. (Or so saeth the Guinness Book of Records.)

But after consulting 50 – count ‘em – 50 doctors, Flatley says he was miraculously healed. This was a sign, he felt, to put on another Lord of the Dance extravaganza for his adoring acolytes. (A reported 60 million have seen the live version since its 1996 debut, and a direct-to-video flick was released in 1997).

Though this time, Flatley, like Bieber, Cyrus and the Jonas Brothers before him, would have it filmed in 3D, courtesy of Marcus Viner. Oy! Even the film’s intro is pompous, with the Flatster blustering on in clichéd catchphrases: “It’s like pushing an elephant up a hill.” “It’s like going back into the lion’s den.” (Grr!) “There can’t be a great army without a great general.” 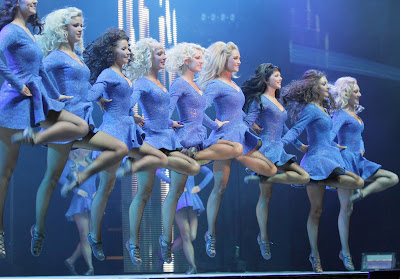 There ain’t nothin’ like a dame, even if these chorines are far from the Rockettes!

And he goes on. And so does The Leaf. Click here to read my L.A. Times review of the film. You won’t even need 3D glasses.

(And you won’t see my original last line: “Even the I.R.A. couldn’t have concocted a bigger bomb.” Sure, I knew this was over the top and the apotheosis of bad taste, even pour moi, but since the powers that be at the Times, by consensus, said the line had to go, poof – it was excised from the family-friendly paper.)