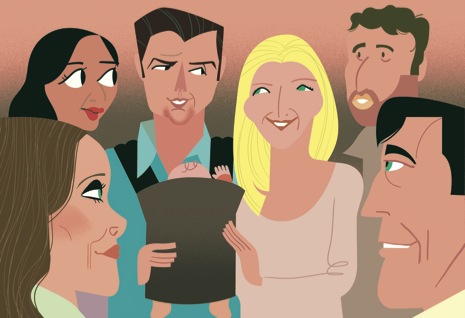 Between going to a cool Purim party (best costume was a Julius Caesar toga, replete with spangled, pinking-sheared trim), which was really an all-out drunken wine tasting (the vineyards, of course, were Jewish-owned, with a 2009 Honig Cabernet absolutely lip-smacking), teaching Dance History at USC, and hunkering down to finally begin work on our long-awaited e-book (the title’s so hot we’re trademarking it), we’re just now getting around to this week’s post. 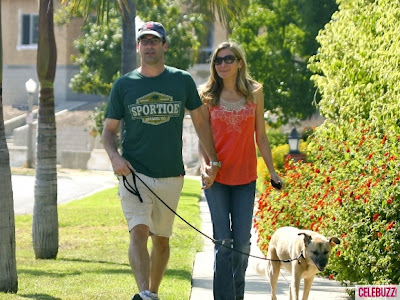 Still, we did manage to check out Los Angeles Ballet’s Swan Lake (click here for our LA Times review and here for a more in-depth look at the avian ballet), as well as catch a screening of Jennifer Westfeldt’s directorial debut, Friends With Kids. Having had her biggest success with Kissing Jessica Stein (and an even bigger coup in coupling with Mad Men’s Jon Hamm – the pair have been together since the late ‘90s), Westfeldt is a gentile Woody Allen…kind of. She is also, unfortunately, a Diane Keaton wannabe (click here for our take on Keaton and her brilliant memoir, Then Again), and therein lies the problem(s).

The movie, basically a predictable rom-com, posits the question, ‘Can sexual attraction survive childbirth,’ with its answer being, ‘No, so why not have platonic pals procreate while seeking other life/sexual partners?’ And while this thesis did lead to some funny lines/situations, we weren’t in love with the film. Indeed, there is something about it that just doesn’t work. After scratching our heads, we’ve come up with the following theories.

Westfeldt, attractive enough, is no Diane Keaton, as mentioned above, and inserting herself in the lead role is a mistake, no matter that she also wrote and produced the film. It also seems Westfeldt has had some work done and thus has a hard time truly emoting (click here for our take on the Goddess of Plastic Surgery, Joan Rivers). 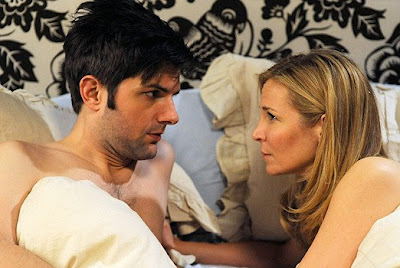 We also didn’t care for her co-star, Adam Scott, a lothario (huh?), named Jason, who insists he’s not sexually into Westfeldt’s Julie, but somehow has enough heat to attract the bootylicious Mary Jane (Megan Fox).  We’d never heard of the dude, Scott, but, short and lubricious-like, he apparently stars in Parks and Recreation and also has a recurring role on HBO’s Eastbound & Down. (For anything HBO, we turn instead to the recently-ended Boardwalk Empire, now available On Demand; and currently are lapping up Luck, starring the bromantic duo Dustin Hoffman and Dennis Farina as today’s answer to Midnight Cowboy‘s Ratzo Rizzo and Joe Buck, albeit a pair with dough. We also dig the latest Ricky Gervais show, Life’s Too Short, which, to us – and contrary to most critics’ opinions – is so far so good.) 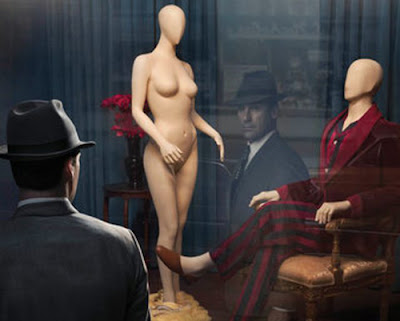 But we digress. The supporting roles are well-cast – hello, Bridesmaids – with the kid-bearing couples, Kristen Wiig and Hamm, and Maya Rudolph and Chris O’Dowd, completing the ensemble. But Bridesmaids it ain’t (or so we’re told; sue us, cuz we haven’t yet caught that film, having been in Europe during its box-office boffodom; click here for some of our overseas coverage; here for yet more of that reportage.) We do know, however, that we would rather see Hamm in the lead and Westfeldt in a supporting role. (Happily, we don’t have much longer to wait for the two-hour premiere of Season 5 of Mad Men, which begins March 25, filling the void that Downton Abbey has left…) 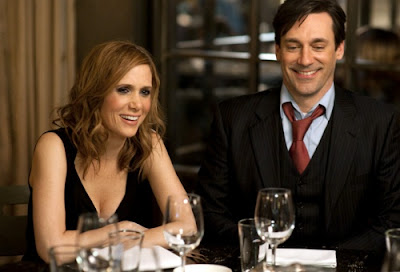 And while FWK is requisitely chatty, it’s about as daring as pastrami with mayo, and a wee bit too hip for the room: men blathering about Kegel exercises – really? Friends With Kids, as the New Yorker notes (cover caricature by Clayton Junior), is more like the TV series, Friends (we never watched one ep, truly), with a few kids thrown in for good – or bad – measure. Westfeldt is talented, but as an auteur she’s no Orson Welles. (In fairness, who is?) This is a small, forgettable flick that will suffice on the small screen, with its last line probably the worst ever uttered in cinematic history: Far from the poetry of Citizen Kane’s “Rosebud” (itself a reference to a female organ, but who knew?), or Casablanca’s Rick offering these glorious words, “Louis, I think this is the beginning of a beautiful friendship,” Julie, alas, says to Jason, “Fuck the shit out of me.”  Talk about a romantic faux mot. Pass the Purim wine, s’il vous plait!