Good Things in a Gigantic Package 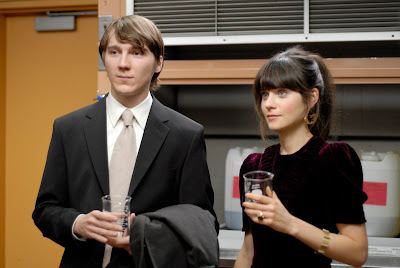 There is a big mystery at the heart of Gigantic. (A smaller mystery is what the title means.) I’m going to skirt around it because to truly get into it would be quite the spoiler. (I still haven’t totally forgiven my husband for inadvertently giving away the secret of The Crying Game minutes before it started.) Suffice it to say that this facet of the film, which involves a homicidal homeless man, throws one’s perceptions into tumult: Specifically, is Brian Weathersby (Paul Dano), the young protagonist, really the calm, centered eye in the storm of surrounding über-eccentrics—mainly his research-scientist friend, who swills vodka from beakers; his family, including Ed Asner as his ebullient, mushroom-ingesting dad; and his new girlfriend’s family, including John Goodman as her overbearing, tumor-expelling dad?

Not to mention the new girlfriend herself, Harriet Lolly, who appears in Brian’s Brooklyn mattress salesroom in the beguiling form of Zooey Deschanel, who, with her big—or should I say gigantic?—blue eyes, comic timing, and heartstring-tugging abilities, is our new Goldie Hawn (sorry, Kate). Despite Harriet’s sometimes hurtful flakiness, we cannot resist her and neither can Brian. When she falls asleep on a $14,000 Swedish mattress soon after they meet, he not only doesn’t wake her but gently places a blanket over her. Harriet, we soon discover, could use this kind of care, giving the lie to her nickname of “Happy.” Indeed, Brian is so nurturing that he is in the process of adopting a baby from China. Which will place two abandoned females—in Harriet’s case, by her mother—in good hands. (Won’t it?)

To my mind, first-time feature filmmaker Matt Aselton leaves too much unexplained—and lets the hilarious Goodman leave the movie a bit too soon—but this is still a delicate, intelligent, funny romance, and when you really think about it, like a single 20-something New York guy who wants above all to adopt a baby, there aren’t too many of those around.