If He Builds It Will They Come? 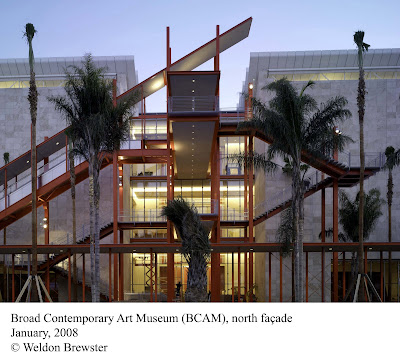 Well, the $5 million I wished I had to lend myself obviously never materialized (and JAG that I am—Jewish American Goddess—I refuse to buy lottery tickets), but I do manage to find solace in a quote from my hero, Tony Soprano: “Whaddya gonna do?”

For me, all I can do is continue eking out a living by the written word, in this case, analyzing Haydn’s Maria Theresa Mass. Barring that, I take joy in Obamarama-land and in other divertissements, namely trekking to Los Angeles’ newest jewel in her rather lopsided cultural crown.

I’m talking about the 60,000 square foot Broad Contemporary Art Museum. Known affectionately (?), as BCAM, it’s an addition to the Los Angeles County Museum of Art, with the whole kit and caboodle just down the street from that other sacrosanct destination point, the La Brea Tar Pits.

In order to get a slice of that culture—and a free lunch (the braised short ribs were wonderful)—I, along with several hundred other select invitees, attended a press preview of the building that went up in a mere two years. Financed by billionaire megalomaniac Eli Broad (if he had his way, this town would be called Broad City, and should that day ever arrive, I decamp for Napa for good), the $56 million edifice was designed by Renzo Piano.

Who knew this 70-year old Italian/erstwhile starchitect (his greatest building, Paris’ Pompidou Center, was built in 1977), had an affinity for Target and K-Mart. Basically a three-story travertine-clad box, BCAM is accented with reddish-orange colored structural accents, including an exterior escalator (reminiscent of one of L.A.’s first great malls, The Beverly Center) and steel beams. Charles Ray’s life-size, flame red Firetruck also sits on the newly designed plaza, itself covered by a 15,000 square foot “canopy” held up by more of those orange-hued girders.

Beckoning (or not) from Wilshire Boulevard is Chris Burden’s Urban Light. An installation of 202 restored and fully operational vintage streetlights (cost unannounced but it’s gotta be high), the whole entrance thing is now a crowded, smooshed-together affair. The Burden piece, acquired by museum director Michael Govan, seems an afterthought, if only so Govan could assert his power in the face of the long rich reach of Broad.

In any case, landscape artist Robert Irwin is hoping for more magic with his palm garden (he did the lush foliage at the Getty Center, a decided notch up from most of the art, Van Gogh’s $53.9 million Irises notwithstanding), but who the hell doesn’t love a palm tree.

Also making use of the L.A. aesthetic (light, light, and more eternal light—God, we need rain), Piano has, to his credit, created rows of what can only be called fins, jutting diagonally on the roof as part of a system that brings natural illumination into two massive top-floor exhibition suites.

Prego for that, Signor Piano, now what about the $64 million question: How’s the art? No surprise that there’s nary a surprise in sight, with Broad lending 220 works for the inaugural exhibition, not donating his collection, as originally planned. But, like most covetous billionaires, Broad decided to hang onto his goodies, thus retaining total control while simultaneously giving the new institution yet another patina—that of egg on its face. 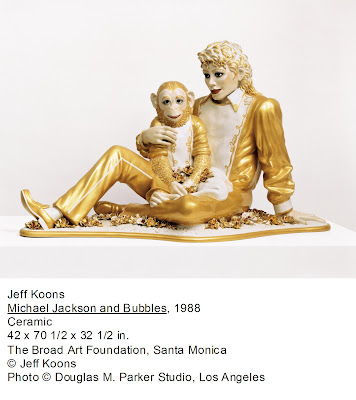 There’s a huge room devoted to Jeff Koons, with plenty of gawkers surrounding Michael Jackson and Bubbles, (happy 25th anniversary, btw, to Jackson’s masterpiece, Thriller), as well as Koons’ Cracked Egg (Red), the museum’s de facto logo that has sprouted all over the city touting, “BCAM—Born.”

From John Baldessari (his twin, oversize banners—52 by 55 feet—adorn the Wilshire façade), and Damien Hirst (his dead shark in formaldehyde is not here, but a pill installation is, reminding me that if I want meds, I go to my pharmacist, not a museum), to Jean-Michel Basquiat (the Warhol-mentored dude who OD’d on heroin in 1988), the show is definitely the greatest hits of way pricey art. 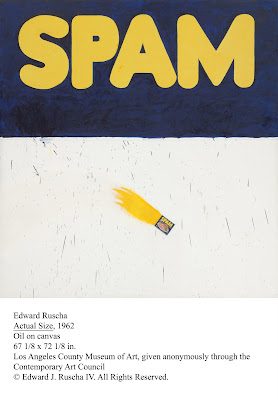 There’s also the quintessential Californian, Edward Ruscha, and the late East coaster, Roy Lichtenstein (he was my father, Fenton West’s fraternity buddy at Ohio State University, about whom Daddy recalls, “He was always drawing, but I remember his piano playing…”).

As to the remaining usual suspects: Sure, I love the stellar works of Jasper Johns and Robert Rauschenberg, but 55, count ‘em, 55 pieces by Cindy Sherman? And all these works displayed in the same old, same old…way. As L.A. Times architecture critic, Christopher Hawthorne writes, “…the whole enterprise seems stalled in the late 1980s.”

But there is a marvelous Richard Serra sculpture, the 193-ton Band from 2006. Created for MOMA (click here for a video tour), it is, when you walk through it, like a funhouse ride. Too bad, then, that it’s on the first floor, where midget-size ceilings and poor lighting not only induce claustrophobia, but give short shrift to the steel’s otherwise gloriously morphable colors. I mean: What large glass windows, natural light and a truly elevated ceiling could have done for the sculpture’s textures and sheens we can only guess.

An antithesis to Picasso’s quote, “Art is the elimination of the unnecessary,” BCAM needs more than big bucks to prove itself. Nevertheless, come one, come all—the entrance fee is a measly $12 bucks for adults (compared to MOMA’s $20), with its opening weekend free and sponsored by—who else—Target.