In the Mood for Pie 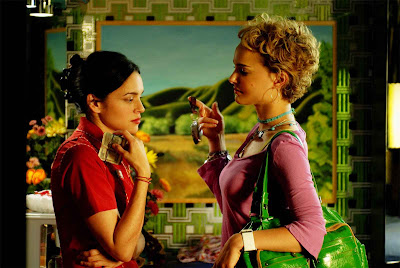 Elizabeth (Norah Jones, in her movie debut) contemplates providing a stake for poker player Leslie (Natalie Portman), with a Jaguar in the balance.

Remember the huge hypodermic needle in Pulp Fiction that John Travola desperately jabbed into Uma Thurman’s chest, bringing her back to life? For Wong Kar Wai’s new movie, that humungous needle is Natalie Portman, who injects a jolt of juice into My Blueberry Nights about two-thirds of the way through, just when you think you’ve been stylized, poeticized, and melodramaticized into a near coma. Portman, playing a gambler with a bad brassy-blond haircut, accomplishes what the likes of Jude Law, Rachel Weisz, and the esteemed David Strathairn cannot manage: she creates a believable character in the midst of a completely unbelievable story.

Portman, unfortunately, does not play the protagonist. Elizabeth—aka Lizzie, Betty, Beth—takes the form of singer Norah Jones, she of the obscenely creamy voice. I’m going to guess that Wong chose Jones—as opposed to, say, Courtney Love—because, while beautiful, she also has a childlike, innocent appeal. Not once but twice are we asked to contemplate, along with Law, who constantly smiles at her as though she were a baby or a puppy, her sleeping face besmeared with vanilla ice cream (though come to think of it, talk about obscene…). After being jilted (somehow that old-fashioned word seems right for this film), Elizabeth hits the road, waitressing and bartending her way across the country and sending postcards to Law’s Jeremy, a Brooklyn café owner, telling him all about the colorful people she meets. These include a cop named Arnie (Strathairn), who’s so in love with his estranged wife, the blowsy Sue Lynn (Weisz), that he drinks all the time, never pays his bar tab, and brutally beats up Sue Lynn’s new boyfriend. Somehow, this is all supposed to make Arnie extremely lovable and his wife totally contemptible. (It’s just that kind of movie.) Set against these broadly drawn characters, Elizabeth comes across as a tabula rasa, which would be okay if she weren’t quite so rasa. It’s hard to accept that someone this passive could muster up the energy to take all those buses and answer all those help-wanted ads.

Perhaps the movie is meant to be a fable of sorts. How else to explain this line (more or less) that Jeremy says to Elizabeth, both—isn’t it cute?—with bloody noses from different bullies: “You were on the subway? Why would you be on the subway?” As though no Brooklynite would stray from her own little corner, at least not when it’s shot so lovingly by cinematographer Darius Khondji. Indeed, the lush visuals, a staple of Wong’s, are almost enough to make the film worthwhile, if you don’t mind everything being fetishized—from pie à la mode to cigarette smoke. For some reason (those visuals?), everyone smokes in this movie, even the innocent Elizabeth and including Chan Marshall (whose Cat Power song “The Greatest” adds to the atmospheric effect), making a brief appearance as Katya, Jeremy’s ex-girlfriend. Fortunately, Katya speaks Blueberryse, the true language of Jeremy (though his comes with a botched Manchester accent). When she asks, “Sometimes even if you have the keys, those doors still can’t be opened, can they?,” he replies (with that goddamned smile), “Even if the door is open, the person you’re looking for may not be there.” Well okay, maybe that’s better than “I met a younger woman who gets me all hot when she eats ice cream.”

Part of the problem may be that this is Wong’s first English-language feature film (written with the mystery-novelist Lawrence Block). Certainly the Hong Kong director’s ripe style, in films such as In the Mood for Love, has won him many fans and accolades in the past. I’m just glad he had the good sense with My Blueberry Nights to cast Portman as Leslie, the wispy high roller who threatens to walk away with all the chips and most the movie.