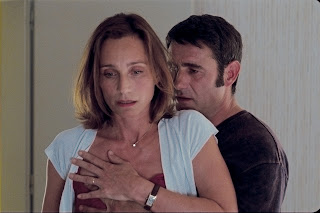 What they did for love: Kristin Scott Thomas
and Sergi López.

We first discovered Kristin Scott Thomas in the African desert, wowing Ralph Fiennes with her Katharine Hepburn–esque trousers and, later, her elegant clavicle. (Small-breasted women everywhere felt a moment of triumph as she glided sinuously from bed to tub.) Their illicit affair was at the heart of the somewhat soapy The English Patient, which provided that breakout role for Scott Thomas. Fourteen years later, we find her, as Suzanne in Leaving (Partir), in the lush South of France, married to a doctor and living with him and their teenage children in a sleek, well-appointed house. Suzanne is The Woman Who Has Everything—except, of course, passionate love, and so she is about to tumble for a penniless Spanish workman. He, Ivan (Sergi López), has come to help build her new reflexology office on the estate; their first meeting occurs when he spies her caressing her own foot while intoning other parts of the body.

Their efforts to keep afloat—does this well-established woman have no friends or family who could lend her a little money?—finally reach a point that you may or may not be able to accept. My fellow blogger Adam Nadler used the word “ridiculous” to describe it, while “unhinged” popped into my mind in regard to Suzanne. Perhaps this was intended, but since her actions strain credulity, even the remarkable Scott Thomas, who was nominated for a César Award for meilleure actrice for the role, cannot fully get back the pathos the story warrants. Still, watch her expressive, wide-eyed face—reminiscent of Diane Lane’s in the similar Unfaithful, itself based on the late Claude Chabrol’s film La Femme Infidèle—and fall in love again, consequence-free.