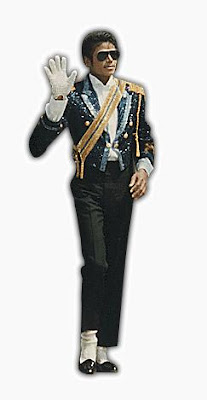 I wrote this piece in March 2001 for the website New Media Music (now defunct). In light of Jackson’s death yesterday, we’ve decided to reprint it here.

Last week, when I was rooting around the music news looking for something funny to write about, I came across several items about Michael Jackson. Jackson had made a speech at Oxford University in connection with his new charity, Heal the Kids.

The comic and bizarre elements were nearly irresistible: Jackson’s partner in the charity is the media-savvy Orthodox rabbi Shmuley Boteach, who wrote Kosher Sex and Dating Secrets of the Ten Commandments. The pop star had come to London to be best man at the wedding of super-psychic Uri Gellar, known mainly for telekinetically bending spoons. On the night of his speech, Jackson hosted a dinner at the imposing, this-must-be-England Blenheim Palace, but the red carpet supplied by the Duke of Marlborough had a gloss of disinfectant to prevent foot-and-mouth disease. Jackson himself must have hobbled down that carpet on crutches, because his broken foot was in a cast (further protecting it from the highly contagious disease, I guess). His address was made to the esteemed Oxford Union debating society, whose past guests include—I will leave it to you to figure out the criteria—Jerry Hall, Richard Nixon, Mother Teresa, O.J. Simpson, and Albert Einstein. (Jackson allowed, rather cutely, that he had never reached the scientific heights of Einstein, but that Einstein was “really terrible” at doing the moonwalk.) And, of course, reporters were latching on to the irony of someone once accused of child molestation heading an organization to “heal the kids.”

And that gave me pause. Child molestation, obviously, is not funny. Being accused of such abuse—Jackson settled out of court but maintained his innocence—is not funny. The need for organizations to urge parents to treat their children well—also not funny. And that’s not even getting into the entertainer’s speech, a tearful account of a hard-driving father who “never” showed him love.

The Man in the Mirror

So I had already abandoned the idea of a humorous little piece when I clicked on—merely out of curiosity—a recent close-up photo of Jackson that Salon.com couldn’t help hilariously commenting on. It was indeed weirdly fascinating. The huge doe eyes, the Pinocchio (before the lies) nose, the red asymmetrical mouth—all against preternaturally alabaster skin. As I was staring at it, a colleague stopped at my cubicle to stare too. After a moment, he said that he thought Jackson’s children (Prince, 4, and Paris, 2) might bring him the unconditional love that he apparently craves, and that perhaps one day he will find a romantic partner who will do the same.

I felt very touched by his words, and later I realized why. How often do you hear anyone—aside from hysterical fans and celebrity friends like Elizabeth Taylor—say anything kind about Michael Jackson? Ever since his first nose job, he’s been fodder for the late-night comedians. How could they resist? The chimp Bubbles and the rest of the menagerie, the Neverland ranch, the hair ablaze, the jeweled glove, the Band-Aids (did I make that one up?), the high-pitched voice, the brief marriage to Lisa Marie Presley, the ever-whitening skin, the ever-mutating features—these are parts of a mysterious life that seems almost designed to bring on ridicule.

But how often do we wonder what drove Michael Jackson, now 42, to cling to a Peter Pan existence and to so radically change his appearance? It brings up all kinds of identity and self-esteem questions. Couldn’t it be a cry for help, this frequent surgery (and what physical pain it must entail)—something like those people years ago who underwent procedures to make themselves look like Janis Joplin and Elvis Presley (as though they were happy).

In his song “Man in the Mirror,” Jackson, perhaps tellingly, does not see a body when he looks at his reflection, but rather the spiritual side of himself: “I’m starting with the man in the mirror/ I’m asking him to change his ways.” The song is that of a person asking himself to be better, more caring. With his events on behalf of his charity (he also recently spoke at Carnegie Hall), he may be emphasizing to his public that he is doing something to “make a change,” and that that’s more important than the way he looks or the latest tabloid report.

The Meaning of Rock

Jackson made it clear in his Oxford speech that he suffered as a child, belying the image of “the cheery five-year-old who belted out ‘Rockin’ Robin.’” Even then, long before the cosmetic changes, what we were seeing was only the surface. Obviously, he has not forgotten this emotional hurt; it still lurks inside of him. Creative people often express their pain in their art, but it’s hard to tell how much of a release his music is for Jackson, since he feels his father robbed him of his childhood by pushing him and his brothers to perform.

Nevertheless, he’s bound to feel honored on March 19, when he’ll be inducted into the Rock and Roll Hall of Fame—putting him in the company (this year) of Aerosmith, Paul Simon, and Steely Dan, among others. The hall of fame’s website says of Jackson: “There is no question that for the generation who came of age in the ’80s, Michael epitomizes what rock is about.”

Rock has always been about—whatever else—rebellion. In a society that tends to go for the shallow judgment, the shallow answer, the shallow value, rock ’n’ roll has often delved deeper. If this is what we get from our best artists, can’t we sometimes give it back to them?

This entry was posted in Heal the Kids, Man in the Mirror, MICHAEL JACKSON, Neverland, Rock and Roll Hall of Fame. Bookmark the permalink.