Of Turks, Tenors and Titillating Trillers: Il Turco in Italia 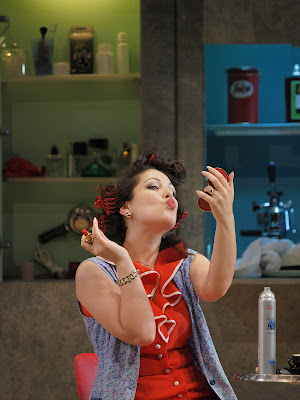 There’s something delicious about the way the word ‘Turk’ sounds in Italian. Il Turco. Kinda like turkey – er, Turkey. But The Turk in Italy, a Rossini confection from 1814, is far from being a clunker. Indeed, kudos to Los Angeles Opera for not only mounting this slightly obscure opera buffa, especially in hard times, but this particular orgy-infused production, courtesy of Bavarian State Opera and the controversial director Christof Loy. Of course, I am a Rossini fanatic, and even mentioned to my colleague/Los Angeles Times music critic, Mark Swed (we were classmates at Mills College and he actually was the first person to hear test pressings of my album Harpnosis), that I was thinking of changing my name, or at least hyphenating it to Victoria Looseleaf-Rossini.

Seriously, Rossini knows his way around a roulade, among other things, and the fine singers who populated the Dorothy Chandler Pavilion on opening night served the composer well. Of course, the plot, like most operatic stories, is absurd, but here, is also rampant with over-currents of hot-button issues – racism, immigration and sexual exploitation. Happily, it’s all done in jest. In Loy’s U.S. debut, he contemporizes the goings-on: Herbert Maurauer’s fabulous scenery and costumes rival those of any Marx Brothers movie – dozens of gypsies coming out of a tiny trailer begin the proceedings – and Mad Men-like cocktail finery all cleverly contribute to the onstage eye-candy. Johann Wolfgang von Goethe got it right when he said, “Opera consists of significant situations in artificially arranged sequence.” Obviously, this also applies to comedy.

So what’s the deal? We’ve got the Turkish prince Selim (bass-baritone Simone Alberghini, looking exotic in one earring and sounding devilishly cool), arriving via flying carpet and accompanied by his fez-wearing, sunglasses-sporting bodyguard – something The Leaf wouldn’t mind as part of her posse.

In any case, Selim has come to reconnect with a former slave/lover (are there any other kind?), the fortuneteller Zaida (mezzo-soprano Kate Lindsey in her L.A. Opera debut). But first he meets the luscious Fiorilla (soprano Nino Machaidze in a dazzling turn that gives Netrebko a run for her coloratura), starting the boffo/buffa ball rolling: Fiorilla is married to Don Geronio (baritone Paolo Gavanelli, in his Company debut, could have pranced out of the Rossini playbook), but is, being all sexually liberated and stuff, carrying on with Don Narciso (tenor Maxim Mironov in his U.S. bow must be the world’s skinniest purveyor of the high ‘C’s). 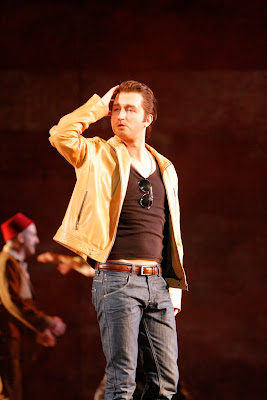 Is this Grease, Happy Days or American Graffiti? Photo courtesy of L.A. Opera

Add to this mix the loveable pratfalling poet, Prosdocimo, (baritone Thomas Allen can do no wrong), and we’ve got a recipe for Rossini madness at his best. With James Conlon keeping it together in the pit (okay – the horns were sometimes guilty of bleating), and the fabulous singing – from solos and duets to trios and some insanely gorgeous sextet warblings – all made for a delectable night in the theater. Your scribe was also crazy about Jacqueline Davenport’s ravishing choreography: In a nod to Robert Wilson there was the requisite slo-mo stuff, and lots of unisons ending in bewitching tableaux of coital coupling. Distracting? Yeah, but right up The Leaf’s, er, alley. 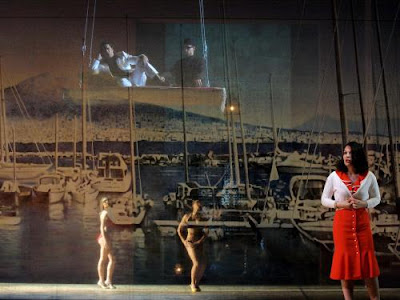 Take me to Turkey. Or Italy. Or the Pavilion, where high art rules with comic grace. Let us all now worship at the altar of Gioachino Rossini…and thank Los Angeles Opera for doing him proud.