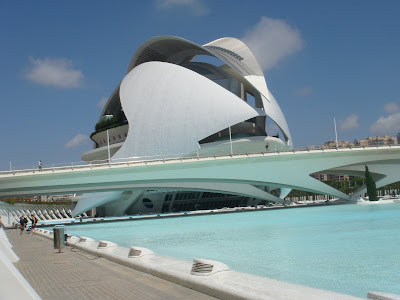 Who knew that Spain’s third largest city was the coolest hot spot on the Mediterranean. Truly, this seaside burg of some 800,000 folks located 185 miles South of Barcelona, is one of Europe’s best kept secrets. But blab about it I must, as I was truly overwhelmed by the people, the culture, the cuisine, the art, the architecture, and the sheer beauty of the city itself.

Vis a vis beauty, plazas are a good place to start (and because here in the States we have a dearth of them). So, after a harried arrival due to missing my connecting flight from New York to Valencia (from Los Angeles), and having to be rerouted through Paris only to arrive in Spain sans luggage (but who’s complaining…), I was, thankfully, part of a two-person junket with our own expert guides nearly every step of the journey. We began by taking in the octagonal bell tower, El Micalet at the Plaza de la Reine, also home to the splendid Valencia Cathedral.

Built on the site of a mosque and dedicated to the Virgin Mary, this mostly Gothic church houses a jaw-droppingly gorgeous alter, as well as important Renaissance frescoes and works by – who else but – El Greco and Goya. The big attraction, though, is the Holy Grail, claimed to be the chalice used by Christ at the Last Supper. Being a Jew, the religious significance is of far lesser importance to me than the epic quality of both the architecture and art. 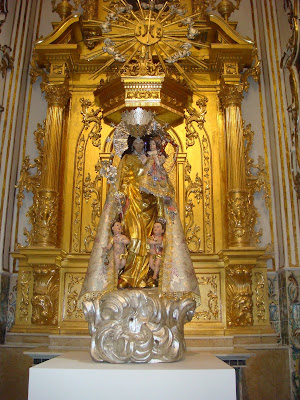 The ornate glories of Baroque art. Photo by Victoria Looseleaf

I also loved the adjacent El Carmen quarter, rife with bars and small restaurants, as well as those daytime social hubs known as horchaterias, including Horchateria Santa Catalina. There I had my first taste of Valencia’s signature sweet drink – horchata – hello – made from local tiger nuts. Grreat!

As for signature foodstuffs on a more haute level, the modern wave of Spanish cooking was actually spawned in Spain by the world’s most famous chef, the Catalan molecular gastronomist Ferran Adria. While his three-star Michelin boite in Rosas, namely El Bulli, is scheduled to close in 2012 (and has been notoriously impossible to secure a reservation, as if mere mortals can even afford it…), Adria’s vision of anchovies in foam, powdered oysters, black garlic ravioli, game meat canapés and the like, has migrated globally. This means that tiny tastes (tapas) can also be found on nearly every corner in Valencia. One particular corner included Riff, Bernd Knoller’s chic eatery, where tables are curtained off and Herr Knoller comes around to chat up the cuisine.

Also offering personable service is Casa Montana, located in the old fishermen’s quarter, where treats include fresh mussels and glorious sardines (my grandfather loved sardine sandwiches, can you believe, making my fondness for the real deal – not tinned – a genetic one). And as for Valencian paella, well, this town is the mother lode. Call me a turista loca, but I dig La Pepica, an eatery on the Playa de la Malvarrosa. Now run by the founder’s grandson (the restaurant opened in 1898, with its habitués including Ernest Hemingway and Orson Welles), the paella, definitely me gusta. Sit outside, gaze at the broad expanse of sandy beach and muse on the notion that Visigoths, Arabs and Romans also left their cultural imprint on this intriguing city. 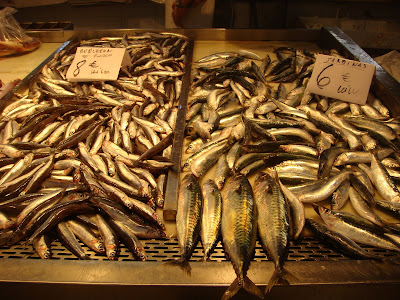 Sardines, brain food of the people. Photo by Victoria Looseleaf

Or don’t – muse on that – but keep drinking divine Spanish wines, before ducking into the 15th century Silk Exchange, which is adorned with lavish stonework, gargoyles and bawdy carvings. Also check out the Gothic buildings clustered around a walled courtyard across the street before heading into the Mercado Central. My idea of a Mercado –muy grande y fabuloso – it’s where locals shop for jamon, eels and, yes, Valencian oranges, all amazingly fresh and wonderful. And if you want a little aria with your artichokes, this is the market famous for opera singers bursting into song, notably excerpts from Verdi’s La Traviata.

But my ultimate fascination with Valencia – and what makes the hamlet simultaneously an old world and futuristic town – is the breathtaking new 86-acre City of Arts and Sciences. A culmination of 14 years’ work, most by native son, starchitect Santiago Calatrava, the edifices are a collection of white, organically contoured museums and theaters, including an eye-shaped planetarium, a science museum, botanical gardens and Europe’s largest marine park. And the crown jewel? The Palau de les Arts Reina Sofia, or the Calatrava Opera House. 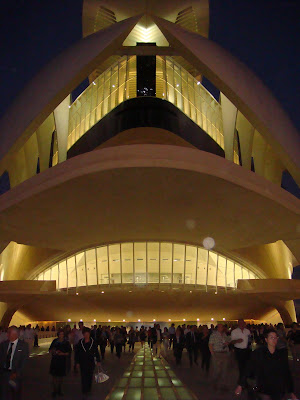 Moby Dick by night, as patrons emerge from the Calatrava Opera House. Photo by Victoria Looseleaf

Taking his cue from Valencia’s brilliant light (much like Van Gogh did from Arles), Calatrava fashioned white expanses and shimmering tiles as part of this surreal edifice that cost some 325 million Euros. Offsetting the cerulean sky and water, as well as mirroring nature with turquoise reflecting pools, the building also features a detached roof that seems to float like a feather in the balmy sea air.

Reigning supreme over the four acoustically marvelous theaters is the audacious artistic director Helga Schmidt, who has consistently programmed a cornucopia of forward-looking productions. Austrian-born Schmidt was the former artistic director of London’s Royal Opera House, and needless to say, she knows her way around the high art block. Indeed, Schmidt presented a Wagner Ring Cycle for the 21st Century (and Spain’s first), with staging by the avant-garde theater troupe La Fura dels Baus four years after the Moby Dick of a building opened in 2005. Schmidt, also a film fan, has attracted directing talents such as Milos Forman and Carlos Saura to build new audiences for opera. It also doesn’t hurt that classical music legend Lorin Maazel is the opera troupe’s music director and Zubin Mehta, whose 40-year affiliation with the Israel Philharmonic Orchestra is unprecedented, is its orchestra director. 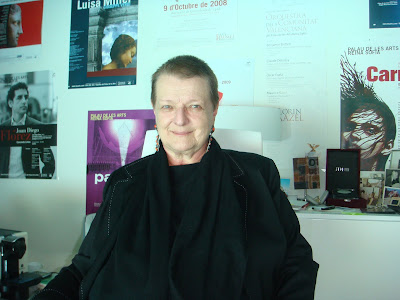 The 2010-2011 season features David McVicar’s new take on Aida and Vincent Patterson’s production of Manon. Angelenos may remember Patterson’s 2007 uber-stylish world premiere with Anna Netrebko and Rolando Villazon (the Mexican tenor, alas, has since had a series of vocal problems, culminating in a prolonged hiatus). Patterson, who’s worked with Madonna, among others, featured Netrebko assuming Hollywood personas from Marilyn Monroe and Audrey Hepburn to Leslie Caron. In other words: Operatic kitsch killed. In a good way.

Other intriguing offerings will include Robert Lepage’s production of 1984, composed in 2001 by Lorin Maazel, as well as recitals and concerts: Our own Placido Domingo sings zarzuelas with Virginia Tola; and the hot Peruvian wunder-tenor, Juan Diego Florez (he of the High C’s who brought back the encore tradition at the Met in 2007 when he re-warbled, Ah! mes amis, from Donizetti’s Daughter of the Regiment), will also be strutting his stuff. Then, come late May, Mehta heads the month-long Mediterranean Festival, with various operas and concerts, including Mahler’s Symphony No. 3, on tap. 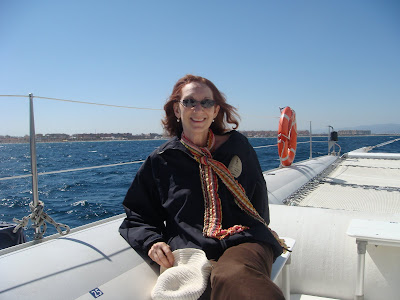 As for accommodations, take in the opera house from a fantastic 10th floor room at Hotel Barcelo, located across the way from the arts complex. You could even find yourself having a fashionable breakfast next to Maestro Mehta in the well-appointed dining room. Finally, with a large part of Valencia’s allure the sea (America’s Cup has recently been berthed there), nothing beats the five-star Las Arenas, where you can also catch a catamaran cruise under the moonlight. Emil Gergovski helms one of Mundo Marino’s spacious boats and serves a mean sangria. Viva Valencia!