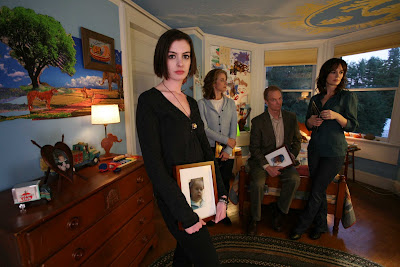 Although he overdoes the vérité (Another wedding speech? I kept thinking) and jerky camera shots, Jonathan Demme has created a small marvel with Rachel Getting Married. Succeeding where Noah Baumbach’s Margot at the Wedding did not—the movies share a rambling-house setting and affectionate but resentful sisters, one of whom has a barbed presence that throws off the cozy proceedings—Rachel centers on an extended family with a terrible past event that leaks into their every encounter. From a script by Jenny Lumet, daughter of director Sidney Lumet, it profits greatly from actors such as Bill Irwin, whose gamin quality occasionally sneaks out in his performance as the worried dad, the much-missed Debra Winger as the aloof mom, Rosemarie DeWitt as the bride swinging wildly between ecstasy and bitterness, and Anne Hathaway—far from her princess days—as Rachel’s sister, Kym, a drug addict on leave from rehab.

Hathaway, with her huge deer eyes and remarkable pillowy lips (when I got bored during The Devil Wears Prada, I would simply stare at them as I might a painting), gives herself over to the complex emotions of her character, who is self-absorbed to the point of being obnoxious yet sincere in her efforts to shake her addiction and deal with her guilt. She goes to 12-step meetings, hooks up with a fellow addict/wedding guest, smokes incessantly, pisses off her sister’s best friend, insists on being the maid of honor, wrecks her dad’s car, and seems to always feel the pull of her mother, though she is the furthest star in Kym’s universe.

Kym’s struggle takes place amid the nearly constant music of the wedding band members (everyone seems to be staying at the house and many characters appear to be in the music business)—when Kym irritatedly says of a violinist, Does he have to play all the time?, she echoed my own thoughts—and the color and whimsy of other preparations; as Rachel and their dad attach guest names to tiny ceramic animals, Kym learns that she is not at the family table. This is the kind of detail that is true vérité (sorry for the redundancy)—just when your sympathy is about to go with the beleaguered Rachel, who had to sit through a scarily disjointed all-about-me speech from Kym at her rehearsal dinner, she reveals her own capacity for cruelty.

Which is to say there are no heroes or villains in this film. Or resolutions. There is just, in high definition, the fullness of life, which includes both glittery Brazilian dancers and bruised black eyes.