Posted on January 29, 2012 by Victoria Looseleaf 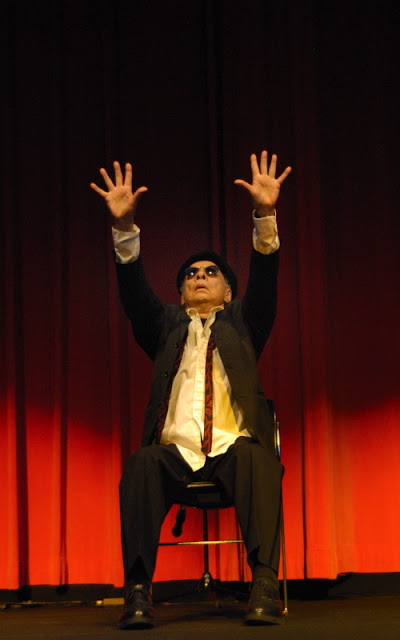 With only a few significant gestures – and several astute sartorial choices – this postmodern icon, at 82, is still able to seduce, as evidenced by the wildly applauding Angelenos who were out in force at the Hammer Museum’s Billy Wilder Theatre Thursday. Part of the ongoing exhibition, Pacific Standard Time: Art in L.A. 1945-1980 (click here for our musings on a related LACMA show), the concert, dubbed Walking Tall, featured Rudy Perez and a slew of other performers. Included were musicians, dancers and spoken word artists, many of them mentored by the octogenarian. But it was Perez’ 10-minute solo, download/overload, set to a deliciously scratchy but still emotionally wrenching 1936 recording of Kirsten Flagstad singing the Liebestod (from Wagner’s Tristan und Isolde), that proved most potent.

A New York transplant who’s called L.A. home for nearly 35 years*, Perez commands respect, devotion…and awe. (Click here to read our 2009 L.A. Times story on the choreographer; here for our Dance Magazine review of his troupe’s performance from that time; and here for our L.A. Times review, December, 2008.) Having recently received a Santa Monica Artist Fellowship Award to create a new work and catalogue his archives (currently housed at USC’s Special Collections/Archives), Perez also still teaches his weekly movement class.  But, as the aging body is every dancer’s bugaboo, so, too, has Perez been confronted with physical problems, including visual impairment and mobility issues, making this performance a triumph on numerous levels. 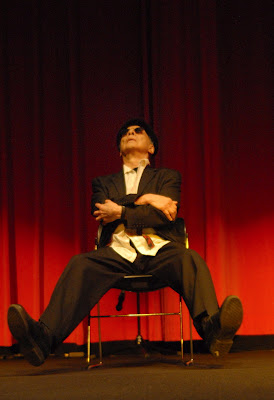 Seated on a chair during part of his solo – and wearing dark glasses throughout – Perez radiated fierceness, his gaze unflinching. Occasionally rotating his body slightly – thrusting a bent leg forward one moment, sideways the next – he would return facing front, arms crossed, legs splayed. Suddenly, as if possessed, Perez propelled his hands forward then upward, unassailable, a frozen pose, as if doing battle with the unseen. 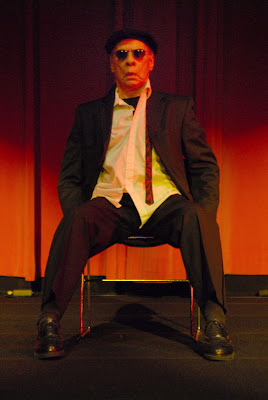 But whether struggling to keep a stronghold on the past or grappling with the relentless march of time, the moves are all written on his body, a language of the sublime, the pedestrian made profound: Perez stands, his crisp white shirt, un-tucked, slightly wrinkled, his thin red tie, a painterly splash of blood, now askew. ‘Remember me,’ he seems to be saying. ‘I’m here. Still. Now. Remember me.’ 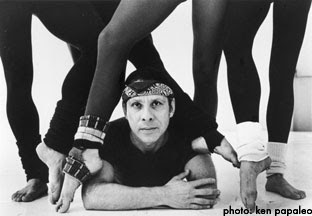 *For those unfamiliar with Perez, here’s an über mini-bio: After studying with the legendary Martha Graham in the ’50s (click here to read our 2011 L.A. Times review of the troupe), Perez became entrenched in New York’s experimental Judson Dance Theater. It was that school, founded in 1962 by David Gordon, Trisha Brown and others, that defined boundary-breaking “downtown” aesthetics, a vocabulary Perez has embedded deep in his DNA. (Rudy Perez performance photos: Irene Fertik)