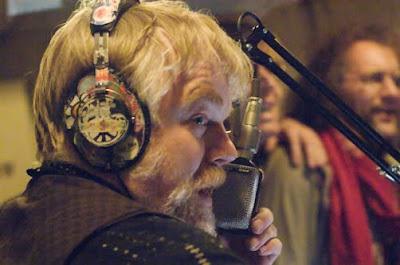 “The Count” (Philip Seymour Hoffman) bakes over the UK with rock ’n’ roll on his illegal late-night radio show.

Forget about the multiple intertwining plots: lovable longhaired outlaws vs. repressed government officials; DJ vs. DJ; boy’s search for father; boy meets girl, boy loses girl, boy gets girl back. Though occasionally affecting, they’re frequently clichéd, and they’re so all over the place, it’s as if writer/director Richard Curtis couldn’t decide what this movie was really about and didn’t have enough confidence in any one story line to stick with it. And though the acting ensemble—especially Philip Seymour Hoffman as The Count, Tom Sturridge as Young Carl, and Bill Nighy as Quentin—is wonderful, the best reason to see Pirate Radio is for the soundtrack, which is skillfully interwoven to reflect the various plot points. And, indeed, the energy and exuberance of the knockout opening sequence with Brits of all stripes dancing to the Kinks’ “All Day and All of the Night” as it blasts from the radio is hard to top. It’s rock ’n’ roll! It’s outta control!

What we have here is, perhaps, one of the best music videos ever made. Set on a pirate radio ship anchored off the coast of England in 1966, at the height of the British Pop phenomenon, when the BBC broadcast only two hours of rock per week, a wild and crazy crew of outlaw DJs and their helpers beam round the clock to a rock-starved nation such soon-to-be classics as “I Can See for Miles” and “My Generation” by The Who, “A Whiter Shade of Pale” by Procol Harum, “Sunny Afternoon” by The Kinks, “Sunshine Superman” by Donovan, “Jumpin’ Jack Flash” by The Stones, “For Your Love” by The Yardbirds, “Eleanor” by The Turtles, “This Guy’s in Love with You” by Herb Alpert and The Tijuana Brass, and a few dozen other songs of equally outstanding pedigree.

The soundtrack is so good you might not even notice the assorted anachronisms and the absurd absence of The Beatles. And—SPOILER ALERT!!!—you may even be willing to forgive an ending so Titanic-like, you’ll probably find yourself looking for Leo, Kate, and the iceberg. —RR