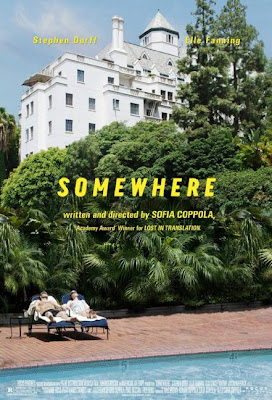 …but not in translation. Sofia Coppola is part of a celluloid dynasty. And while she, thankfully, gave up an acting career whose risibility climaxed in 1990’s The Godfather: Part III, directed by her father, Francis Ford Coppola, the neo-prodigal daughter does have a keen eye. 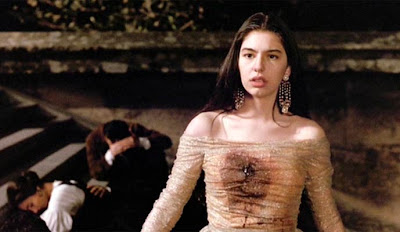 Death of an actor, Godfather-style.

And a fondness for luxe hotels. Coppola’s 2003 Oscar award-winning Lost in Translation, which I absolutely adored, featured Bill Murray in existential mode in a Tokyo high-rise; the Versailles of her Marie Antoinette was another kind of lodging animal, those pulsating pinks aside. With Somewhere, Coppola comes closer to home (though she was living in Paris when she wrote the flick), setting much of it at Hollywood’s Chateau Marmont, showcasing the hotel’s movie star trappings and attendant inanities, the stuff she knows so very well.

Lasering her focus on action star Johnny Marco, played by Stephen Dorff, whose career I must admit, I had never followed (nor do I plan to in future, unless he is, improbably, gonna morph into Javier Bardem), Coppola is fond of long tracking shots, twin pole-dancers (an amusing divertissement once, the second time the deadly earnest duo cavorts is overkill), and the ludicrous perks of celebritydom. All of this navel-gazing is prelude to Johnny renewing his relationship with his 11-year old daughter, Cleo (Elle Fanning, part of another, uh, theatrical dynasty, if you will). Which is, no doubt, the point: Johnny needs some meaning injected into his vapid lifestyle, cuz sex, drugs and sycophants aren’t cutting it for him. 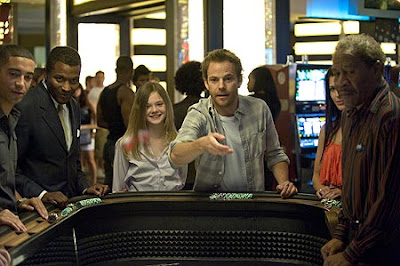 Ah, the joys of fatherhood: Teaching your 11-year old daughter Craps in Vegas.

But to quote the New Yorker’s David Denby: “It’s time Coppola risked losing her cool; it’s time she made something happen.” (A.O. Scott, writing in the New York Times, had a vastly different take, calling the film, “exquisite, melancholy and formally audacious” – whatever that means.) Alas, little does happen and we are left at the end with what we were given at the film’s outset – Johnny laying lots of rubber as he tools around in his oh-so-fabulous Ferrari.

Somewhere, beautifully shot by Harris Savides, is a trifle that would get little ink – not to mention Venice’s Golden Lion Award for Best Picture this year – were it not for its pedigree. Indeed, the opus, which has been rhapsodized to the point of being dubbed a tone poem (okay, I’m guilty of that…), reveals less about the narcissistic Hollywood personality than what we routinely get barraged with on TMZ, except Coppola’s vision has far better music. (The score is by Phoenix, the French rock band whose lead singer, Thomas Mars, happens to live with Coppola and is the father of their child: Nepotism lives, fersure.) 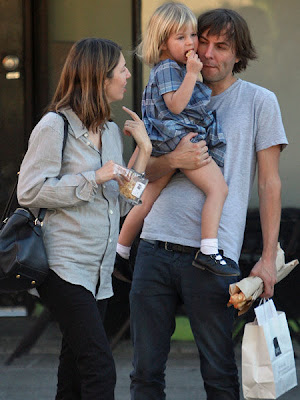 Keeping it all in the family, including the baguettes.

That said, however, c’est moi who is also part of the problem – I’m one of those fawning journalists who participated in a press junket at the Four Seasons Hotel, which Coppola, herself, adroitly tackles in the film. So here’s the result of those, er, mostly reverent press interviews – in this case, four mini-chats for KUSC-FM radio, two with Ms. Coppola and two with Mr. Dorff. 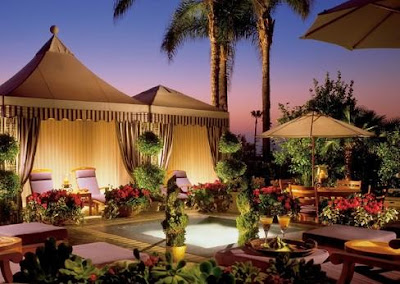 Life at the top – or at least on the terrace of the Four Seasons Hotel. Make mine a double, please.