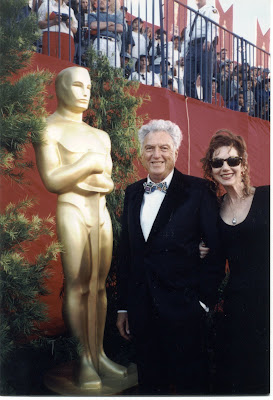 While we at The Looseleaf Report Blog are spewing our thoughts on Oscar season—be they rants, chants, whatthefuckever—I love the notion that the heat of an amazing election year seems to be surpassing all things Hollywood (and yeah, I’m thrilled to say, I’m on the Obamarama train; as to the botoxed Ms. Hillary, I only wish that I had $5 million to lend to myself). But from my perch in Tinseltown-adjacent, I feel that I, too, must weigh in, letting out a long, low Looseleaf howl on my picks and pans from the past year.

Daniel Day-Lewis, even though his five-year hiatus honing cobbler skills could have resulted in his surpassing stiletto king Manolo Blahnik, once again rules the thespian roost with his ridiculously brilliant portrayal of Daniel Plainview in Paul Thomas Anderson’s magnificent Let There Be Blood. I also bless him for dedicating his S.A.G. award to Heath Ledger (more on the Heathster in a bit). Kudos, as well, to P.T. He’s the son of “Ghoulardi,” a late-night horror host from my hometown, Cleveland (who unfortunately moved from that unfairly maligned town to the Valley of Los Angeles, where he spawned P.T. and where he also died), for making a film so hot, so visionary, and so, well, surreally real that it is a fabulous testament to the art of filmmaking.

I also am insane for the following: those fucking genius Coen brothers and Tim Burton (even if Johnny Depp’s Sweeney Todd crooning is more like Rex Harrison’s vocalese in My Fair Lady). Those robbed of nods include Ridley Scott (Denzel’s spot-on portrait of Frank Lucas in American Gangster is enough to make needlephobes of everyone) and Sidney Lumet. The latter, still going strong at 83 (much like Daddy, my longtime Oscar date, as witnessed by the above photo), manages to bring freshness to a familiar genre in the decidedly downer flick Before the Devil Knows You’re Dead. Which brings me to the amazing Philip Seymour Hoffman, who was nominated for the entirely wrong picture, Charlie Wilson’s War—and don’t get me started on Tom Hanks and Julia Roberts—instead of Devil, where he cavorts in all of his rotund nakedness with Marisa Tomei, also fabulously nude, but not when I bumped into her at Whole Paycheck, er, Foods: There she was, in sunglasses and sweats, hair casually pinned up in Hepburn—Audrey—mode, munching on a croissant and filling her cart with overpriced juices, veggies, and all too often bland-tasting foodstuffs.

And speaking of full frontal nudity, Viggo, Mr. Mortensen (a fan of The Looseleaf Report), takes the babka for his menacing turn in Eastern Promises. But as for Viggo snagging the golden statuette, let’s just paraphrase Brando’s glorious soliloquy in the cab ride scene in On The Waterfront and imagine the Vig bemoaning, “It ain’t my night.”

As for Juno, hey—remind me to be a stripper for a year (the pole thing is my forte, fersure), change my name (huh, again?), then pen a pic too hip for the room. Yeah, Ellen Page is fine, but Allison Janney needs to remain on the small screen along with that Law and Order guy, J.K. Simmons. Phooey!

I love George Clooney but still feel a bit miffed he wouldn’t dine with me and shooter Gary Leonard when we had our food column, “Out of the Frying Pan.” It ran for two years in the local rag The Studio City Sun and was the reason we scarfed free meals and downed a bunch of booze in a myriad of Valley restaurants, all in which the hunk ostensibly wined and dined as well. But he won’t win, so harrumph.

And lest we forget, Cate Blanchett was one of only two reasons to pay any moolah to see the abysmal, poorly titled I’m Not There, the Dylan disaster helmed by Todd Haynes. (Once again, The Looseleaf Report was way ahead of the curve—being one of the first to broadcast Haynes’s short film Superstar: The Karen Carpenter Story, totally enacted by, er, Barbie dolls). Cate, however, was phenomenal, which, for me, cancels out her histrionic Kate (Hepburn) in The Aviator, a performance that was, in my opinion, overrated and un-Oscarworthy.

The only other reason to spend 135 minutes with Haynes’s misguided vision? Heath Ledger—gloriously bare-assed, brooding, and seriously mumbling—and who, we just learned, died of a polypharmaceutical overdose, like Elvis, Marilyn, and numerous others, specifically friends from my checkered past. Their deaths, while more predictable, were still senseless and will never stop hurting.

As for the tox report, while not exactly a laundry list of fabulous highs, it’s still an odd one. Why would our boy take an over-the-counter sleep aid, Unisom, when he’s got Restoril (which is nothing compared to oldies like Tuinal or Seconal). Xanax is on every Hollywood A-list and while it’s true it doesn’t go well with Woodford Reserve Bourbon shots, it shouldn’t kill ya. Valium, again, is way old-school. Then we come to Hydrocodone (aka the eternally popular Vicodin), Oxycodone (the hillbilly opiate of choice, OxyContin), and Percocet (not nearly as good as its predecessor Percodan).

In other words: Quel fucking waste. TMZ may have been a tad slow on the uptake of this, but hopefully we can find closure, especially since Heath was laid to rest in Aussie soil over the weekend.

A final note: For you culture vultures, please check out my Los Angeles Times feature on the high priestess of fouettes, Diana Vishneva, and my program notes on the Los Angeles Master Chorale’s latest concert at Walt Disney Concert Hall. For those wishing to make an armchair visit to the Netherlands, check out my review of the Holland Dance Festival in Dance Magazine.

And remember: Yes. We. Can.