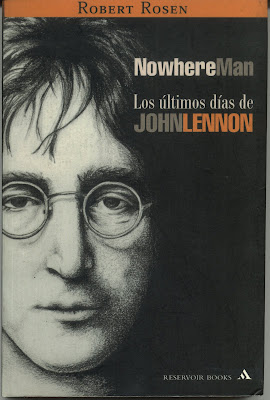 Cover of the first Spanish-language edition of Nowhere Man, 2003

This is my very personal list of the ten events, good and bad, of the past decade that have had the greatest impact upon my life.

1. August 2000: Nowhere Man: The Final Days of John Lennon is published. I wrote the bulk of the book in 1982, and for 18 years the “experts” told me it was unpublishable. It becomes a bestseller in five countries and three languages. My life changes and the book’s impact continues to be felt to this day.

2. September 11, 2001: Mary Lyn Maiscott and I live a mile from Ground Zero. The first plane flies directly over our house. We hear it crash into the North Tower but can’t see anything and have no idea what happened. We go back to work. Twenty minutes later I call my brother. “Aren’t you watching TV?” he asks. We go outside to watch the towers burn. Our building is evacuated because of a bomb threat. It’s a false alarm, but the terror is real. Twelve firemen from the firehouse across the street die at the World Trade Center. It’s a cosmically bad day.

3. October 19, 2001: I marry Mary Lyn in a civil ceremony at the Municipal Building in downtown Manhattan. The ceremony is broadcast live on The Louie Free Radio Show. Mary Lyn and I had been together for 11 years. What were we waiting for, a terrorist attack? In the midst of ongoing horror, it’s a very good day.

4. May-June 2002: Delayed honeymoon in Mallorca. We spend five of the most idyllic weeks of our lives in an 800-year-old stone house in the tiny mountain village of Fornalutx. Thank you, Terry Bisbee.

5. September 2002: Just as the paperback edition of Nowhere Man is published by Quick American Archives, I’m subpoenaed to testify as a witness for Yoko Ono in the copyright infringement suit she’s brought against my former writing partner Fred Seaman. After having been called a liar, and worse, by a variety of critics, journalists, and anonymous Internet posters, the trial gives me the opportunity to testify under oath, before the world media, that the story I told in Nowhere Man is true.

6. March 2003: Nowhere Man is published in Spanish in Mexico, and the articles and excerpts that appear over the next six months in virtually every major newspaper and magazine in the country are unlike anything that’s ever happened before. I am, in short, flabbergasted on an almost daily basis.

7. October-November 2003: On the eve of the publication of the second Spanish-language edition of Nowhere Man, I go to Mexico City to meet the press. I feel as if I’ve entered an alternate universe where everything I’ve been working for, for the past 25 years, has come to pass in a language I don’t understand. Thank you for being my voice, Ramón De La Cruz of Random House Mondadori.

9. October 2005: On the occasion of John Lennon’s 65th birthday, I’m invited to Mexico and Chile to talk about Nowhere Man. It is, more or less, a replay of the 2003 trip, with an additional country added. And again, I’m bowled over by the interest in the book, and the warmth and hospitality of the people. This time, however, I can speak a few words of Spanish, and I’m able to say things like “Yo soy la morsa” y “Sí, fumo mota.” Gracias a Roberto Ponce de Proceso y Javier Foxon de Paniko.

10. Late 2008-Early 2009: The economy collapses. Like everybody who had a 401K in the ’90’s, I swallowed the propaganda hook, line, and sinker: “If you want to have enough money to retire, you have to invest in mutual funds.” I come to the painful realization that if I’d have been better off if I’d stuffed my money in a mattress.