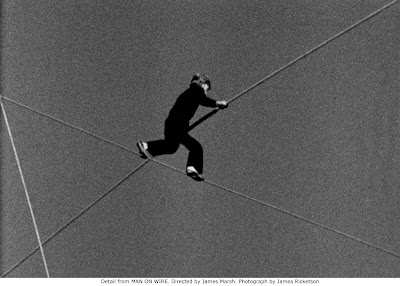 Man on Wire, a compelling and very funny documentary about Philippe Petit’s tightrope walk between the newly constructed Twin Towers of the World Trade Center, on August 7, 1974, never mentions what happened to those skyscrapers 27 years, one month, and four days later. This isn’t a criticism; it’s just a peculiarity—because it’s impossible in 2008 to watch this movie and not think about September 11, 2001, especially if you’re seeing it at the Tribeca Film Festival, an event that rose from the ashes of 9/11; especially if you live about a mile from Ground Zero and heard the first plane fly over your house and collide with the North Tower; and especially if for the next three months not a day passed when you didn’t smell the toxic fumes that wafted from wreckage.

And it’s impossible to watch Man on Wire through the perspective of nearly 34 years and not think that if somebody were foolhardy enough today to try the equivalent (if there is an equivalent) of what Petit did in that innocent and long-ago summer, the result would be a very different movie, something more akin to Harold and Kumar Escape from Guantanamo Bay—but without the comedy.

Petit and his crew of merry pranksters were French, for God’s sake, and after casing and photographing the joint, they, with help from a compatriot on the inside, posed at various times as workmen and journalists, and using counterfeit IDs and uniforms, smuggled into the WTC a thousand-pound metal cable, a bow and arrow, and other assorted goodies to commit an act that the Department of Homeland Security would now classify as conspiracy to commit terrorism.

In 2008 the perpetrators wouldn’t have made it to the elevator—forget the roof. How naïve the “tight” security of 1974 looks in this age of perpetual war.

And how amazing that in an age when everybody who owns a cell phone is an amateur videographer, there’s no video or film of Philippe Petit dancing in the clouds, suspended on a wire strung between the tallest buildings in the world. There are only still photographs.

But none of this really matters because Man on Wire is spellbinding from beginning to end. A combination of home movies shot in France in the 1970s, contemporary interviews with the now middle-aged conspirators, newsreel footage, stills, and re-creations (including a seemingly gratuitous scene where Petit, upon achieving instant celebrity, makes love to a groupie in her loft and then feels guilty that he betrayed his girlfriend), Man on Wire seems more like a flick about planning an impossible bank heist—the participants call it a “coup”—which gives the film a dramatic tension rarely found in documentaries.

The perpetually entertaining Petit, who’s also an expert pickpocket, had dreamed of walking across a tightrope strung between the Twin Towers since he was 17 and saw a drawing of the yet-to-be-built WTC in a magazine in his dentist’s office—a moment amusingly dramatized in one of those numerous re-creations. As he waits for the construction to be completed, he warms up for the great feat by performing two other “clandestine” walks—between the towers of the Notre Dame Cathedral in Paris, and the towers of Sydney Harbor Bridge in Australia.

The film then details the planning and training for the WTC walk, most of which takes place in Petit’s backyard in France—a military-style operation that looks as if it’s being conducted by the Marx Brothers (and Sisters). Some of Petit’s more memorable accomplices include his girlfriend, Annie Allix, whom he broke up with immediately after the walk; Barry Greenhouse, the mustachioed “inside man” who loaned Petit his ID so he could forge a few copies; David (aka Donald) Foreman, a New York musician whom Petit didn’t completely trust because, as Foreman says of the day he met the wire walker, “I smoked pot every day for 35 years; no reason to think I didn’t smoke it that day”; and Jean-Louis Blondeau, Petit’s oldest friend, who conceived of using a bow and arrow to string the cable between the two towers, and explains how he fooled the WTC security guards: “I put a lot of pens in my pocket. Americans carry a lot of pens, don’t they?”

My only regret about this film: the Petit Gang didn’t recruit me. I was most definitely available that summer. And I’d have joined them in the blink of an eye.