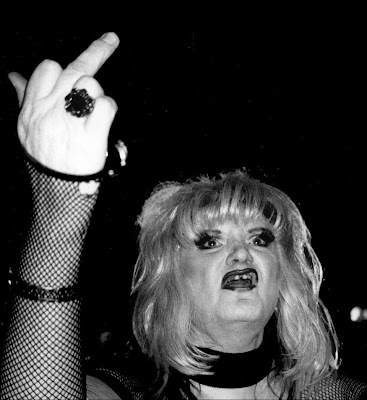 In the anything-goes atmosphere of the club party Squeezebox, glam-punk performer Jayne County expresses herself.

Sometimes in NYC you don’t know what’s happening in your own backyard (that is, if you had a backyard). I live within easy walking distance of Don Hill’s—and have even sung there, at the publication party in 2000 for my fellow blogger Robert Rosen’s book Nowhere Man—yet missed the phenomenon known as Squeezebox, a weekly gay night now lovingly immortalized in Zach Shaffer and Steve Saporito’s colorful, kinetic documentary. Running from 1994 to 2001, the glam/sleaze/drag rock ’n’ roll event provided a home for self-described misfits and propelled a few to fame, such as John Cameron Mitchell, who developed his character Hedwig (of Hedwig and the Angry Inch) on the Squeezebox stage (the house band’s Stephen Trask was Hedwig’s composer/lyricist). Aside from the amazingly raunchy actions that went down there (beer-bottle fucking on the bar, anyone?), the event shattered a music and lifestyle taboo: gays liking rock ’n’ roll. Instead of lip-synching Judy Garland numbers, drag queens would deliver kick-ass Led Zeppelin tunes and affecting weepers like “Love Hurts.” But more than that, this was a party that wouldn’t quit, despite Rudy Giuliani’s best efforts to crack down on the city’s nightlife (apparently a threat to our quality of life, which begs the question, what quality without nightlife?). Listening to Theo Kogan (the Lunachicks), Miss Guy (the Toilet Boys), Mistress Formika (the sylphlike MC with whom you would not want to mess), Lady Bunny (who, with her signature stratospheric wig, out-Partons Dolly Parton), and even the novelist Michael Cunningham (The Hours), you can only wish that you too had been taken to the bosom, prosthetic though it may have been, of the crazy slutty mama called Squeezebox. 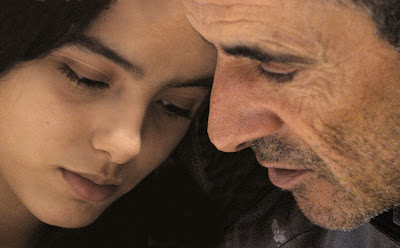 Rym (Hafsia Herzi) confers with surrogate dad Slimane (Habib Boufares) in The Secret of the Grain.

A dour, conscientious Tunisian immigrant named Slimane, only semi-employed in the shipyard of a French port town. His raucous extended family. Their overextended dinner conversations and tearful hysteria. Your own urge to shout, as you might with your own family members, Stop talking with your mouth full! And, Shut up already!

Perhaps any impatience with this boisterous crowd only attests to the realism of scenes that include a quickie on a tour boat (the plot hinges on Slimane’s son’s philandering ways), young parents discussing their problems with diapers and potty training, expressions of wonder at the fish couscous cooked up by Slimane’s ex-wife (though no one says, “What’s your secret?”), a bank officer taking her time at nixing Slimane’s dream of owning a riverboat restaurant, and a gyrating sequence that puts the “belly” in “belly dance.”

With a breakout performance by the beautiful and beautifully down-to-earth Hafsia Herzi, playing the daughter not of Slimane but of his girlfriend, yet perhaps the one most devoted to him. And with the memorable line: “Out of respect for you and the couscous…” Winner of Césars (French top honors) for best picture, best director, best original screenplay, and best female newcomer (for Herzi). 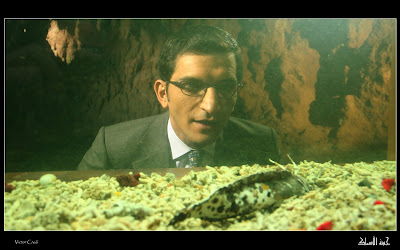 Insecure in his own Cairo habitat, Youssef (Amr Waked) contemplates that of some tropical fish in The Aquarium.

Voyeurism, secrecy, mortality, fear—there is much that the esteemed Egyptian director Yousry Nasrallah wants to explore in this film. And there is so much good in it—mainly, the basic story—that you wish he had excised the bad. The latter includes the actors’ suddenly talking directly to the audience about their characters—I may be a purist, but once someone gets me into their created world, I’d like to stay there for the duration—as well as imposed visual references to political oppression and avian flu. Nasrallah seems to think we occasionally need reminding, as we watch his tale, that the world involves scary things (America being one of them, by the way, a disturbing but not surprising perspective). He should instead trust more in our interest in his two leading characters—Youssef, an anesthesiologist who likes to listen to what his patients say as they’re drifting off, and Laila (Hend Sabri), the host of a radio late-night call-in show in which people talk mostly about sex—and how their lives intersect. That said, interest might deepen if Youssef, who does appear to care for his dying father and his abortion-clinic patients, were less of an emotional mystery. Whereas we discover that the red-lipsticked Laila is one hot tamale under those staid suits she wears, Youssef remains too much like the inhabitants of the public aquarium with which he’s obsessed—a cold fish.

The other night I caught a couple of Isabella Rossellini’s eight very short shorts, collectively called Green Porno, in which she plays bugs and other “tiny critters” in the process of mating. It’s a hoot to see a world-renowned beauty wearing costumes such as a child might create (although probably better-fitting). As a firefly, her ass lights up, she gleefully tells us while demonstrating, and as a snail she has a giant foot, which she squashes into her shell along with the rest of her, anus on top (yucky things ensue). These witty pieces are showing in pairs before selected films and all together before My Winnipeg; they’ll also be available starting May 5 on Helio mobile devices and on the Sundance Channel website. Rossellini will discuss the making of the series at the Apple Store in Soho on Tuesday, April 29, at 8:00 p.m.