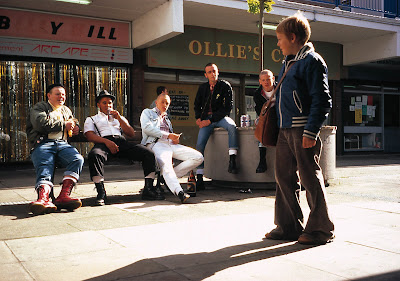 Despite the cross tattooed Charlie Manson-style in the middle of his forehead, for a gentleman who’s just gotten out of prison he seems like a decent enough chap. And he’s quite the orator, too. Combo (for that is his name) is telling an amusing story to his rapt audience at a small gathering of friends—something about a bloke stealing his “puddin’” in the joint, I think, his anecdote liberally sprinkled with fookin’ this and oi that. (His Scouse accent—at least I believe it’s a Scouse accent—is a little difficult to understand, and the occasional subtitle would not be out of place here.) The real problem with this Combo chap, however, is that to feel completely positive about him you have to overlook his rather dramatic entrance. Apparently, he’d instructed his mate, a fellow skinhead, to barge into the party and, pretending to be a neighbor displeased by the loud music, indicate that he was about to hack everybody to death with the machete he was wielding like a ninja gone bonkers. It’s not until Combo, played with menacing verisimilitude by Stephen Graham, waltzes in and announces that oi, it’s just a bleedin’ joke, lads, that we realize this party is not about to devolve into a total helter-skelter bloodbath. I’m still laughing.

What we have here is not the bucolic Britain on display in the 2007 “English Garden” calendar that hangs on my kitchen wall, its pages a seductive riot of “Red Georgette” tulips and blue forget-me-nots set against a background of green in all its glorious shades. It is, rather, the Britain of Shane Meadows’ stunning and brutal film This Is England, which is so different from the one I see every morning in my calendar, it may as well exist on a different planet.

Let’s call the planet “July 1983,” which is the date flashed on the screen following a rousing opening montage—set to the music of Toots and the Maytals—of every iconic image that was England at the time. And though the credits later say that the film was shot in Nottingham and Grimsby, which are about 50 miles apart, the setting is a generic East Midlands city gone to seed—a fictional town, based on Meadows’ experiences growing up in the area. You’ve got your blocks of council flats, some inhabited, some abandoned ruins; you’ve got your vacant lots, your bleakly unappealing beach, your “Maggie-is-a-twat”-style anti-Thatcher graffiti scrawled on various bits of concrete, and your young people dressed like Boy George and Cyndi Lauper, listening to the songs that pour from the radios, like “Come On Eileen” and “Tainted Love.”

Oh yeah, then there’s the kid, the star of the show. Shaun (Thomas Turgoose, making his acting debut) is 12 years old, lives with his mother, Cynthia (Jo Hartley), and he’s got issues. Primarily, he’s being picked on at school, cruelly taunted by the older kids about his father, who was killed in the Falklands war the previous year. Shaun will, without hesitation, go berserk on anybody who insults his dad—and he doesn’t give a flyin’ fook how big they are. His violent outbursts, however, tend to land him in the headmaster’s office, and in one memorable scene he coolly waits his turn for corporal punishment while listening to the screams of the kid he was fighting with as the headmaster beats him with a cane. Shaun, in short, is fearless.

The characters’ emotional complexity, as portrayed by a stellar ensemble of mostly unknown actors, is what makes this film extraordinary, one of the best to come out of England in a long time. The plot itself is simple—it revolves around Shaun’s relationship with two local cliques. First, he falls in with some stylish, semi-enlightened skinheads, apparently descendants of the Mods, who are led by Woody (Joe Gilgun), an appealing and articulate young man who takes pity on Shaun and invites him to hang out with his gang. They transform him into a miniature version of themselves, teaching him how to dress, buying him new clothes, and shaving his head, which freaks out his mother. But Cynthia understands that Shaun needs a father figure, and all she asks of Woody and the gang is that if Shaun is going to hang out with them, then they must take responsibility for him, and to please ask her permission before they shave his head again.

There’s genuine affection between Shaun and the skinheads; they even invite him to their parties. One of them, the Lauper-esque Smell (Rosamund Hanson), who’s about 19 and wears braces, takes a fancy to Shaun, and they become, essentially, an item.

“You might look like a baby, but you kiss like you’re 40 years old,” Smell tells him, later asking, “Why don’t you want to suck my tits? Don’t you like me?” Shaun says that he likes her just fine, but he hasn’t had a lot of tit-sucking experience and is a little nervous about it. Though essential to understanding the characters, this is a perfect example of the type of “taboo” material that’s so rarely seen in American films, and one of the reasons that This Is England has such an exotic feel to it.

It’s after Woody’s old mate Combo returns from prison, and begins to dominate the picture with sheer force of personality, that Shaun drifts over to the neo-Nazi skinheads. The crucial moment comes when Combo—furious with the Pakistanis and West Indians who he says are taking over England—delivers an eloquently fascist speech, which he begins by asking the one black man in the group, Milky (Andrew Shim) if he’s English or Jamaican. The moment is ominous, Combo’s propensity for violence always lurking just beneath the surface.

“Good man,” says Combo, switching to a critique of the government’s stupidity in waging the Falklands war—at which point Shaun physically attacks him. This provokes Combo to declare that Shaun’s the only one in the group with any guts, and that he sees himself in Shaun at the same age.

Combo becomes Shaun’s new father figure, and along with the gang of neo-Nazis, they rob and trash Pakistani-owned liquor stores, harass Muslim kids playing soccer, and go to National Front political meetings—until it all culminates in an inevitable bit of completely insane Clockwork Orange-like ultra-violence.

It’s shocking, it’s horrible, it’s bloody, and it reminds you that, even though July 1983 was a long time ago, it’s still a lot closer than you might want to believe.