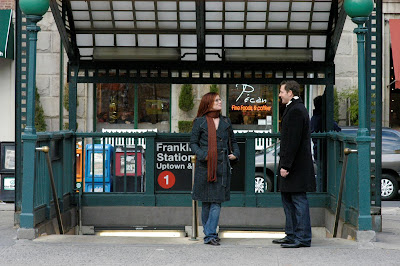 “Pulp and popcorn and the same old crap.” This is Brian Callahan (Patrick Wilson), author of several popular detective novels and one unpopular “literary” novel, talking about what people seem to want from writers and other artists. Fortunately, those things are not what Edward Burns gives us (well, maybe a little of the popcorn) in his lovely new film, Purple Violets. Burns has taken the LIRR from Brothers-McMullen Long Island to Woody-Allen Manhattan, a land of cozy Soho restaurants, charming Village streets, and expensive big lofts, with the occasional foray into the Hamptons. (As in Allen’s films, you never believe anyone has financial concerns, even when he or she is supposed to.)

Patti Petalson (flower theme?), played by Selma Blair, has writer’s block, a lousy boss (in a real estate office), and a lousy marriage. But her luck changes when Brian, her college love, drops into one of those nice restaurants—kind of an ex-boyfriend ex machina—where she’s dining with her best friend, Kate (an acerbic Debra Messing). Of course, Patti has that pesky husband, the British Chazz (Donal Logue, who’s not afraid to be odious), and Brian has a girlfriend (Elizabeth Reaser)—even though she, a much younger indie-label A&R person, thinks he’s hopelessly square. He also has to explain to her that The Great Gatsby isn’t a band, but Burns has the confidence and knowingness not to hit us over the head with too many literary allusions just because two characters are writers (unlike the publishing-world movie Suburban Girl, and oh yeah, Patti, like that other movie’s female lead, reads while walking, but in her case it’s only from the bus stop to the door). Rounding out the main foursome is Burns himself, nicely portraying “the Murph,” Brian’s lawyer and best friend and Kate’s former beau, whom she has never forgiven for an indiscretion during those often-referred-to college days.

Blair has the right touch for Patti; she’s darkly beautiful but in a low-key, contained, slightly mysterious way (and I’m hereby bestowing on her the first Frances-McDormand-in-Laurel-Canyon-Small-Breasts-Are-Sexy Award). When Brian says that Patti is more talented than he is, we believe him, because she seems to have more reserves within her than he does (this could partly be due to Wilson’s all-American, Pat Boone looks, very effective in Little Children). Messing’s bitter, funny Kate is a good foil for her, as is Burns’s urban-good-ole-boy Murphy, who stalks Kate into letting him apologize for that long-ago dalliance.

In the parlance of cliché, Patti needs to find herself, and that she’s able to do so in a way that does not invoke the same old crap, but instead is intelligent and even somehow restorative (to the audience, I mean), is a blessing. With Woody in London (director-wise), it’s good to have Ed Burns in New York.