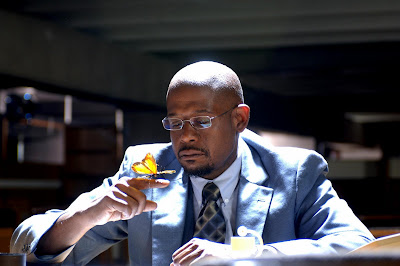 In a segment called “Happiness,” Forest Whitaker contemplates the delicacy—and power?—of a butterfly.

No sooner had I watched Sarah Michelle Gellar extract herself from the tender hands of Alec Baldwin in Suburban Girl than I witnessed her tumbling into the rough (metaphorically speaking) hands of Andy Garcia in The Air I Breathe, in which Garcia plays an elegantly dressed gangster whose nickname “Fingers” refers to his tendency to separate digits from the bodies of debtors. His cruel ways set into motion a series of events that only become clear once we’ve seen all four stories of people whose lives interconnect (partly through a car accident, in the way of Amores Perros and 21 Grams).

The titles of the four stories are “Happiness,” “Pleasure,” “Sorrow,” and “Love”; according to notes on the film, these emotions refer to a Chinese proverb that calls them the cornerstones of life. But since a butterfly theme keeps popping up, audience members might instead latch onto the idea of the “butterfly effect”—the theory that the mere flapping of lepidopteran wings can cause a ripple in the atmosphere that eventually leads to something huge, like a tornado.

In this movie, when a bored and boring stockbroker portrayed by Forest Whitaker decides to get crazy and bet his all and then some on a horse (named Butterfly, of course), he triggers a tornado that won’t quit—usually taking the form of mayhem, which is why my eyes were shut for a lot of the film (this is also the way I watch, or don’t watch, The Sopranos). Whitaker’s carpe diem actions apparently bring him happiness, but there’s a twist to its source, as there is in the next segment to Brendan Fraser’s pleasure and, finally, to Kevin Bacon’s love.

More straightforward is the sorrow of Gellar, who plays an unstable singer traumatized early in life (another car accident—these people should watch where they’re going). This may be no surprise to Buffy fans (I never saw the show), but Gellar has range. I fully believed her terror while under the thumb (no worries: she keeps her own) of Fingers—however improbably; it’s as though John Gotti were the manager of Britney Spears and no one blinked. Gellar’s pop princess goes by the name Trista (obviously a play on triste, the word for “sad” in both French and Spanish) and, in a climactic moment, reveals her closely held real name to Fraser’s sensitive, psychic thug (but not to us, making it a tad non-climactic).

The other main characters do not appear to have names but are listed in the credits as the emotions they embody; thus Fraser is “Pleasure,” and the actor playing him as a teenager is even identified as “Young Pleasure” (aha! perhaps Trista’s real name is Sorrow). As signaled early on by the exciting, pulsing opening music, this is not a subtle movie—its color, sometimes grainy, sometimes dark, often looks ugly and feels assaultive. But Fraser and Gellar’s jump-started relationship does have an exquisite quality, rooted in urgency and mysticism. Can he save her (sadly, Fingers is no vampire, so she can’t do it herself)? Or how about that other fellow from whom she’s separated by only two degrees?

The Air I Breathe