If Kerouac Were an Illiterate Argentine Sculptor 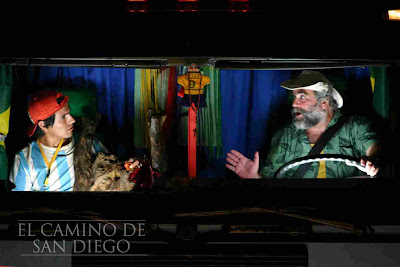 Tati (Ignacio Benítez), left, with his root sculpture, and Waguinho (Carlos Wagner La Bella) on the road to Buenos Aires.

Who is this Diego Maradona? As far as I can tell, he’s a retired soccer player, the Argentinean Pelé, a permanent fixture in the gossip columns, a cross between Che Guevara, John Lennon, Elvis, and Babe Ruth, a man loved and worshipped in his homeland but despised in every other soccer-playing country, particularly in Latin America. When I was in Chile a few years ago, people were still talking with mucho gusto about Maradona’s cocaine addiction, his rehab, his weight gain, and his heart attack, which is the real-life incident that puts the plot of this poignant comedy into motion.

In the idiot-parlance of Hollywood pitchspeak, The Road to St. Diego is Heart Beat (the 1980 film about Jack Kerouac) meets The Motorcycle Diaries meets the Virgin of Guadalupe, which, as far as I know, is Jesus’ mother, not a movie.

Tati Benítez, played to perfection by Ignacio Benítez, is the man who goes on the road in Argentina. Who is he? Let me put it this way: If he were an American, he wouldn’t be Jack Kerouac; he’d be Mark David Chapman—an obsessive fan stalking his idol, determined to murder him in cold blood (with a legally purchased handgun, no doubt) and steal his fame.

Happily, Tati is not American; he’s an illiterate Argentine from the backwoods whose inherent sweetness shines through in the charming way he’s always saying gracias to everybody. Tati has lost his job as a lumberjack, and has taken to carving sculptures out of tree roots and selling them to tourists to support his wife (Paola Rotela) and three kids. He’s also Maradona’s #1 fan: he has Maradona’s number 10 tattooed on his back; he’s taught his pet parrots to call Maradona’s name; he spends 50 pesos of his very limited funds on an autographed picture of Maradona; and he wants to name one of his girls Diego, but the authorities won’t let him because it’s not a girl’s name.

The film begins as a mockumentary—everybody in town tells their stories about Tati, mocking his passion for Maradona. They tell him that his autographed photo is a fake. “You probably bought it from a Brazilian,” someone says.

One day as he’s walking in the woods, Tati sees a tree root that looks like Maradona raising his arms in triumph after scoring a goal. He cuts it off, takes it home, polishes it, and carves number 10 on its back. He considers it miraculous, like finding the face of Jesus. Did he find it just “because,” he wonders? Or is it a sign from God? He decides to donate his sculpture to a soccer museum. But when he hears that Maradona has had a heart attack and is in the intensive care unit of a Buenos Aires hospital, he changes his mind. Despite the very reasonable objections of his put-upon wife—We don’t have enough money, she tells him—he says that he’s going to Buenos Aires to give the statue to Maradona himself. It is his destiny.

Encouraged by a psychic reading, Tati, his statue wrapped in plastic, hits the road. He takes busses. He hitchhikes. He meets people. They ask to see the statue and he shows it to them. Some ridicule it. Others think it’s a great likeness.

But only when he gets a ride from Waguinho (Carlos Wagner La Bella), a garrulous Brazilian truck driver carrying a load of live chickens, does it begin to appear that the statue may, indeed, have miraculous powers. The first miracle: Waguinho—who’s known as “The Bear” to the numerous prostitutes he frequents—initially isn’t going to take Tati with him because, like all Brazilian soccer fans, he hates Maradona. But then he decides he likes Tati and takes him anyway, despite the statue—and he’s going all the way to Buenos Aires.

It’s after Tati turns down a shopkeeper’s offer to buy the statue for 300 pesos and a couple of salamis because Maradona brings him good luck (he settles for a picture of himself with Tati and the statue) that Waguinho begins to believe in the statue’s powers. A spiritual man—he’s deeply impressed by his aunt’s ability to talk to the dead—Waguinho kisses the statue as if it’s a religious icon.

But it’s miracle #2, the saving of the cargo of 50,000 chickens, that makes Waguinho a true believer. A crowd of striking workers have closed a bridge and won’t let him pass. “But my chickens will die and I’ll lose my job,” he tells them. He then negotiates with the strike leader, telling him of the statue. The strike leader says that only the workers can vote on whether or not to open the bridge. Tati shows his statue to the mob of workers, Argentineans and soccer fans all. They cheer wildly and agree to open the bridge. The chickens are saved.

Greater miracles, encounters with whores and blind men, as well as a happy ending are still to come, of course. Ultimately, though, The Road to St. Diego serves as yet another reminder—and the Tribeca Film Festival is full of them—that some of the best movies being made today are coming from outside the U.S.A., especially Latin America.

There’s a scene towards the end that may give Americans pause, though that’s clearly not the intention of director and screenwriter Carlos Sorin. Maradona has left the hospital, and hundreds of fans have gathered outside his Buenos Aires estate to get a look at him and to give him gifts. The scene, however, is eerily reminiscent of the way fans used to gather at the Dakota when John Lennon was alive. And when Tati asks the guard at the gate if he can give his statue to Maradona, it may make you think of a scene in another film making its U.S. debut at Tribeca—The Killing of John Lennon.

But, happily, it’s not America, it’s Argentina, and fans there, no matter how obsessive, are not in the habit of carrying handguns.