Gustavo Goes Hollywood & Then Some 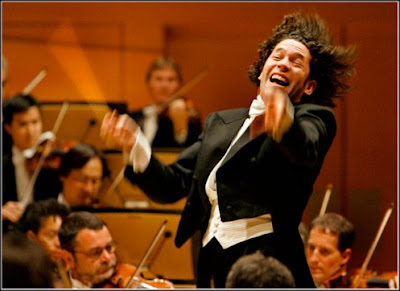 
Could there be anything better than being in the audience at Walt Disney Concert Hall listening to an all-Tchaikovsky program performed by the illustrious Los Angeles Philharmonic, conducted by ours truly, the Dude himself, Gustavo Dudamel? If there is, please let The Leaf know, as the March 13 concert had it going on. Oh, yeah! 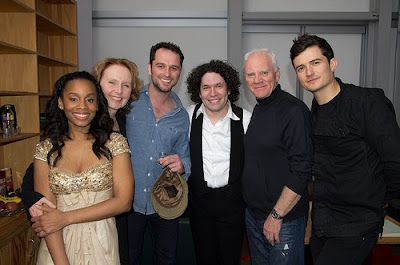 Continuing its live telecasting to more than 400 movie theaters around the country in its second camera-ready appearance, the Phil was abetted by some Tinseltown thespians reciting snippets of Shakespeare – all around the hall, no less – to a trio of Tchaikovsky scores. Exuding megastar wattage, Orlando Bloom was Romeo, leaping about with more agility than, well, Spider-Man. Assaying Juliet was Anika Noni Rose. Commanding the organ loft: Malcolm McDowell as Prospero from The Tempest (but who can ever forget him as the thug Alex in A Clockwork Orange). He also took a turn as the Ghost of Hamlet’s father, with weak link Matthew Rhys’ tortured to-be-or-not-to-be titular character strutting in front of first-row patrons. 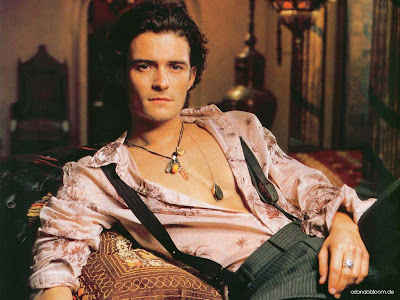 Kate Burton directed the actors, but pulling it all together musically was Dudamel and his merry band of virtuosi. Beginning with the 1888 Hamlet Fantasy-Overture, the Dude rocked with riches from his sensuous strings until the horns signaled the entrance of the Ghost. McDowell has presence to burn (and looked dashing in a long black neo-Edwardian coat). The plaintive oboe solo signaling Ophelia, all sweetly sad in B-minor, was also delicious. Then with the Tempest Symphonic Fantasia (1873), came the evocation of the sea: twenty minutes of lush romantic melodies, not to mention a vivid brass fanfare, roiling, indeed, surging with tympani. 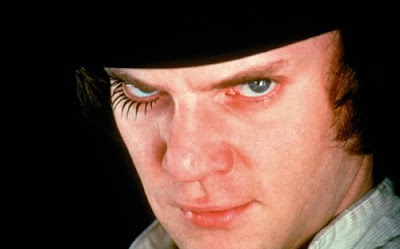 The intermissionless concert roared to a conclusion with the thrilling tone poem on Shakespeare’s Romeo and Juliet. The harp sang, the cymbals clanged and doomed love soared (again in B-minor), excizing the familiar melody from staples of late night infomercials and turning it into sheer heaven. The genius of Dudamel, then, is to make the old new again. Fresh. Rapturous. Sparkling. A sonic orgasm, if you will.

The following week, the pianist was to have been Martha Argerich. But, as is her wont, she cancelled at the last minute (blaming back problems), with the Phil bringing in Jeremy Denk, a wonderful keyboardist and, well, long-time blogger. What took so long? Denk was an absolute revelation in Beethoven’s First Piano Concerto, letting trills emanate from his fingers as if from God. The cadenza (Beethoven had actually written three for this 1798 C-major work), was electrifying, and as the music continued, Dudamel let loose in his usual potent manner: big, bold, beautiful strokes of lovingly wrought melodies filled the hall like so many Champagne bubbles. When Denk returned to the stage for his second bow, he then graced us with an encore from Charles Ives. Unmitigated bliss. 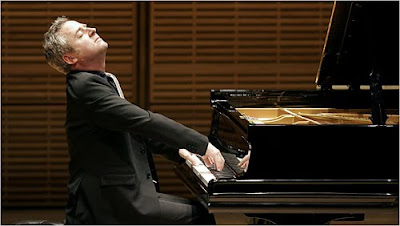 Jeremy Denk doing what he does best.

The concert, which had begun with Mozart’s Masonic Funeral Music, closed with his 1782 Symphony No. 35 (Haffner). Talk about jubilation! Everything about the work sang, from its gallivanting principal motif to its dancing scales. With a minuet of gentle friskiness moving to the dazzling finale, this was Mozart as it was meant to be played – and heard – a simply delectable 20 minutes not soon to be forgotten.

P.S. As of this post, the Dude and his gorgeous wife, Eloísa Maturén, are one day away from having a baby. And how does The Leaf know the precise due date? She had the pleasure of meeting Ms. Maturén, a former dancer, backstage at the Pavilion after the final performance of Nederlands Dans Theater. (Click here for my post which links to my L.A. Times story and my KUSC radio interview with NDT’s artistic director, Jim Vincent). The lovely mother-to-be added that she was having a boy who will be named Martín Dudamel Maturén. Mazel tov to the glittering couple and, again, to the Los Angeles Philharmonic for helping bring the best music to lucky Angelenos. 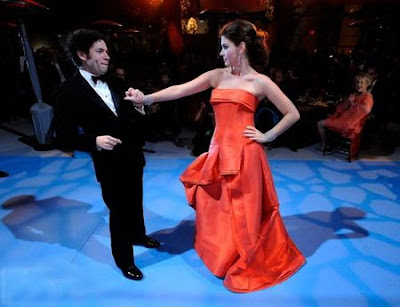