What They Are: Edie Brickell Introduces the Gaddabouts 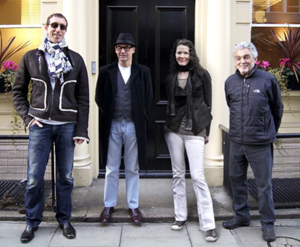 Rhymin’ Simon seemed almost at a loss for words to express how he felt about the performance his wife, Edie Brickell, had just given as the frontwoman for the new band the Gaddabouts. “It’s so great to see her in this kind of venue”—Zankel Hall, part of Carnegie Hall—“and with such great musicians,” he told me and Robert Rosen on Friday night, as your TLR correspondents mixed with the crowd congratulating Edie and the rest of the band in a hallway near the 599-seat theater.

In January, Brickell—who has recorded only sporadically since marrying Paul Simon in 1992 (they have three children together)—released two CDs: The Gaddabouts, from which most of Friday’s set list was drawn, and Edie Brickell, with a different band. At that time I did a phone interview with her for vanityfair.com, but I hadn’t yet met her. As I waited after the sold-out concert for a chance to introduce myself, I watched a middle-aged woman put out her hand to Edie and say, “Hi, I’m Larry Linden from Dallas, Texas.” “Hi,” Edie said graciously, taking her hand. A little later Edie introduced the woman to me as “my mom”—“She was just jokin’ with me before,” Edie explained. (Yes, her mom’s name is Larry.)

The 45-year-old Brickell, still sharp-cheekboned and thin (she wore skinny jeans and a billowy salmon-colored top onstage), is endearingly unaffected. “I was so nervous about playin’ guitar,” she confessed to the audience at one point. “Could y’all see that?” During the set she occasionally strummed an electric guitar while seated, supplementing the flashier playing of Andy Fairweather Low—who had a tendency to shout out minor complaints, almost as though he had a form of Tourette’s (“This is in B-flat?!”). It was that kind of a show, WFUV-sponsored, intimate, casual. The hefty fellow sitting next to me slapped out a song’s rhythm on his thighs; once in a while someone let out a whoop or a loud comment. And at the end we all sang a specially written birthday song to Steve Gadd, drummer and founder of the band—bassist Pino Palladino is its fourth member—following lyrics written on cardboard and tooting noisemakers for emphasis. “I am beyond grateful to Steve,” Edie told us, “because he got me recording again.”

For his part, Gadd informed us that songs were just “pouring out” of Brickell; indeed, some of them, such as “Good Day,” she wrote the same day they were recorded (“I had a train ride into the city where I could puzzle out” the lyrics, she’d said during the interview, as though that explained such speed-writing). Contributing to the easy atmosphere, the songs were more pleasant than exciting—none matched “What I Am,” Brickell’s breakout hit (with the New Bohemians), in intensity and originality—but they’re a good fit for her voice, with its Norah Jones-ish velvety-ness and a hint of grit beneath. My favorites were “Never So Far Away,” about saying goodbye (“so long, sugar”) to someone who’s nonetheless always close; “My Heart, My Head,” done tango-style with accordion; and “Gonna Hold On,” a bluesy number she said she wrote “for my gorgeous husband.” And that would be? Oh yeah.