Posted on October 25, 2013 by Victoria Looseleaf 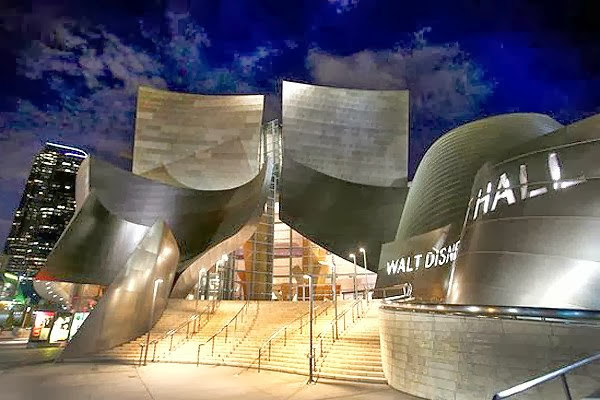 Talk about culture vultures! We have been on a roll for the last month or so, but did want to check in on our homegalz site. Where to begin. Well, the 10th Anniversary of the opening of Walt Disney Concert Hall seems like a great place to start. We had an absolute blast (and have loved just about every single concert/event we’ve been to since the Hall’s opening on October 23, 2003).

But back to the evening of September 30, which began with The Dude conducting John Cage’s notorious 4’33” – without a score (hahaha…) – and continued with Yo-Yo Ma playing Bach and Tchaikovsky. The LA Phil sounded incredible in These Premises Are Alarmed, by the always edgy British composer Thomas Adès. We also loved Mahler’s Rondo from his Symphony No. 9 and the Maestoso from Camille Saint-Saëns’ Symphony No. 3, aka, The Organ, with the Hall’s magnificent instrument sounding mighty, fersure. 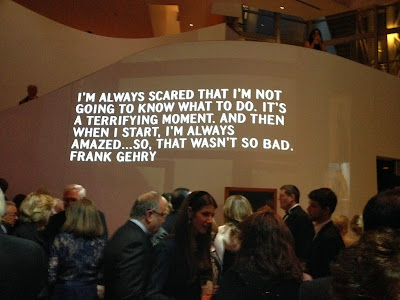 But the night was really a tribute to Frank Gehry (below), with his quotes sprinkled liberally throughout the hall and his voice heard during several of Netia Jones’ fabulous video installations. 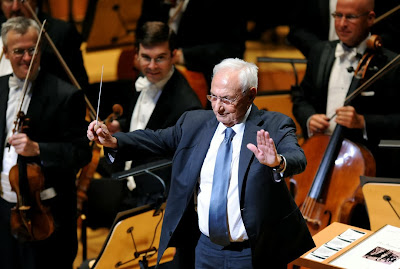 On the actual date, October 23, conductor laureate, Esa-Pekka Salonen (below), led the Phil, the L.A. Master Chorale and a cast of actors and singers in the world premiere of Frank Zappa’s 200 Motels. 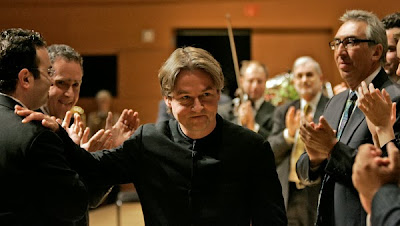 It was absolutely raucous, raunchy and rich. Indeed if Dali, Arp and others of the Surrealism/Dada movements had composed music, it might have sounded like Zappa’s.

To read all about how the Hall came to be, click here for our KCET Artbound story and let us know what you think. 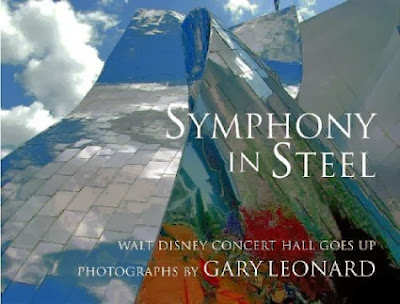 And re the story: We tried to get photos from our erstwhile colleague, Gary Leonard (we worked together for eight years at the Downtown News – this before much was happening down there), and wrote the forward to his book, Symphony in Steel: Walt Disney Concert Hall Goes Up. But Gary, the Weegee of Los Angeles, true to form, said he couldn’t possibly find any of those shots in his enormous archives. 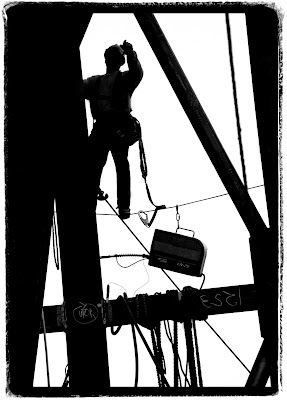 Apologies, then, to Mr. Leonard, as we then turned to erstwhile D.A. Gil Garcetti, who began a second career as a photographer after losing the O.J. trial, etc. Thus, at some point after 2000, when he was out of office and the Hall was finally rising, Garcetti was granted access to the Gehry edifice. Our story features an interview with Gil and some of his now iconic pictures (one such photo at right), especially of the fabulous men otherwise known as Ironworkers (not to be confused with Robert Downey Jr.’s cinematic persona, not that we ever saw any one of those, er, films…).

To keep this short, then, we’re just gonna say, enjoy the story and – to quote one of our favorite operatic heroines, the doomed Tosca, Vissi d’arte.