Jew on a Camel 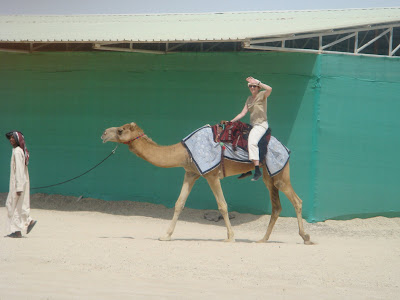 By Victoria Looseleaf (we shortened it from ‘Looseleafkowitz’)

After much ballyhooing and back-and-forthing between a battery of New York publicists and this ink-stained wretch, it came to pass that I was able to both celebrate my father’s 84th birthday in West Palm Beach and then jet onward to Abu Dhabi, the richest city in the world. There I would be reporting on the Fifth Annual Abu Dhabi Music and Arts Festival for KUSC-FM radio, my debut for the station as an international arts journalist.

What is not covered in my Middle Eastern radio musings—but will be part of my book, Dance, Drink, Whatever…One Woman’s Pursuit of Art and Pleasure Around the Globe—I thought I’d give brief mention here.

Arriving in Abu Dhabi (taking planes to D.C., Doha—the capital of Qatar—followed by a puddle jumper to Abu), was a feat in itself, and at the stroke of midnight in a godforsaken Persian Gulf airport, I was met by a sweet driver who promptly took me to the wrong hotel.

After getting our bearings straight (and believe me, nothing is straight when it comes to the Emirates or the Emiratis, for that matter, save for the millions of dollars’ worth of oil gushing by the minute from beneath their sandy soils), I made it to the Millennium. In spite of my jet lag, I was immediately struck by the parade of high-end hookers and hooch available on the premises. As both prostitution and alcohol are forbidden in Islamic culture, I realized I’d arrived in the land of the apocalyptically hypocritical.

This is not meant to be a screed against the UAE, but merely an observation. Admittedly, the Arab society is a closed one, and certainly not one I was able to penetrate in a mere 10 days, this non-penetration thing rampant on other counts, as well, but nothing I’ll, er, get into here.

What I did want, though, was a bottle of booze for my room. Having been told I could buy alcohol at a grocery store, early the next morning I proceeded through the late March, 90-degree heat and was led to a counter with alcohol.

Too bad it was rubbing alcohol.

The soukhs—marketplaces where rugs, gold, spices and other kinds of Middle Eastern exotica were sold in days of yore—also proved non-existent. It’s all malls now, all the time, the bigger the better—with the insane amounts of construction taking place ruining the environment (and the region allegedly running out of concrete).

But not running out of camels. Wanting to see the legendary camel races, including a 5 million Durham dromedary, I beseeched my Egyptian driver, Wa-El, to take me to the outskirts of town for a little Lawrence of Arabia action. But arriving at 11 a.m., we were privy only to the camels in cool-down mode.

Alas, the races were over, but, after some multi-culti confabbing, I was invited to ride one. With a lot of help from the help, I took to the hump, this Jew on a camel hanging on for dear life.

And loved it. As I loved much about the Middle East. In fact, I plan on returning for next year’s festival—should there be one—as well as to explore the real desert, far from Abu Dhabi, Dubai and the cigarette-smoking, cell-phone toting locals dressed in abayas and designer shades, driving Hummers and Mercedes on gridlocked highways, the a/c cranked up in the blazing mid-day sun, as they make their way to prayer.

This entry was posted in Abu Dhabi Music and Arts Festival, Dubai, Durham, KUSC, Lawrence of Arabia. Bookmark the permalink.