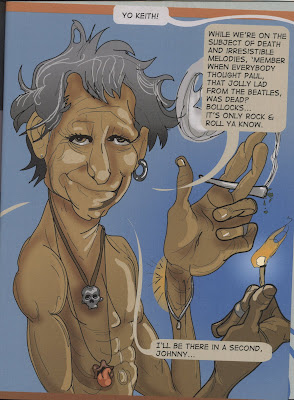 A sample of the artwork from The 27s. Rolling Stone Keith Richards is not a member of “the 27 Club,” but his former bandmate Brian Jones is a charter member.

The 27s: The Greatest Myth of Rock & Roll is an ambitious book with an identity crisis.

What manner of tome is this? That’s the question.

Could it be a coffee-table book? The slick artwork, glossy paper, and quality printing all indicate that this might have been the intention of its “creators,” Eric Segalstad and John Hunter. But it’s really a trade paperback that lacks the size and heft of a genuine coffee-table book. And though Segalstad and Hunter discuss in detail the numerous musicians—like Jimi Hendrix, Janis Joplin, Jim Morrison, Kurt Cobain, Brian Jones—who died at age 27, it’s not exactly about them, either. The book is filled with so much general rock history that “the 27 Club,” as it’s known, often gets lost in the background.

More important, to call this 27 Club “the greatest myth” of rock ’n’ roll is simply not true. It may be the most morbid myth, but it’s barely in the same arena as the holy trinity of Elvis/Beatles/Dylan, none of whom died at 27.

The 27s is a well-researched rock ’n’ roll overview that would work best as a reference book if it only had a table of contents and an index, and was divided into chapters. But with these essential elements missing, it can’t be called a reference book. It’s just a book that goes on for 310 pages. You can’t find anything in it. And even if you happen to stumble upon what you’re looking for, key bits of information may be missing. Take my John Lennon bio, Nowhere Man, for example. I heard it was mentioned in The 27s. And it’s true, in a way; there’s a reference on page 283: “Author Robert Rosen writes that after Lennon discovered Cheiro’s Book of Numbers…” But it doesn’t say where I wrote it. It doesn’t give the title of my book. Nor does the title appear in the bibliography, and that sort of thing is as unprofessional as the numerous proofreading mistakes throughout—the kind of mistakes a good copy editor/proofreader (one is credited) should have pointed out.

I think that writers and artists who have the wherewithal and courage to form a company to publish, distribute, and promote their own book, as Segalstad and Hunter have done, are to be commended. But The 27s serves as a good example of the many things that can go wrong with such a venture. It is, ultimately, a book that cries out for the guidance of a professional editor who could have helped shape and focus their very intriguing concept.

This entry was posted in 27 Club, Eric Segalstad, John Hunter, The 27s: The Greatest Myth of Rock and Roll. Bookmark the permalink.