The Way They Are 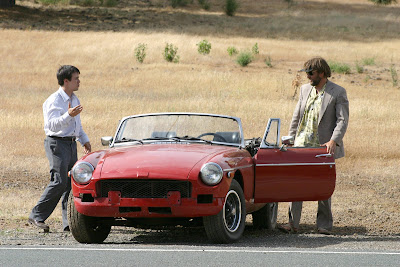 Within the first 20 minutes or so of Sherman’s Way, I got tired of counting the stock characters: primarily, a young, uptight aspiring lawyer, named Sherman (who you instantly know will become downloose by the closing credits); his controlling, successful parent (in this case the mother, played icily by theater stalwart Donna Murphy); and the wacky catalyst for his undoing, a hirsute 40ish guy named Palmer (who may or may not be a former Olympian skier who lost the gold for the USA). As the film was also turning into a rather silly road-trip-cum-buddy movie—cool red roadster notwithstanding—I was almost outta there, but my fellow blogger Bob Rosen suggested we stay with it, apparently intuiting a gleam ahead. And he was right. The gleam came into view around the time that Sherman, having impulsively run off to sunny California (from grey New York, indicating New York is staid like Sherman?) to surprise his disenchanted girlfriend with his new impulsiveness, lands in the eccentric yet idyllic—in that movie way—indoor-outdoor lakeside pad, somewhere near Napa Valley, of Palmer’s friend D.J. (“I want to live there!” I said to Bob, who replied, “It’s a trailer!”)

Though falling into many clichés, this movie has enough quirks and surprises (particularly when it comes to the inevitable reunion of Palmer and his estranged son) to make it an enjoyable light, and occasionally touching, comedy. Sherman, played by the boyish Michael Shulman, learns a few practical and emotional truths from crazy Palmer (James LeGros, of Ally McBeal, nearly unrecognizable under all that hair) and resourceful D.J. (Enrico Colantoni, of Just Shoot Me [something tells me these sitcom backgrounds came in handy]), though their arrogant, placid knowingness when dealing with the rich, inept—but sweet—Sherman is at times infuriating. And of course by the end of the film Sherman has helped the self-destructive Palmer inch toward maturity.

He has also, as if one odd couple were not enough, hooked up with yet another flaky partner, the babelicious, skinny-dipping Addy (Brooke Nevin). Apparently, that is Sherman’s way.