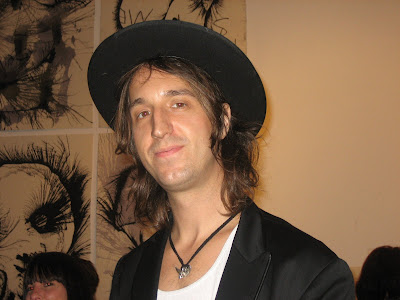 “MOMAR is finite. It is not an ongoing concern. Its building and its organization will disappear.” Along with other tenets (“MOMAR answers the eternal question ‘What Is Art?’ with another question: ‘what isn’t?’”), this was part of the mission statement of the Museum of Modern Arthur, founded by Joseph Arthur, a painter and poet but best known as a singer/songwriter. His new CD, Temporary People, with his band the Lonely Astronauts, comes out September 30th.

Because of a dispute with the landlord involving an art installation that includes a mattress, a mannequin head, and shower plumbing, MOMAR is indeed about to disappear. But not without a party, held last Thursday night in the gallery’s space at the end of the earth—Brooklyn’s earth, Dumbo’s earth, Jay Street’s earth. Walk down another half-block and you can put your face against a metal fence marked “The End” and watch the ships glide by, with Manhattan twinkling across the East River’s brown choppy waters.

Or you can just watch from the industrial-metal steps of MOMAR—as I did, with fellow blogger Bob Rosen, letting the wind whip my summer-dressed self into autumn on this rainy, chilly night.

But inside it was warm, T. Rex was playing on the boom box, and impossibly chic-in-that-Williamsburg-way young people were drinking wine, beer, and instant margaritas amid Arthur’s Rorschach-y, amoeba-y, spidery, E.T.-y paintings. (Perhaps his mentor Peter Gabriel describes them better: “They seem to connect to Expressionism, Art Brut, Basquiat and the Graffiti movement.”) Studying my favorite of the works—a set of nine (one piece unceremoniously fell off the wall, prompting a woman in very high sandals to scale a ladder and tape it back up)—was the dancer Michelle Mola, to whom I was drawn by her DKNY-but-looks-like-vintage coat (my first glimpse of her was when the very tall Arthur lifted the very small Mola way off her feet in greeting). Mola, she told me, sometimes performs with Arthur but was delicately kicked off the stage when, dressed as Cupid (it was Valentine’s Day), she attempted to dance along when Arthur made an appearance on The Late Show with David Letterman: “They kept saying, ‘Would the dancer move downstage,’ ‘Would the dancer move further downstage,’ and then, ‘Would the dancer exit the stage.’” 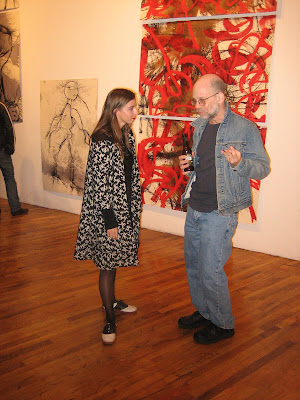 The question of the night was whether Arthur, whom I wrote about for Vanity Fair’s blog last May, was going to perform (with or without Mola)—and whether he’d do so on the aforementioned mattress, since there was no stage to be seen. Wandering around in a black felt hat and black jacket, he seemed, perhaps taking a cue from his paintings, to be more into just hanging. (For someone who comes across as very laid-back, Jo, as his friends call him, is remarkably productive—check out his website.) That’s what he was doing—sitting on the steps outside with a friend, hat still perched on his long, Romantic-poet hair—when Bob and I left the party, still going strong.

Up the street, we stopped to look at a homemade shrine, featuring a photo of a Chihuahua, attached to the wall of a converted factory. “Are you interested in Chicken?” asked a woman in a black trench coat who suddenly appeared out of the darkness. She explained that she’d rescued the dog, named Chicken, and that he’d been beloved in the neighborhood, but that he’d been hit by a car crossing the street to their building. (Without meaning to, I had the sad thought, Why did the Chicken cross the road?) She stopped to fix a few of the shrine’s tchotchkes—a tiny Ganesh statue, a tiny blue bowl, a tiny duck—before going inside.

This made Dumbo seem like a small, sweet town but also somehow like Oz, with not a yellow-brick road but a cobblestone one, and with a wizardly glowing place of art at the end of the line, about to disappear. 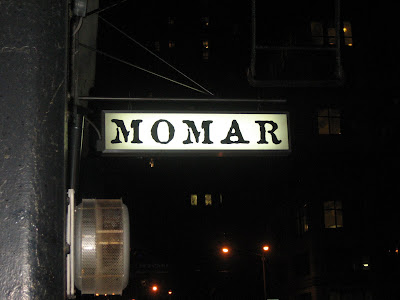