Reconciliation Is Not an Option 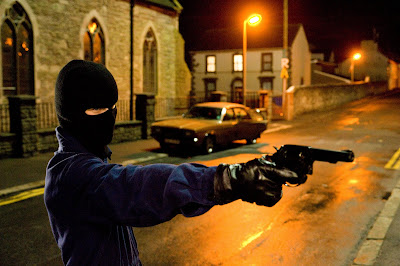 Sixteen-year-old Alistair Little, of the Ulster Volunteer Force, prepares to murder a Catholic.

Sometimes, it’s just not possible to bring together two people whose historical animosity runs deep, and allow them to discuss their differences in a controlled setting, as was done, for example, at the White House “Beer Summit.” Sometimes, the injuries are too personal, the wounds too raw. Sometimes, a better understanding cannot be reached—because there’s nothing more to understand, and the damage is undoable. Sometimes, revenge (served cold) is the only answer.

At least that’s the way it plays out when an Irish “reality” TV show arranges for Alistair Little (Liam Neeson), a Protestant former member of the Ulster Volunteer Force, to meet with Joe Griffin (James Nesbitt). Thirty years earlier, in Northern Ireland, Griffin witnessed Little’s assassination of his older brother, Jim (Gerard Jordan), for the crime of being Catholic—an act his mother (Paula McFetridge) held Joe responsible for. “Why didn’t you do something?” she screams at him in heart breaking despair.

Reconciliation is not an option in Five Minutes of Heaven, a title that should not be confused with the kissing game “Seven Minutes in Heaven.” Griffin most definitely does not want to kiss Little. Rather, he wants to plunge a knife into his heart with the TV cameras running. That’s the only reason Griffin has agreed to the meeting—the notion of the media trying to exploit his tragedy for ratings and drama disgusts him.

Five Minutes of Heaven—based on a true story and shot on location in Northern Ireland—is a physically and emotionally brutal movie. That brutality becomes clear in the opening minutes, as documentary footage of “the Troubles,” as they’re euphemistically known, shows the aftermath of various bombings, including one shot of a man whose legs have been blown off, crawling away from the site of the explosion.

It’s also a film filled with wrenching performances and almost unbearable tension. The sequence leading up to the killing of Jim Griffin is so detailed and realistic, it’s hard to watch. The camera follows Little, 16 at the time, and played by Mark Davison, as he prepares to murder his 19-year-old neighbor—so he can be somebody important, so he can walk into the local bar and have the men applaud his great achievement.

We see Little in his bedroom, dressing, digging out his gun, loading it, and then meeting up with his equally young accomplices. Meanwhile, in a nearby part of this gritty town, Joe Griffin (Kevin O’Neill), then 11, kicks a soccer ball against the wall outside his apartment as his brother sits in the living room and his parents get ready to go out.

The film then cuts to the present, where the adult Little and Griffin are traveling in separate limousines to the luxurious Belfast estate where the TV show featuring their highly anticipated rendezvous will be filmed. Little, cool behind his shades, is resigned to doing what he feels he must do. Three decades after the murder, including 12 years spent in prison, he realizes that his motivation for the horrendous act is no different than that of a Muslim suicide bomber. Griffin, nervous and having second thoughts about going through with it, tells his driver to pull over to the side of the road so he can have a smoke.

Anamaria Marinca, who plays Vika, a production assistant who immigrated to Belfast from Vladivostok, creates an especially appealing character. We get to know her as she prepares Griffin for the filming of the show and as they stand on a terrace of the manor house, smoking cigarettes. When Griffin tells her that he thinks Little is a celebrity who turned the murder of his brother into a lucrative TV career and is now leading the “life of Riley,” Vika sets him straight. Little, she says, is a “broken man.” She knows, she says, because she visited him at his home. Griffin goes so far as to tell Vika that he’s planning to kill Little. Why she doesn’t mention this to her bosses is hard to say. But it’s during this conversation that we learn the meaning of the movie’s title: “five minutes of heaven” is what Griffin says murdering Little will bring him.

Though the disparate elements of this sad and powerful film never completely jell as it flashes back and forth between past and present—one reason is that young Joe Griffin doesn’t quite look like the person who will grow into the adult Joe Griffin—the pace never lags, and the story is never anything but gripping, even with a clichéd ending that’s less than believable.