Saks and the City 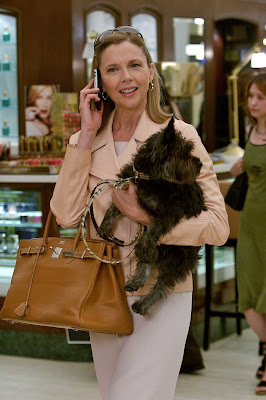 There was a moment when I thought The Women, a remake of the famous 1939 George Cukor movie, was going to lose me, philosophically anyway. A high-powered female (everyone in the movie is female, as in the original) New York magazine editor, up against the wall, considers making revenge the theme of her upcoming issue, a sort of how-to-get-yours for readers (also, presumably, all female). It’s always bothered me that revenge is usually viewed in film and TV as something very satisfying, something we should all vicariously exult in, instead of the negative, shallow, hurtful response it really is.

And indeed Sylvie (Annette Bening), the editor, is hardly ready to send roses to Crystal (Eva Mendes), the Saks perfume-spritzer who’s fooling around with the husband of Mary (Meg Ryan), a sweet homebody who is Sylvie’s best friend. Sylvie even advises Mary, though rather gently, to “kick her ass” when they come upon the curvaceous Crystal in the dressing rooms of a lingerie boutique. That Mary fails abysmally at this—while trying on an ill-fitting white bustier, garters dangling over her dowdy long skirt—is part of her charm.

Again and again the movie seems about to lapse into movie-chick clichés but then rebounds, and often quite entertainingly. I wish that a scene in which Mary’s mother (Murphy Brown—I mean, Candice Bergen) is recovering from plastic surgery did not, despite her bruised face, seem like an endorsement of the procedure, which Mary takes as a given in her own future (a bit ironic, considering Meg Ryan’s obviously worked-on face—what’s with those lips?).

And Mary and Sylvie’s other friends—Alex (Jada Pinkett Smith), a steely lesbian writer, and Edie (Debra Messing), a hippie-esque earth mother—lack dimension, though Edie’s Upper West Side apartment doesn’t; it sprawls unendingly, and she mentions that her husband has just acquired his own space in the building as well. The other home we see—Mary’s Connecticut mansion—is also huge. As in so many Woody Allen movies, money doesn’t seem to be an issue. Indeed, The Women follows in the Manolo Blahnik footsteps of Sex and the City in touting high-end consumption, here mainly in Saks Fifth Avenue, depicted as a wonderland of sorts (though also the locale of Mary’s rude awakening). I was also a little disappointed that Mary gets chic-ified once she finds herself (with a little help from the always-welcome Bette Midler, prancing around as a Sue Mengers–type superagent) at a spa, even if she is a designer.

Still, as she did with the TV show Murphy Brown years ago, writer/director/producer Diane English, with this 14-year labor of love, brings women to the foreground—or in this case, the foreground, ground, and background—and then gives them plenty of clever things to say as they reach beyond mere revenge. These particular women ultimately reject clawing as a way to the top, or a way to hold on to a man, though they keep the Jungle Red polish. I think Norma Shearer would be proud, though I’m not sure about Joan Crawford.