Posted on November 7, 2011 by Victoria Looseleaf 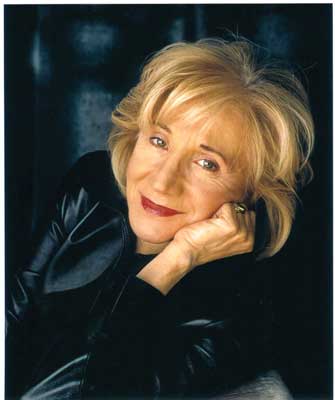 Although she’s only got about 12 lines in the two-character play, Vigil, Olympia Dukakis is riveting. Like a silent screen actress, she telegraphs an array of emotions – frustration, sadness, horror, glee, surprise –  when listening, responding to and/or dealing with Kemp, a self-involved, middle-aged man played with panache by Marco Barricelli in Morris Panych’s two-act work (in photo below, by Craig Schwartz). 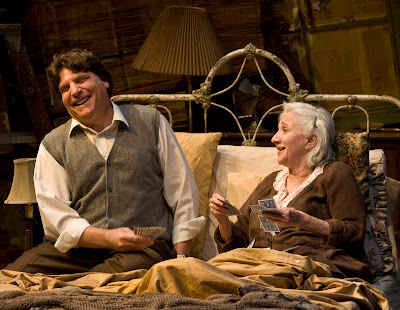 Onstage at the Mark Taper Forum through December 18, the play has Kemp turning up at Grace’s bedside –having not had any communication with her for 30 years – after receiving a letter that she’s dying. Full-blown gallows humor prevails, with deep ruminations on family, identity, and the human condition also center stage.

Dukakis, now 80, is acting gold. Sure, we want her to speak so we can hear that throaty, marvelous voice, but we’ll take her any way we can. And watching her prance about like Charlie Chaplin one moment, looking tipsy, albeit in bed, blowing a New Year’s Eve noisemaker the next, is an absolute delight. Barricelli, powering the show with mountains of dialogue, is also up to thespian snuff. Indeed, he and Dukakis have worked together numerous times (they did Vigil in San Francisco last year), and are the consummate odd couple, “volleying,” as the San Francisco Chronicle wrote, “like tennis masters.” 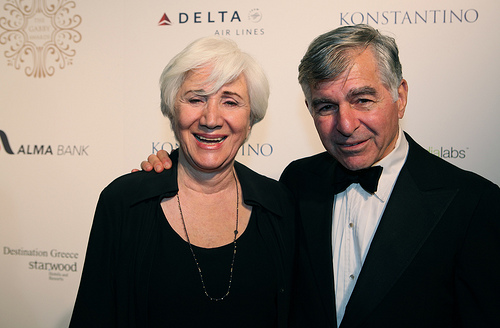 For those unfamiliar with Dukakis (could that even be possible?), she’s racked up numerous credits and awards, including winning an Oscar for Best Supporting Actress – at age 56 – in 1987 for Norman Jewison’s Moonstruck, playing Cher’s mother, Rose Castorini. (Cher snagged the gold statuette for Best Actress, while Olympia, upon copping the Oscar, gave a shout-out to her cousin, Michael Dukakis, in photo above, who was running for President that year.) She also had a fabulous turn as Clairee Belcher in Steel Magnolias, a 1989 film directed by Herb Ross that featured a stellar ensemble, including Julia Roberts (not our favorite, but, whaddya gonna do…), Dolly Parton, Sally Field and Shirley MacLaine. (Click  here for more on the fabulous MacLaine, who receives the AFI Lifetime Achievement Award next June.)

Then there was Dukakis’ memorable portrayal of transsexual landlady, Anna Madrigal, in the TV miniseries, Tales of The City. Based on Armistead Maupin’s 1970’s newspaper serial, Tales debuted in 1993 and was followed by sequels in 1998 and 2001. One of Ms. Madrigal’s unforgettable lines, “I have no objection to anything,” could also define Dukakis’ feisty personality. 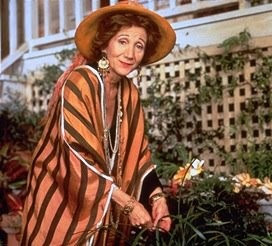 This year, 2011, has been a particularly fertile one for the octogenerian. In January she starred in Tennessee Williams’ 1963 play, The Milk Train Doesn’t Stop Here Anymore in an Off Broadway revival for the Roundabout Theater Company. She’s also got a Harold and Maude-like storyline with Zach Galifianakis on Bored To Death for three episodes this season, eps that are nothing less than hilariously brilliant. 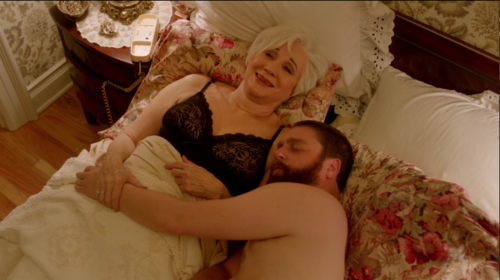 With no plans to slow down, Dukakis is even going to Cypress in January to perform another play – in Greek, no less. We’re thrilled to have chatted with her about this and other aspects of her life and career for KUSC, 91.5. Click here to hear Dukakis, in her own words. And go see Vigil. You’ll laugh, you’ll cry – and you’ll also be privy to experiencing one of the great actors of our time. And, hey – Barricelli’s fantastic, too.