Posted on December 22, 2015 by Victoria Looseleaf 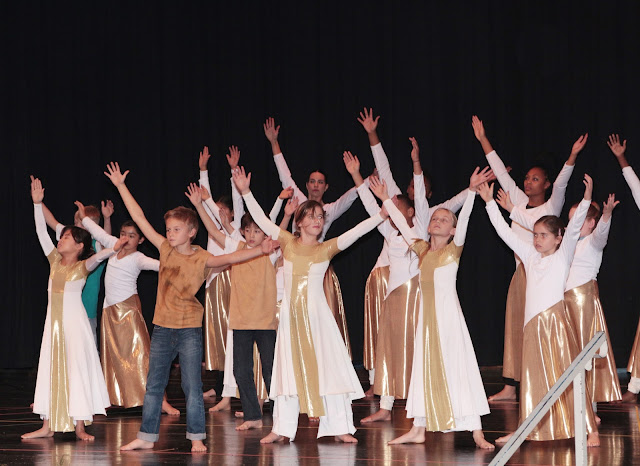 Choreographer and dancer, Alvin Ailey, who founded Alvin Ailey American Dance Theater in 1958 and created his masterpiece, Revelations, two years later, died in 1989. But his company – and the iconic work that has been seen by more than 23 million people in 71 countries across six continents – lives on. Indeed, even a postage stamp containing an image from the opening sequence, with dancers’ arms outstretched, was issued in 2004.

A dance evoking land and water, Revelations (photo below), is a journey through African-American spiritual music and, for dancers, an act of devotion for the generations that came before. It has rarely been performed outside of the Ailey companies (the younger, Ailey II, tours regularly, also ending most programs with Revelations). 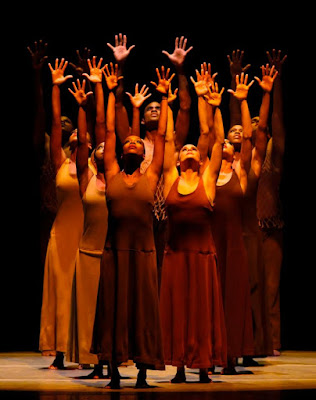 But on a recent night in Santa Monica, 130 children from Seven Arrows Elementary School – yes, kids ranging in age from five to 12, in addition to four students from Sheenway School and Culture Center – performed one of the most popular modern dance pieces of all time.

The work is told in three sections —Pilgrim of Sorrow, Take Me to the Water and Move, Members, Move — and is considered to be Ailey’s exploration of sadness and joy. That these children were able to convey such emotions through their faces and bodies – and execute some nifty footwork in the process – was nothing less than astonishing.

The driving force behind staging Revelations for the school’s Winter Festival was Elsa Chahin, Director of Dance at Seven Arrows and a former professional dancer. Chahin invited master choreographer Alejandra Llorente, from Mexico City, to help with this unique and loving adaptation. 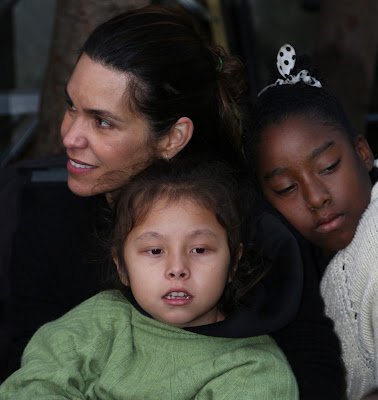 Explained Chahin (photo at right with two Sheenway students): “I want to expose kids to the reality of life and not just do a little ‘Nutcracker.’ I want this dance to stay with them and that the students be transformed. And because I have 18 students per grade, I wanted to incorporate all the students.”

Seven Arrows, in Pacific Palisades, is a small, private school founded in 1999 by Margarita Pagliai, Head of School (photo below). The core mission is to teach and promote passion for learning, academic excellence, and a commitment to local and global communities, with several of the school’s alumni currently in Ivy League colleges. 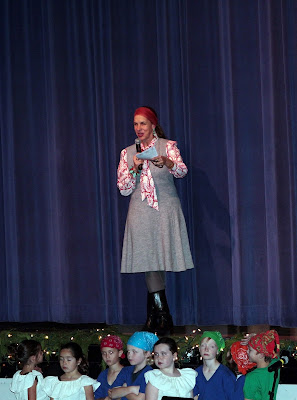 Explained Columbian-born Pagliai, who studied at UCLA and has been an Angeleno for more than three decades: “I founded the school because I wanted my children and the children we teach to make a better world, to really start from an anti-bias curriculum in which we all will experience a diverse community where we are a better people because we understand others and are more alike than different.

“Why would I like kids dancing?” asked Pagliai. “Because learning the movement and the music is all about sensory integration and through dance you learn about the choreography, about the costumes, about the stage, and then you’re part of a bigger world.”

It was also important for Chahin to incorporate students from Sheenway School, as Seven Arrows and the Watts-based school have a partnership. Founded in 1971 by Dr. Herbert A. Sheen several years after the Watts riots, the school is headed by the late doctor’s daughter, Dolores Sheen, affectionately known as “Aunt Dolores.” 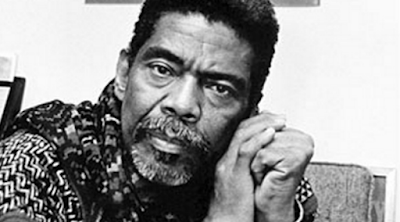 Chahin, who has volunteered at Sheenway for a decade, also wanted the Revelations performance to have a personal connection to Alvin Ailey (right). Because it was at Sheenway that Ailey, whenever he was in town, or what Sheen refers to as the ‘hood,’ taught both beginning and master classes to community youth. A recent rehearsal, which was the students’ fifth and final week several days before the concert, was held on a small, concrete area in front of the outdoor amphitheater at Seven Arrows, framed by a basketball hoop and colorfully-painted wall. It was a windy and brisk day, with the students practicing their moves in the opening segment, I Been Buked, their bodies lunging, their faces intent, heads looking up.

An ebullient Sheen, swathed in layers of clothing and a knit cap, beamed. “I’ve seen Revelations at least a dozen times over the years, and I noticed a few of the boys mouthing the lyrics. They were feeling the music. All of the children were focused and all of them were interested, which made them interesting and a joy to watch. Alvin would have been proud.” 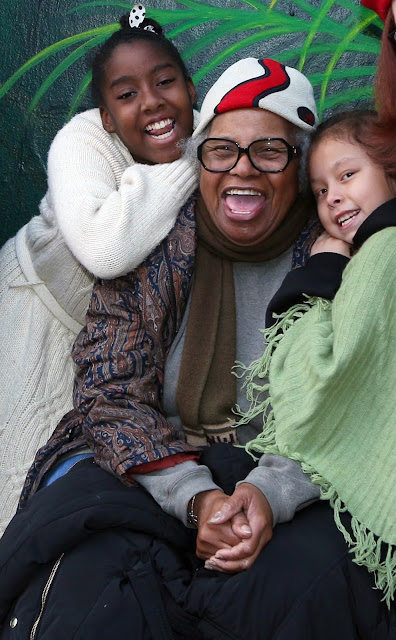 “It gives you hope,” added Sheen (right, with two Sheenway students) “because you know there’s another generation coming up that can absorb, that can feel, that can know. To see the boys and to see the integration – it’s just so natural to them. I’m enthralled.”

The excerpt known as Sinner Man, normally a fast-paced trio for men featuring dazzling leaps and pirouettes, was, in Chahin’s able hands, a rush of excitement with 20 children crossing paths, jumping and ending with a kind of break-dance flourish for the boys.

The kids also rehearsed Rocka My Soul (derived from Ailey’s memories of going to church on a hot summer day; photo below), the finale that virtually dares one to sit still, with the sixth grade girls sporting fans and the boys strutting their stuff while preening in vests. 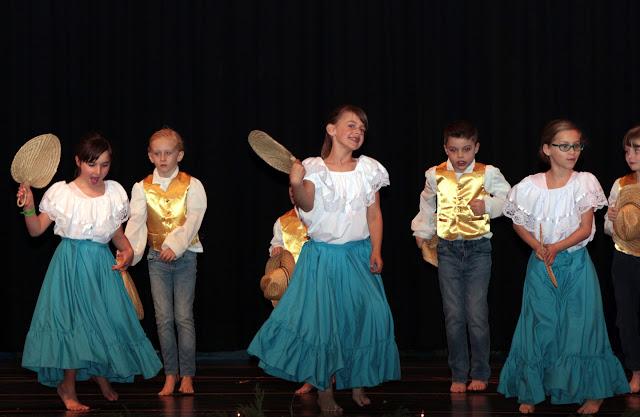 After working out this section’s kinks, one of the students, Danielle, explained her thoughts: “I like dancing to this music because it represents African-American culture and the hope they have. I think throughout the recital it’s all about the slavery and all kinds of depressing things, but this song is about finally having hope after everything they’ve gone through.” 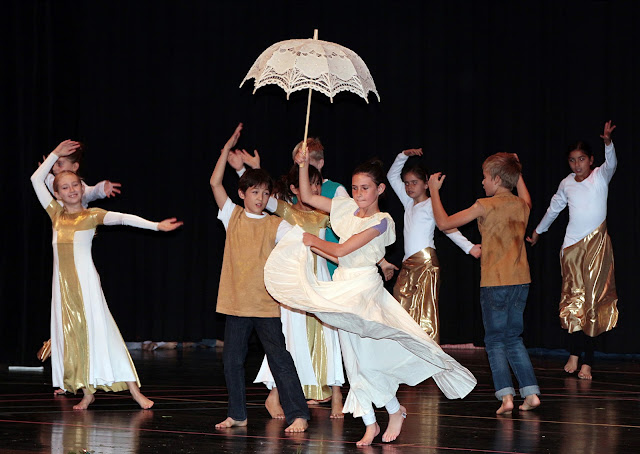 The evening of the performance, Revelations came to life once again, this time with a vigorous display of determination and unabashed jubilation, 130 children proudly executing steps with bravado. The mood was also evident in the popular and instantly recognizable excerpt, Wade In the Water, which represents a woman preparing for baptism, and is both sacred and rapturous. Here were the children rippling sheets of fabric across the stage while others revealed surprisingly lovely arabesques. Musicality, determination and a sense of fun also made for a tangible feeling of accomplishment.

After the final bows were taken, the audience of about 400 – gushing parents, friends and family members – let out a thunderous roar of applause, proving that hope not only coursed throughout the 30-minute dance, but was also very much alive and well in a truly wondrous and miraculous show of spirit.

Our future, in other words, is in very good hands – and feet! 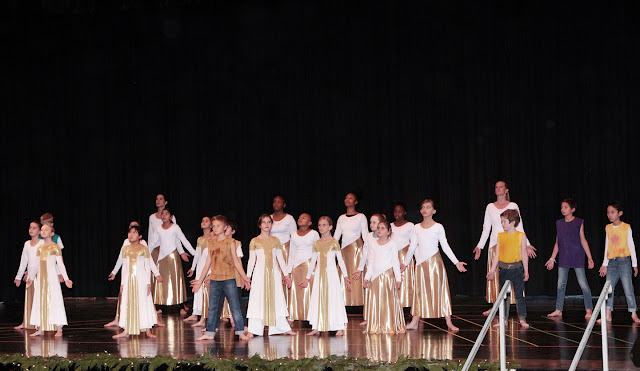 (All photos, except Alvin Ailey and AADT‘s Revelations by Roy Sadakane.)

Happy holidays and a joyous 2016 to all! 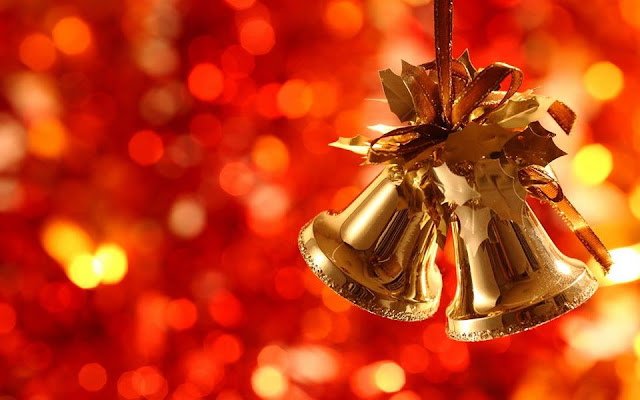